Investors love stocks that consistently beat the Street without getting ahead of their fundamentals and risking a meltdown. The best stocks offer sustainable market-beating gains, with robust and improving financial metrics that support strong price growth. Does Shanda Games (NASDAQ: GAME) fit the bill? Let's take a look at what its recent results tell us about its potential for future gains.

What we're looking for
The graphs you're about to see tell Shanda's story, and we'll be grading the quality of that story in several ways:

What the numbers tell you
Now, let's take a look at Shanda's key statistics: 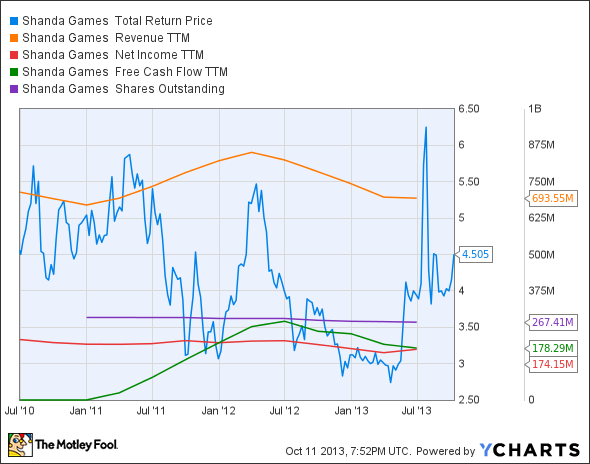 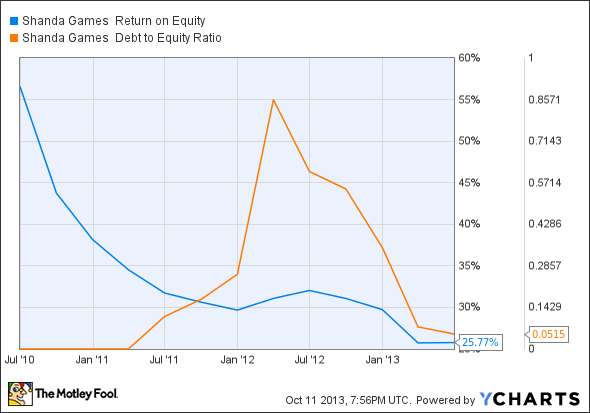 How we got here and where we're going
Things don't look good for Shanda today. The Chinese online game developer mustered only one out of seven possible passing grades, which was certainly helped by the fact that its free cash flow began our tracking period as close to zero as possible. Over the past year, Shanda has confronted sluggish revenue growth due to a shrinking user base, and but despite that decline, the company's share price has been roughly flat for three years. How might Shanda reverse these unpleasant trends? Let's dig a little deeper.

Over the past several quarters, Shanda experienced numerous challenges due to continuing economic weakness in China. However, the Chinese gaming market is still expected to grow by 16% per year to reach $22 billion by 2017, according to IDC. The rapid dispersion of smartphones across Chinese markets also provides tremendous opportunities for Shanda, which makes a substantial part of its revenues from mobile offerings. Fool contributor Harsh Chauhan notes that Shanda has made excellent moves in mobile gaming, launching Million Arthur, which stands among the top-grossing games on Google Play and the Apple Store. The company has plans to release 36 mobile games including Final Fantasy XIV and Dungeon Striker, and it expects mobile gaming revenue to increase by 50%, year over year.

Shanda recently acquired two of its affiliates, Shanghai Shengzhan Networking Technology and Tianjin Shengjing Trade Company for $812 million, but Shanda shares plummeted by more than 21% as the market saw the deal as poorly priced. The company also announced the launch of a new mobile platform, G-Home, which could draw in its massively multiplayer online (MMO) game subscribers to its mobile offerings. Harsh Chauhan notes that Shanda is trying to strengthen its position in the online gaming market, as it plans to release expansion packs for Mir II and Woool this year. The company has also announced a $100 million share repurchase plan, which is expected to run through May 2014, so it clearly seems to consider its position a strong one.

On the other hand, Giant Interactive (NYSE:GA) has provided fierce competition in the MMO space through its new offering World of Xianxia, which attracted more than 100,000 gamers on the first day of its commercial launch. Giant also released The Sky and Genesis of the Empire  to bolster its position in the web-based games segment. Shanda's rival NetEase (NASDAQ:NTES) has also been a strong competitor in the MMO space with games such as Heroes of Three Kingdoms and Dragon Sword, and it plans to launch Legend of Tibet by the end of this year. Let's not forget that NetEase also maintains the Chinese license of World of Warcraft, which has become a detriment to the company as Chinese gamers look elsewhere for new dragons to slay. Changyou is also set to capture some of this hotly competitive market with the release of DD Tank and Wartune on mobile platforms. At the moment, Shanda's valuation seems appealing in the single digits, but many of its peers are in a similar position, indicating little faith in the future of Chinese game developers.

Putting the pieces together
Today, Shanda Games has few of the qualities that make up a great stock, but no stock is truly perfect. Digging deeper can help you uncover the answers you need to make a great buy -- or to stay away from a stock that's going nowhere.