Newfield Exploration (NYSE:NFX) is among the growing number of oil companies that have realized it's time to come home. In selling off its Malaysian assets, it's joining many of its peers in selling international assets to focus its attention on finding more oil here at home. However, just because everyone else is selling off international operations, does that mean Newfield isn't making a mistake?

While investors don't talk about Malaysia all that much, it's actually a great place to explore for oil and gas. It's the second largest oil and gas producer in Southeast Asia. Malaysia also holds the fifth largest oil reserves in Asia-Pacific while also ranking in the top 30 globally. It's both resource-rich and located very close to China, which has quite the appetite for energy.

That combination is great for profit margins. In fact, both ConocoPhillips (NYSE:COP) and Murphy Oil (NYSE:MRO) see the country fueling both margins and production growth. For ConocoPhillips its production growth in Malaysia will be the most profitable among its major projects. Meanwhile, Murphy Oil is spending 42% of its development budget this year. Murphy Oil sees outsized returns because Malaysia gets some of the highest prices for its crude oil in Southeast Asia.

That's why one has to wonder if Newfield Exploration is hastily exiting the region. Its efforts in the region were just starting to bear fruit. Earlier this year the company announced a significant offshore natural gas discovery. It was actually the company's largest discovery in its history. So, clearly Newfield's position in Malaysia has value.

Why exit?
While Malaysia offered solid growth potential for Newfield Exploration, it currently has its hands full in areas like the Cana Woodford, Bakken and Eagle Ford. It determined that focusing on where it could excel would be better for its investors. Further, bringing its recent offshore discoveries online would take more time and capital, whereas onshore growth could be realized much more quickly. 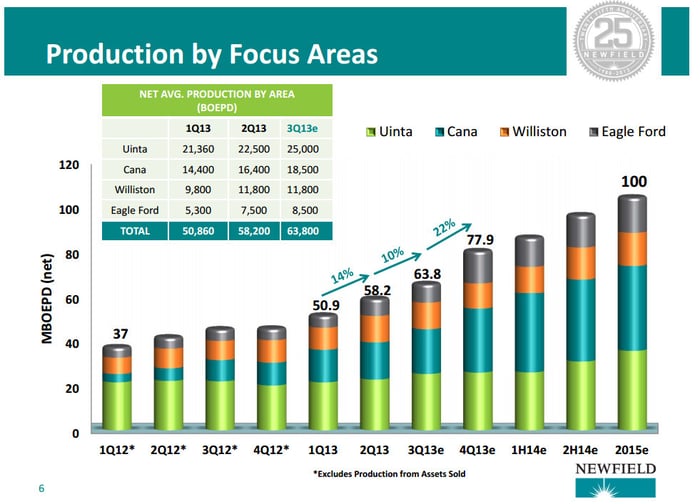 Its position in the promising Cana Woodford is really driving production growth. The returns are pretty good too. Despite well costs of more than $10 million per well, Newfield is enjoying rates of returns of more than 40% on each well it drills. Returns, however, should improve as the company focuses its efforts on driving its costs down.

As it turns out, ConocoPhillips is a really good model of this approach. The company has been trimming its portfolio to focus only on those areas where it can excel. Because of that focus, it should be able to boost its profit margins by 3%-5% annually over the next few years.

Investor takeaway
Malaysia had the potential to be a very solid part of Newfield's portfolio. That being said, the costs to bring those assets into production and the time requirements just didn't fit within the company's current plan to get better at home. So, it's not making a mistake. Instead, it's choosing to hold on to areas where it can excel and cash in on areas that it can't.

How to join Newfield Exploration in profiting from America's energy boom