Ultra Petroleum (OTC:UPLM.Q) finally struck oil. After striking out in Colorado, the natural gas producer decided it was easier to buy than to build. That's why the company is spending $650 million to pick up oil assets in the Uinta Basin of Utah.

Ultra is not the only company that has turned its attention to this lesser-known oil play. LINN Energy (OTC:LINE.Q) will pick up Berry Petroleum's (NYSE: BRY) Uinta Basin assets when it's finally able to close its acquisition of Berry. Meanwhile, Newfield Exploration (NYSE:NFX) has used its steady growth in the Uinta to help fund exploration activities elsewhere. The question is, why are these companies drawn to this seemingly obscure oil play?

Why the Uinta Basin
The answer is actually quite simple -- these oil rich assets offer great returns. While the basin's growth and size aren't on par with hot plays like the Bakken or Eagle Ford, it's a solid oil play that provides producers with a ton of cash flow. Wells can be rather inexpensive to drill but produce enough oil to yield exceptional returns. Slow-growth, cash-gushing assets like this are perfect for LINN Energy's income-focused business model. Others like Newfield Exploration prefer to reinvest the cash flow from the Uinta into higher-growth assets like the Cana Woodford Shale.

Ultra Petroleum's interest in the Uinta is about earning its investors better returns. While its natural gas-heavy portfolio has yielded tremendous growth over the past decade, returns have been subdued lately as the price of natural gas has remained low. That forced the company to pull back on its growth and only focus on its highest returning projects.

In fact, as the following slide points out, the company will enjoy prodigious free cash flow over the coming decades. 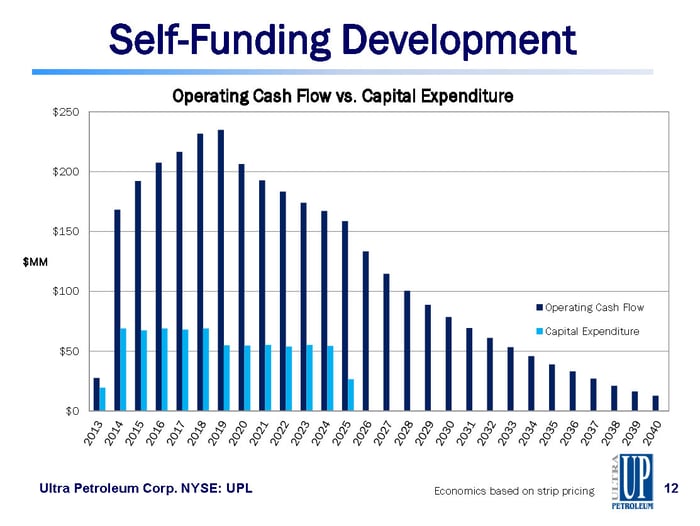 Basically, the addition of the Uinta Basin gives Ultra Petroleum a bridge asset to fuel higher margin returns until natural gas prices pick up. That's why in one sense this is more of a financial asset. Ultra can use the cash flow it throws off to reduce its leverage or to invest to grow its natural gas production.

What could go wrong?
Ultra Petroleum investors might need to watch for potential infrastructure constraints which have in the past put pressure on margins and slowed production growth. For example, Berry Petroleum delivered basically flat production last quarter. To fix the problem Berry turned to transporting more crude oil by rail and now has 100 rail cars in service to get its oil out of the region. That's also the route Newfield Exploration has taken with some of its oil -- it shipped a quarter million barrels of oil by rail last quarter to markets outside of Utah. Ultra's plans to slowly grow production could be derailed by similar infrastructure restrictions.

Investor takeaway
Overall, this looks like a solid acquisition for Ultra Petroleum. It should deliver increasing free cash flow growth through the end of the decade. Bottom line here, Ultra is buying itself a nice bridge asset to improve its returns until natural gas prices pick up.

How to invest in America's energy boom