Mobile ad spending will hit $13 billion this year, Juniper Research estimates. Over the next five years, however, the market will grow substantially larger. Juniper Research projects it to grow at a rate of about 24.5% annually, reaching $39 billion by 2018. Of course, there will be more than one advertiser vying for these ad dollars. In particular, Google (NASDAQ:GOOGL), Facebook (NASDAQ:FB), soon-to-go-public Twitter (NYSE:TWTR), and even LinkedIn (NYSE:LNKD.DL) will count themselves among the heated competition.

The stunning growth
Mobile advertising may be just a few years old, but that doesn't mean it's not important. If anything, mobile strategies have become a primary focus for companies that obtain a large portion of their ad revenue from online advertising. In the U.S. alone, mobile ad spending has grown from $1.48 billion in 2011 to an estimated $7.29 billion in 2013, according to a March report from eMarketer.

To see the importance of the mobile advertising market visualized, we just need to look at Facebook. 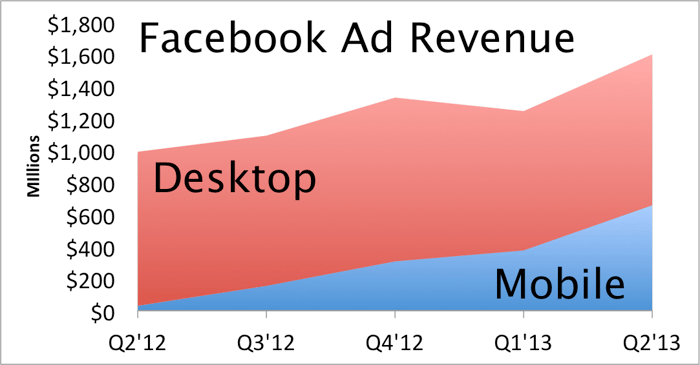 With one look at the chart above it's easy to see why mobile strategies are more important today than ever.

Google's position in mobile is the most certain. eMarketer estimates that Google will take home more than half of mobile ad revenue in 2013. Given the company's dominance in global advertising, Google just needs to help its current clients shift over to a multiscreen advertising environment successfully. Apparently, Google is doing this effectively; eMarketer estimates that Google's share of worldwide mobile ad revenue has grown from 38% in 2011 to 53% in 2013. Even more significantly, the company's third-quarter earnings provided incremental confidence in the company's ability to succeed in mobile, with its Enhanced Campaigns looking better than ever.

Facebook's future is looking solid, too. With an estimated 15.8% of 2013 worldwide mobile ad dollars, according to eMarketer, Facebook trails meaningfully behind Google but far ahead of third-place Pandora, hovering at 2.37%. Even more, eMarketer estimates that Facebook has grown its share of worldwide mobile ad spending from zero in 2011 and just 5.35% in 2012. With Facebook executing on mobile opportunities so rapidly, the company will certainly capture some of this mobile ad revenue growth going forward.

Twitter's mobile ad revenue, at just an estimated 1.85% of worldwide mobile ad spending, looks less certain than Facebook's and Google's. On the flip side, in the company's most recent quarter, its mobile revenue increased a whopping 37% sequentially to 107.4 million from 78.6 million. Twitter's slice of the pie may be small, but there's huge incremental upside potential.

With LinkedIn's total ad revenue at just $85.6 million in the company's most recent quarter, its mobile revenue is certainly smaller than Twitter's. But, given a Bloomberg report this week that stated the company expects half of its users to come from mobile next year, mobile is bound to play a large role in its advertising. Notably, however, advertising revenue only makes up 24% of LinkedIn's total revenue, so it's a relatively small portion of the company's total business.

Room for everyone?
Based on the underlying stories from these poster-child examples, it seems that there's room for rapid growth in mobile for everyone. And with the market growing so fast, that's probably true. But with every opportunity comes a challenge. As advertisers shift their marketing budgets away from desktop advertising and toward mobile advertising, they're going to be looking for solutions. And once they find solutions, they may develop relationships. And once they develop relationships, they might stick around for a while.

As mobile ad revenue continues to heat up, investors should keep a close eye on advertisers' and social networks' progress in mobile. Though the market might still be a minority advertising solution, there likely will come a day when mobile advertising will be a bigger market than desktop advertising -- and it's probably not too far off.