Please ensure Javascript is enabled for purposes of website accessibility
Log In Help Join The Motley Fool
Free Article Join Over 1 Million Premium Members And Get More In-Depth Stock Guidance and Research
By Morgan Housel – Oct 26, 2013 at 10:00AM

There's no such thing as a free lunch.

Nearly four million Americans earn the minimum wage of $7.25 per hour, according to the Bureau of Labor Statistics.

That's not a lot of money. Even clocking in 40 hours a week, a minimum wage job will bring in just barely $1,000 a month after taxes -- and about half of minimum-wage employees work less than 30 hours a week. Nationwide, the average rent on a one-bedroom apartment is $1,091 a month. A portion of minimum-wage workers are teenagers or college students living with their parents or roommates, but any way you spin it it's hard for one person to get by in America on less than $1,000 a month, let alone a family.

So how do millions of Americans do it? This statistic helps explain it:

More than half of fast food workers have to rely on public assistance programs since their wages aren't enough to support them, a new report found.

According to a University of California Berkeley Labor Center and University of Illinois study out Tuesday, 52% of families of fast food workers receive assistance from a public program like Medicaid, food stamps, the Earned Income Tax Credit and Temporary Assistance for Needy Families. That's compared to 25% of families in the workforce as a whole.

Assuming fast-food workers are good proxy for minimum-wage workers, this actually explains a lot. If it sounds impossible to get by on less than $1,000 a month, that's because it probably is, and most minimum-wage workers don't. They earn a wage that isn't sufficient to support them, and various government assistance programs make up the difference.

Public assistance isn't just for those out of work, down on their luck, or in a short-term bind. It's for those who are gainfully employed but earning such a low wage they can't sustain themselves. Which is to say: The reason fast-food and other low-wage employers can get away with paying so little is because taxpayers subsidize the slack. The report estimates McDonald's (MCD 1.34%) subsidy alone is worth $1.2 billion a year, which equates to more than a fifth of its 2012 profits.

Here's one way to think about this. Since 1969, the real (inflation-adjusted) minimum wage has declined by about 30%, from more than $10 an hour to $7.25 an hour. During that period, the percentage of Americans receiving food stamps surged: 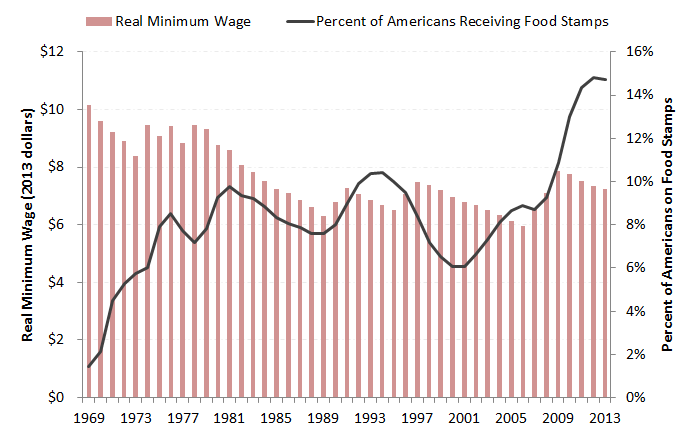 This isn't all causation. Food-stamp eligibility has shifted throughout the years, and changes in unemployment shifts the number eligible for assistance.

But we know three things. One, there's a positive correlation between the real minimum wage falling and the number of Americans on food stamps rising. Two, wages as a percent of GDP are near an all-time low, and corporate profits as percent of GDP are near an all-time high. Three, the issues that anger Americans more than almost any other are the weak jobs market and high government spending. All three of these are related to each other.

I don't have an solution for it. Maybe assistance needs to be cut, forcing workers to raise pay. Maybe the minimum wage needs to be raised, relieving the number of Americans on assistance. Either way, remember the first lesson of economics: There is no such thing as a free lunch.

The Big Mac ATM Has Arrived

3 of the Worst Stocks to Own in Retirement

10 Futuristic Trends That Could Change the World