There are two key conclusions to be drawn from International Business Machines' (NYSE:IBM) recent results. First, for the third quarter running, they were disappointing, and second, the stock is still cheap. Growth-oriented investors probably won't be turned on by such considerations, but value-based speculators may see IBM as too good to pass up.

IBM disappoints, but reaffirms targets
To put these results in context, here is a graph of its major business segments. 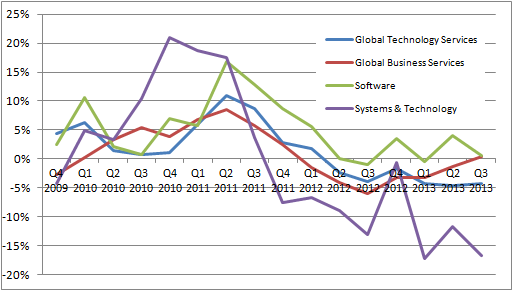 Clearly, the last six quarters have been difficult for revenue growth. However, it is understandable because IBM's focus has been on exiting lower-margin businesses and focusing on reshaping the business toward higher-margin software and services sales. Moreover, its stated aim is to hit $16.90 in non-GAAP adjusted EPS for 2013, and ultimately hit $20 in EPS by 2015. Eagle-eyed readers will note that these earnings would put IBM on P/E of 10.2 and 8.8 times its 2013 and 2015 forecasts, respectively. Since management reinstated these targets, should investors just ignore the falling revenue and buy a cheap stock?

Believing the numbers
Ultimately, your decision will boil down to how much you believe in the numbers. The latest evidence suggests that the underlying picture is getting murky.

In fact, the only segment that really performed well was its global business services segment, or GBS, which delivered constant currency sales growth of 5%. This was in-line with IBM's forecast of mid single-digit growth.

All told, this was a weak quarter for IBM. In common with its major rival, Oracle (NYSE:ORCL), IBM reported good growth in business analytics (up 8% year-to-date) and proudly trumpeted that it delivered $1 billion of cloud revenue in the quarter.However, cloud revenue only represents 4.2% of total sales, and the strength in business analytics highlights the fact that there is growth in IT spending, just not in the areas where IBM gets most of its revenue.Trends in software spending clearly favor software as a service companies like Salesforce.com (NYSE:CRM).

Comparing IBM with Oracle
The analogy with Oracle is a strong one. Both are highly cash-generative tech giants with cheap valuations. Both are facing some structural challenges to their hardware offerings due to an increasing willingness among firms to outsource technology infrastructure to the cloud. As usage of software as a service, or SaaS, increases, hardware margins could come under pressure for IBM and Oracle because corporations will not need to buy hardware systems to run their on-premise on-license software. In their defense, IBM and Oracle are trying to migrate toward cloud-based solutions, but it's going to take time to work through the pressures on their existing sales.

However, there is one key difference between the two companies. IBM has set its stall out to achieve the $20 EPS target in 2015, while Oracle has much more flexibility to adjust to changing market conditions. It's good for IBM to laud the $8 billion it used to make buybacks (and there is still $5.6 billion remaining in buyback authorization), but investors surely wouldn't want the company to rack up debt just to hit the $20 EPS target. Moreover, IBM may be using resources that it could instead use to make strategic investments in growth opportunities.

How the Salesforce.com deal demonstrates Oracle's flexibility
IBM's net debt stands at nearly $27 billion (14.3% of its market cap),  while Oracle has $15.2 billion (10.1% of its market cap) in net cash and liquid instruments.  Simply put, Oracle is in a better financial position to make the kind of game-changing acquisitions that can help accelerate SaaS-based growth.

Moreover, with its recent strategic partnership with Salesforce.com, Oracle is demonstrating its willingness to work with a former rival. With Oracle now integrating Salesforce.com into its infrastructure, its mutual customers should benefit from being able to use Oracle infrastructure to run Salesforce.com's CRM applications, while also using Oracle's financial and HR applications. The deal should provide synergy for both companies.

The bottom line
Cost-cutting, buybacks, and foregoing revenue growth at the expense of profit growth are noteworthy. However, IBM is going to need a couple of solid quarters in order to convince the market that its long-term earnings objectives aren't affecting the way it reacts to changing market conditions. This is the third quarter in a row in which IBM has given disappointing results, and the company is running out of excuses.

Is IBM Compromising the Quality of Its Earnings? @themotleyfool #stocks $IBM $ORCL $CRM Next Article
Current