Make no mistake about it: 2013 has been a great one for shareholders in traditional grocery companies. The three largest players on the national scene have seen their shares rise by an average of 120%. 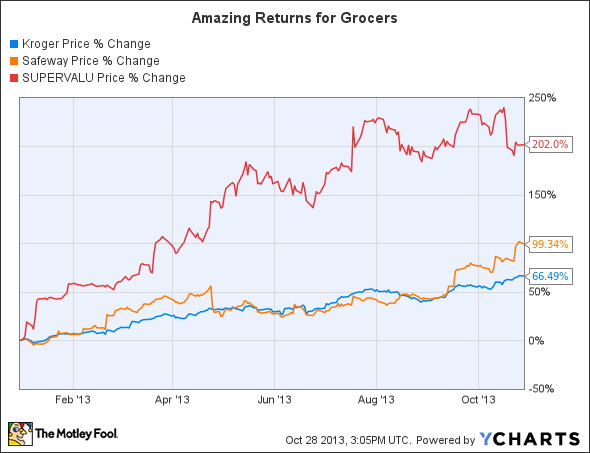 Not to be forgotten, smaller Midwestern grocer Roundy's (NYSE: RNDY) has also had a lot to cheer about: shares are up 107% on the year.

But that doesn't paint a very accurate picture of where any of these companies are headed operationally. Over the past two decades, stand-alone grocers have been pinched on the low end by megaretailers and on the high end by stores with a natural/organic focus.

While Kroger has been able to navigate this changed landscape fairly well, the same can't be said for SUPERVALU or Safeway (NYSE: SWY). SUPERVALU's surge has a lot more to do with selling off many of its major grocery chains, while Safeway's is the result of leaner operations plus incremental increases in market share.

If we were to zoom out and look at the five-year returns of these two, we'd see that they are underperforming the broader market by 25 and 130 percentage points, respectively, even after this year's surge.

Case in point: Safeway is rumored to be a buyout candidate and has announced that it will be selling off its Dominick's brand stores in Chicago. But in a strange twist, this move could breathe new life into the much smaller Roundy's stores.

A story of two franchises

Roundy's actually has five different chains, but they can essentially be split into two groups: traditional grocery (Pick 'n Save, Metro Market, Rainbow, and Copps) and natural/organic grocery. The company's Mariano's Fresh Market is the chain that fits into the latter category.

The view from 30,000 feet is that Mariano's is hitting the ball out of the park, while the rest of the players continue to be a drag. The problem is that while there are 11 Mariano's stores -- all located in Chicago -- the traditional segment of the business has 150 locations. There simply aren't enough Mariano's locations to balance out the overall poor performance by the other chains.

To get an idea of what I'm talking about, look at Roundy's same-store sales since the company went public: 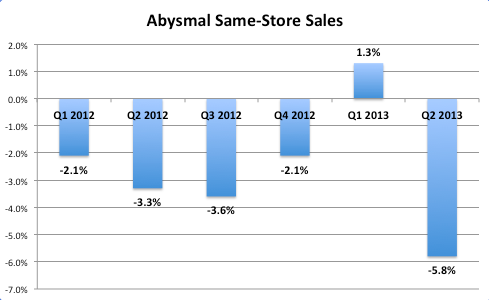 Though the company doesn't break out sales growth at Mariano's, it recently said that sales at the 11 locations have exceeded $1 million per week. Extrapolating those numbers, we see that though Mariano's only accounts for 7% of Roundy's total store base, it contributed almost 15% of the company's revenue.

Seen in another light, this means that all of the other stores under the Roundy's umbrella only average about $430,000 in sales per week -- less than half of what Mariano's is accomplishing.

Opportunity in Chicago
That brings us to Safeway's recent announcement that it would be exiting the Chicago market. Previously, Roundy's had estimated that the Chicago market could support 30 Mariano's Fresh Markets, and the company planned to add five new locations per year until it hit that goal.

But with Safeway leaving the scene, the size of the ideal store base could grow, and new store openings could accelerate. Currently, 68 Safeway locations are looking for new tenants, many of them located in ideal locations for an upscale grocer like Mariano's.

Safeway's exit also opens up a gaping hole in market share, as the company had a 9% share in the enormous greater-Chicago market. And though that share has shrunk over recent years, that has been primarily due to competition from discount chains -- not the type of place your average Mariano's shopper would frequent anyway.

Investors will want to pay close attention to what management has to say about the situation when earnings come out next Thursday, Nov. 7.