There are 315 million people and 13 million businesses in America. The tax code is 73,000 pages long. Visa and MasterCard process 4,000 transactions per second. Forty-seven million Americans are on food stamps, the 400 richest Americans are worth $2 trillion, 254 million antidepressant prescriptions are written annually, and in the time it took me to write this paragraph 13 Americans filed for bankruptcy, 22 were married, and 21 died.

The economy is so complex is it literally unfathomable. There are trillions of moving parts reacting to each other every second, often without making any sense or having any historical precedent.

One of the most dangerous things you can do is pretend the economy, or the stock market, is simple and easy to understand. It causes you to see patterns that are really just random flukes, and wrongly assume that if one lever is pulled over here, something predictable will happen over there. This is one reason clueless, passive investors often outperform professional ones. Clueless investors aren't tempted by false-insight masquerading as brilliance.

So take Munger's advice. If you want to do well, don't waste your time trying to be intelligent. Forget searching for patterns and correlations you think might explain the future. Instead, avoid being stupid by realizing what doesn't work, and what you shouldn't pay attention to.

But that isn't necessarily the case. What the economy does today tells you nothing about what stocks might do tomorrow.

This chart tells the story. 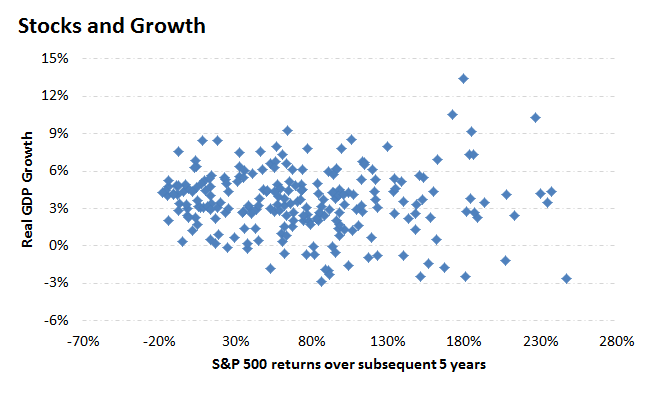 If you're a math geek, the correlation between current GDP growth and five-year subsequent stock returns is -0.06, or pretty much a random, drunk walk. Three-year forward-looking market returns aren't much different, at -0.09. For one-year returns, it's -0.21 -- still low.

This goes so deeply against intuition. Most of us want to believe that market returns are driven by a strong economy and corporate profit growth. In the long-run, they are. But the two don't move in lock step. Markets are priced based on what people will think will happen in the future. Today's reality is yesterday's news. That's why stocks surged in 2009 even though the economy was a complete wreck.

A lot of investors understand this. But read through explanations of why people want out of stocks, and you often get the same story: The economy's weak, unemployment's high, housing's a mess -- all of which may be true, but none of which may be relevant to investment returns. Save yourself some misery and stop paying attention to it.

Economic data
Want to know what the economy is doing right now? Pay no attention to initial economic reports. They will eventually be revised so many times that the only thing we know with confidence is that they are wrong.

Take the monthly jobs report, one of the most anticipated numbers of the month. Each report is revised seven times after its initial release; twice in the following two months, and once a year for five years after that. Deutsche Bank economist Joe LaVorgna tallied up all past revisions and found the average jobs report is revised up or down by 90,000 jobs, or nearly half the average initial number.

If I told you the temperature outside is 70 degrees, give or take 30 degrees, you'd know it's a useless figure and has no connection to the actual weather. And you definitely wouldn't act on it, putting on a heavy jacket when it might be 100 degrees outside. But we treat economic numbers with the same margin of error as stone-cold fact -- and we often act on them. Watch the madness of people frantically trading stocks after the initial jobs report is released. They are basically reacting to a coin toss. Do yourself a favor and don't follow them.

The economy and taxes
Want to know where the economy is headed next? Don't pay much attention to politics, especially tax rates.

This sounds crazy. Higher taxes take money out of the hands of productive workers.

But look at the evidence, and what seems obvious in theory is elusive in practice.

Take the top marginal tax rate and compare it to GDP growth. You get a big mess without much rhyme or reason: 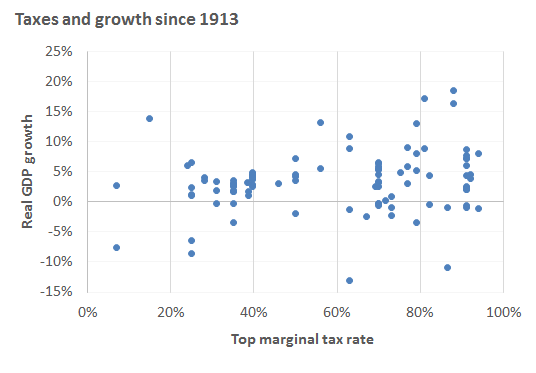 The best explanation here is that the advertised tax rate and the actual amount of taxes people pay are wildly different. Marginal tax rates only apply to a small segment of income, and deductions, write-offs, and loopholes can render them meaningless.

The United States has one of the highest corporate tax rates in the world, yet one of the lowest rates of corporate tax collection as a share of GDP. The top marginal income tax rate was 70% in 1981, and the average actual (effective) tax rate of top earners was 30.4%. By 2004 the top rate was cut in half, to 35%, but the average effective rate of top earners was barely changed, at 30.1%.

There is a huge difference between tax rates and the rate of tax collection. As long as that's the case, claims that raising/lowering marginal rates will hurt/help economic growth have to include an asterisks that says, "All else equal, which it never is, and even then, maybe, maybe not." There's just not a lot of evidence either way. I know of no one who has correctly called the direction of the economy or the stock market based on changes in tax rates, but I know many who have erred disastrously in their attempts. Most tax debates have more to do with political philosophy than economics. Keep your distance if you're interested in making money.

Most financial advice tries to make people better investors. I've come to the conclusion that it's more helpful to focus on how to become a less-bad investor. Realizing what we shouldn't do, and shouldn't pay attention to, is a good first step.