Industrial conglomerates like General Electric (NYSE:GE) make good bellwethers for different sectors of the global economy -- and if its most recent quarter's any judge, the economy's looking pretty good.

GE reports broad-based strength
With the sole exception of health care services, each of its six industrial segments reported growth in equipment and services orders.

The most surprising aspect of GE's report was how strong its power & water segment orders were. The segment has been GE's Achilles' heel this year, but wind units posted strong results, with 477 orders vs. 87 last year. Moreover, GE expects fourth-quarter power & water orders to come in at the higher end of its previous guidance. 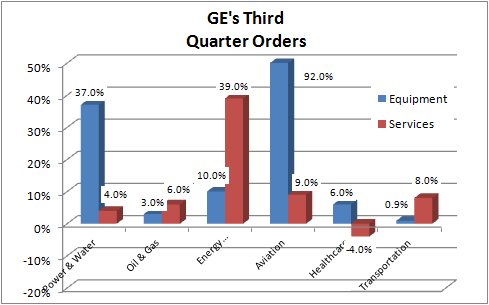 While it was posted a strong quarter all around, GE's quarterly results always need to be put into the context of ongoing trends, because big-ticket capital machinery sales tend to be lumpy at the best of times.

The key takeaways from GE's third-quarter results
While this quarter saw broad-based growth, there have been four consistent areas of strength in GE's results throughout the year.

GE's aviation revenue was up 12% in the quarter, but this increase belies a clear distinction between commercial and military aviation. For example, its military orders were down 30% in the quarter. In fact, this story has been replicated throughout the year, as investors have played a game of trying to find the aviation stocks whose revenue is weighted toward commercial aviation.

One obvious beneficiary of this trend is a company like B/E Aerospace (NASDAQ:BEAV). The company makes commercial aircraft cabins, and the stock has soared 57% year to date on the back of record order books at Boeing and Airbus.

Moreover, BE Aerospace just reported its own record order book of $900 million in the quarter, and it announced the first delivery of its modular advanced lavatory system. While that doesn't sound glamorous, the toilet gives airlines a few extra seats on their planes, which could help them increase revenue for each flight for years to come.

GE also announced that household appliances within its home & business segment increased 11% -- an ongoing source of strength. Similarly, Whirlpool has twice upgraded its expectations for end demand from the US.

This must be good news for the home improvement stores like Home Depot or Lowe's Companies (NYSE:LOW). Not only is the current upturn in the housing market helping out spending at Lowe's, but investors need to recall that we are coming up against the 10-year anniversary of the housing boom. In other words, Lowe's should start to see customers coming in and looking to replace white goods that they bought at the peak of the boom. Moreover, Lowe's is strategically resetting its product lines, which is a lot easier to do when markets are picking up.

The third key takeaway is that emerging markets offer far better growth prospects for health care companies. Within its health care segment, GE's developed markets grew 1%, while the emerging markets grew 14% with 33% in China alone. This is a clear sign that investors should be favoring a company like Covidien (NYSE:COV.DL), which can outgrow its health care markets. Covidien's big plus is that its products aren't big-ticket items -- an important quality when selling to emerging markets. Moreover, it can demonstrate a tangible return on investment with things like minimally invasive surgery, and its key endo-mechanical  and energy products still haven't gained much of a presence in emerging markets.

Where next for General Electric?
In conclusion, it was a pretty good quarter for GE, and the return to strength of its power & water segment confirms it's on track to hit analyst earnings estimates of $1.63 this year. This would put the stock at P/E ratio of around 16 -- not a bad value for a stock with a near-3% dividend yield and a good chance of growing faster than GDP over the next few years.