Isac Simon
(TMFPetra)
Author Bio
Specializing in oil & gas companies since 2011, Isac digs for attractive investment opportunities among mid-sized and smaller companies in the oil and gas industry. Additionally, he keeps a close watch on economic trends affecting the industry at large. Follow him on Twitter for the latest trends in the U.S. oil and gas space... Follow @isacsimon

Ultra Petroleum's (OTC:UPL) third-quarter results came as a pleasant surprise. With natural gas prices still on the road to recovery, the Houston-based company sacrificed production volumes for higher efficiency -- a move that turned out to be rewarding.

The numbers
Revenue for the third quarter rose 13% from the year-ago quarter to $221.2 million despite a fall in production levels. Total production stood at 57.5 billion cubic feet equivalent, or Bcfe, down from 63 Bcfe a year ago.

While I'd generally be skeptical of any move to reduce production, there are exceptions. And this happens to be one of them. Natural gas prices haven't been really impressive over the last 12 months. Ultra Petroleum had to cut down on production and instead focus on improving efficiency, which the company has been traditionally good at. In the process, it has further underlined its reputation as a low-cost producer. For the third quarter, its total cost for producing a thousand cubic feet equivalent of natural gas stood at $2.80, down from $2.88 in the year ago quarter.

Adjusted diluted EPS came in at $0.37, against $0.64 a year ago, thanks to realized losses on commodity derivatives due to hedging of natural gas prices. While this may look depressing, this is a sign of an improving natural gas market. Ultra Petroleum's hedged volumes fetched $3.41 per thousand cubic feet, or Mcf. However, the average unhedged price of natural gas inched up to $3.44 per Mcf, up from $2.77 per Mcf 12 months ago. If natural gas prices keep moving north, Ultra Petroleum stands to make a huge gain.

The move that matters
However, it's the latest move by the company that should attract investors' attention. Last week, Ultra Petroleum announced the acquisition of oil-rich properties in the Uinta Basin for $650 million. The strategic shift to oil production should boost cash flows while the company maintains its low-cost production of natural gas. With current net production of 4,000 barrels of oil per day and strong well economics from the acreage, management claims exceptional returns from this acquisition even if crude oil prices fall to $60 a barrel. What immediately comes to the fore is the typical cost-effective approach that Ultra Petroleum's management undertook in making this acquisition.

Comparatively, Ultra Petroleum should gain in the long run. Below is a comparison between the company and its peers in terms of well costs and economically recoverable volumes: 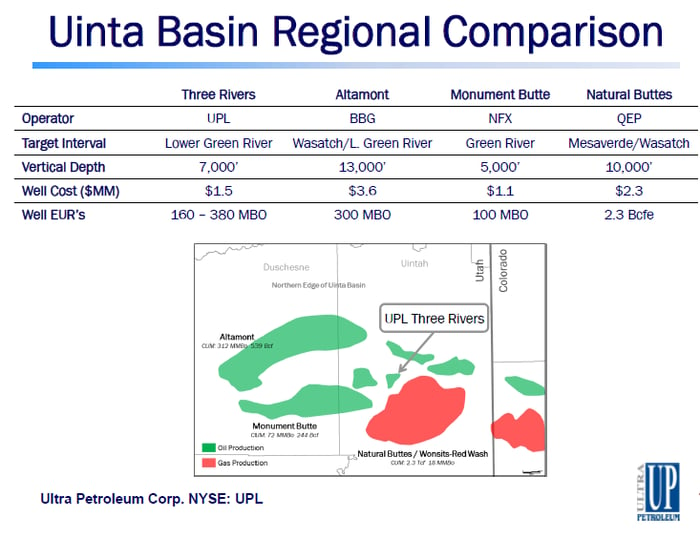 Bill Barrett (NYSE:HPR), a natural gas producer, has scripted a similar success story by increasing its liquids production. For the third quarter, the Denver-based company produced an average of 9,880 barrels of oil per day, or 25% of its total production. The market rewarded its impressive results with a solid 9% surge in its share price today.

Ultra Petroleum's move into oil production comes at just the right time. Though its debt levels are slightly worrisome, this is mostly due to an asset writedown rather than an alarmingly huge amount of debt in the company's books. A profitable move into crude oil production should help it generate enough cash flows to pay down its debt, which currently stands at $1.8 billion.

Foolish final thoughts
Overall, from a business perspective, this company looks solid. Despite a massive $2.9 billion asset writedown last year, the company has recovered strongly and has shown its resilience even under tough market conditions. While the road to recovery looks difficult, Ultra Petroleum is definitely on the right track.