Diageo (NYSE:DEO) is a global alcoholic beverage company that can lift your portfolio's spirits. Investors might be interested in knowing some strange but true facts about the company.

These 'bespoke' clubs, also called 'embassies,' allow members to craft a personalized whiskey alongside a master distiller or purchase one of the curated whiskey collections like the Epic Dates collection for 2,250 pounds, or $3,630.79.

An example of a Diageo scientific breakthrough is the process which makes Guinness available to establishments without kegs. Guinness is poured from a can, and then a burst of ultrasound knocks out the nitrogen and allows the same pour as from a tap. The company also pioneered the stabilizing of cream and alcohol, which created a new category of drinks, cream liqueurs.

Syl Saller, Chief Innovation Officer, told investors in May, "There are 3600 spirit innovation launches in the NABCA data base. In year five after launch, we still have 73% of our products in market vs. the category average of 32%."

Diageo is quite the acquirer, having purchased a litany of small companies worldwide and grown to its dominant position by acquisition. Most recently it purchased a Brazilian company that produces cachaca, a distilled sugarcane juice spirit, and bought stakes in Indian company United Spirits International, Halico in Vietnam, Mey Icki in Turkey, and added to its stake in Sichuan Shuijinfang Ltd, a Chinese company.

If any company were in Diageo's sights it would be French premium spirits company Pernod-Ricard (OTC:PDRDY) with its premium ABSOLUT and Chivas Regal brands and strength in emerging markets. However at a $32 billion market cap, slightly under half that of Diageo, Pernod-Ricard would not go down as smoothly as a slug of Chivas.

Still, with the No. 20 ranking Pernod-Ricard beat out both No. 21 Beam and No. 27 Diageo in the Forbes 2013 list of World's Most Innovative Companies. Don't cry for Diageo, though; its five year annualized total return rate of 16% beat both peers.

The company also creates interest at point of service at bars, etc, with unique theatrical pourings such as the 'Copper Kettle Serve' for Ketel One, which envelops the glass with smoke as it's poured from a copper kettle, or the Zacapa brand service, which features cinnamon-vanilla smoke as it is poured, which led to a 58% increase in sales for Zacapa in Italy.

As Saller said in the company's Innovation webcast, "What you drive, what you wear, what you drink says a lot about you. [At Diageo] in everything we do, we can monetize beauty." As an example, the Bailey Irish Cream bottle was designed by famed jewelry designer Stephen Webster 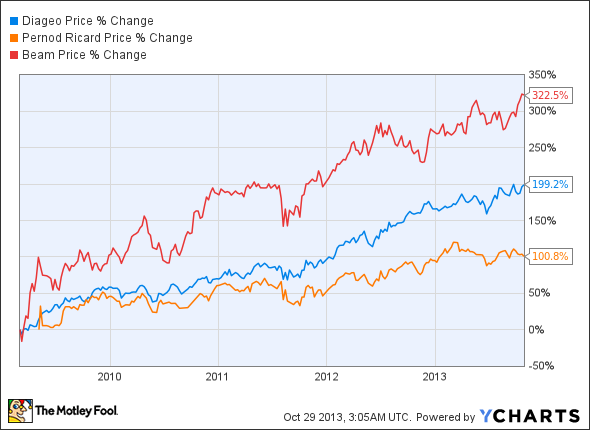 The Foolish takeaway
Diageo is certainly an interesting company, and a profitable one too. These fun facts allow insight into the innovation and growth strategies of the company: a focus on emerging markets, more premium brand profits, and more R&D, all of which combine to make Diageo a great investment.