At first glance, an adjustable-rate mortgage, or ARM, is a rather eye-opening thing. It boasts the lowest interest rates, and the payment made on the loan is often 15% or so less than on a traditional mortgage. Yet while these products may make sense for a variety of people in different life stages, there are a few reasons that would cause people to scratch this type of mortgage off their list of possibilities when buying a home.

ARMs come in a variety of options, but typically the payment is locked in at a lower interest rate for the first three, five, or seven years, after which it changes each year based on the going market rates. For example, at today's values, a person could have a 5/1 ARM with a rate of 2.69% for years one through five, but then beginning in year six and through year 30 -- 25 years in total -- the rate would change annually.

In the same situation, a person could secure a traditional 30-year mortgage at a rate of 3.8%, and the payment would stay the same over the life of the loan.

Although they can be compelling, ARMs faced a lot of scrutiny coming out of the financial crisis thanks to various attempts to manipulate them. For example, the the NINJA loan -- "no income, no job, and no assets" -- was an ARM product.

In an effort to better understand who would and would not be best suited for an ARM loan, I spoke with Jim Linnane, retail division sales manager with Wells Fargo Home Mortgage. Although the ultimate decision is up to the individual and not the banker as to what product is the right one, Linnane stressed the need for each person to make an informed choice when considering any financial decision and noted three reasons an ARM may not make a whole lot of sense.

1. You're buying a home, not a house
Those are my words and not Linnane's, but he stressed that ARMs make a ton of sense for people who know they probably won't be in their home longer than five to seven years. But if a home is purchased with the intention of living in it for the duration of the mortgage and beyond, then a traditional mortgage, especially at today's radically low rates, is the preferred choice.

For example, a single 27-year-old buying a two-bedroom home knowing he or she will probably be married, have children, and move out of that house within the next five years would have a compelling reason to consider an ARM. However, a 35-year-old married couple with three children buying the home they plan on living in until they retire may not want the potential headache or risk that comes with an ARM.

Although there are certainly a lot of people would who want to consider an ARM depending on their circumstance, Linnane added that "with fixed rates as low as they are, there is no doubt that a fixed rate for many people is going to be the smartest choice."

2. Your income is stable
A stable income is a great thing. Yet one of the compelling reasons to get an ARM, Linnane said, is that if your income is likely to grow by a significant amount in the future -- consider a doctor in residency, or an executive at a company. Therefore, if you're in a stable job in which your income will probably stay relatively the same, save for some modest raises, an ARM may not make much sense at all. That's because, at the end of five years, your rate is likely to climb, and it could climb dramatically.

Consider the example of 2.69% ARM versus a 3.8% traditional mortgage.

Now, if your income rose by 60% over that time period, this kind of mortgage increase might be a shock, but on a relative basis it would all net out. But for many of us, a 60% rise in housing costs would be a big deal. And let's face it: A 75% rise in income is pretty unlikely.

3. You have savings, but you still run a little lean
One of the benefits of the Great Recession was that it forced Americans to reevaluate their financial positions -- and many people began saving more of their income. 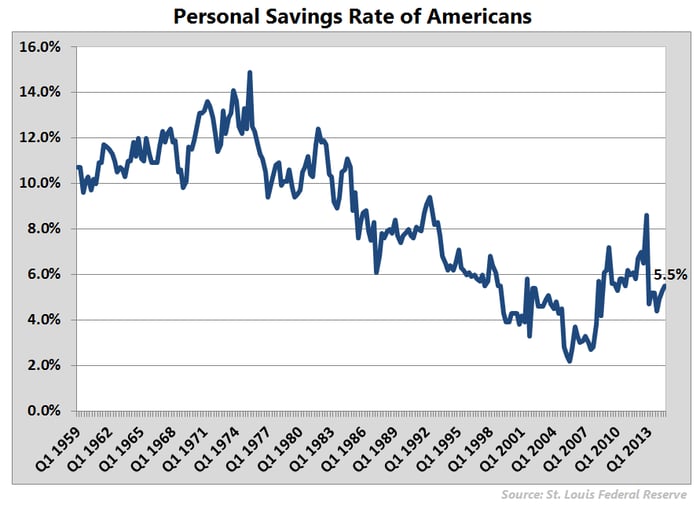 But although our savings rate has risen, many of us still don't have quite the savings we need to feel comfortable with the prospect of a rising mortgage payment.

Going back to the same example from earlier, if rates rose just 2.5% over the first five years, the mortgage payment of the 5/1 ARM would jump to almost $850 in year six, an increase of $200.

While this isn't nearly as dire of an example as the 5% increase, it would still mean an additional $2,800 in mortgage payments in year six alone. Not having a comfortable savings buffer to help eliminate the burden caused by a potential increase in rates is another reason that would eliminate an ARM from your consideration.

The bottom line
If you're thinking about buying a home, there's probably a mortgage that will specifically suit your needs. And with the right amount of digging you can figure out exactly what that is, whether it be a 15- or 30-year fixed rate, or a 5/1 or 7/1 ARM, or anything in between. Just make sure to do your research to figure out what the best option is for you and your finances.