One thing that makes the energy sector so intriguing is the constant overlap between markets and politics. In many ways, energy security is synonymous with national security, and the supply and demand needs of the oil market can make the most unlikely bedfellows. One country that has been at the center of energy and politics for decades has been Israel. For years the country has been dependent upon foreign energy sources, but a major discovery by Noble Energy (NASDAQ:NBL) and its partners has turned this situation on its head. Let's look how this massive natural gas find could affect both the political landscape and the pockets of major oil companies like ExxonMobil (NYSE:XOM).

With a name like Leviathan, it has to be big
In 2010, Noble Energy and its partners found something in Israel's offshore region that the country had been looking for since the oil embargoes of the 1970's; its own hydrocarbons. You might say that the company and the country found more than they could have hoped for. The Tamar and Leviathan fields are estimated to have as much as 30 trillion cubic feet of natural gas, which is enough gas to supply Israel for decades even if it were to convert all of its energy consumption from coal and oil to natural gas -- with enough left over to export. Noble Energy estimates that this gas field and the planned export projects could net the country more than $130 billion in energy savings and government revenue from gas royalties. 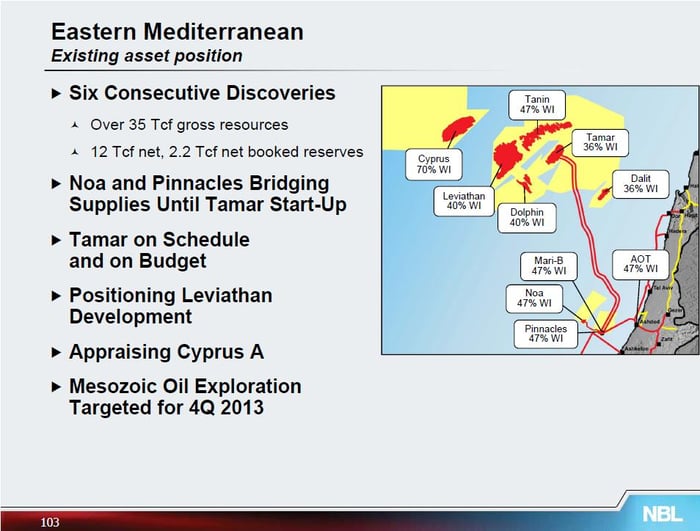 Of course, Israel isn't the only one making out from this deal, either. The nation's proven reserves account for more than 30% of Noble's proved reserves, and will likely be one of the company's premier energy plays for decades to come. On top of that, the U.S. Geological Survey estimates there are more than 600 million barrels of recoverable oil in the Leviathan field, which could boost the company's reserves by another 17%.

Game of Therms
Thirty trillion cubic feet of natural gas and 600 million barrels of oil is not a monumental amount in terms of the global energy landscape. But the combination of the size of the find, its proximity to a major demand center (Europe), and the fact that it's found in Israel could lead to several issues that might leave some major oil and gas powers not too happy.

Israel could disrupt the energy markets via liquefied natural gas terminals or a combination of pipeline and electricity cables. Noble has brought on Australian partner Woodside Petroleum to develop an LNG terminal for the Leviathan gas field and potentially a second site for an adjacent gas field in Cyprus. The Leviathan LNG terminal is projected to export about 0.85 billion cubic feet per day. Again, not much, but enough to displace 15% of the LNG market in Western Europe. 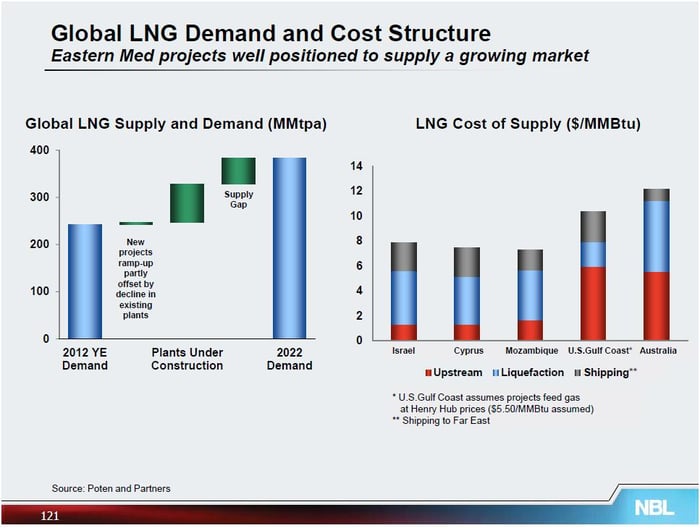 More importantly, though, Noble estimates that Israeli and Cypriot LNG terminals could together undercut both American and Australian LNG export prices, which could drive down natural gas costs for Europe. This could reduce the profitability of major LNG players like Qatar, where ExxonMobil has a 25%-30% working interest in two of that nation's largest LNG terminals.

An even more significant impact would revolve around the idea of supplying natural gas to Europe via pipeline. It may limit the market for Noble's natural gas, but it would probably generate higher profits per thousand cubic feet of gas because of the cost savings from skirting the liquefaction process. Also, since 40% of Europe's natural gas comes from Statoil (NYSE:EQNR) and Gazprom through very lucrative long-term pipeline contracts, Noble could carve out a nice position by displacing either the more expensive pipeline gas from one of these two players or expensive LNG imports.

Not being an expert in geopolitics, I'm not going to try to venture a guess as to how the political landscape will change in the Middle East. It is pretty fascinating, though, that Israel will go from an extremely energy-import dependent nation to a big-time exporter almost overnight. The country has plans to build pipelines to Jordan, the West Bank, and Turkey, which could improve both economic and political ties to these energy-starved regions. Then again, it could also go in the exact opposite direction and could be a prime target for groups or nations who may scuffle with Israel.

What a Fool believes
Noble Energy may have found a very large oil and gas field that could boost its bottom line for decades, but it found that asset in a place that has been the epicenter for religious and ethnic conflict for millennia. Even more, it may find that other companies are reluctant to join the project. Oil services giants Schlumberger (NYSE:SLB) and Halliburton (NYSE:HAL) have major contracts across the Middle East, and they are not likely willing to potentially lose those contracts in order to work with Noble in Israel.

Noble Energy investors and geopolitical watchers should be captivated by this story, because the next couple of years could be a wild ride.