Apple (NASDAQ:AAPL) likes to encourage the notion that the company has to spend money to make money. Apple recently released its fiscal year 2013 research and development budget, and though the amount increased significantly from the previous year, it's still about the same percentage of revenue the company's spent in the past -- and its much less than rival Microsoft's (NASDAQ:MSFT).

Conservatively investing in the future

In FY 2013, Apple's R&D expenses hit about $4.5 billion, up from $3.4 billion in fiscal 2012, an increase of 32% year over year. Though the percentage increase is significant, it's also meaningful for us to look at the R&D budget as a percentage of Apple's net sales.

So Apple has remained fairly consistent in keeping its R&D expenses just above 2% of its net sales. For comparison's sake, Microsoft spent $10.411 billion in fiscal 2013 for research and development from $77.849 billion revenues, which works out to be a little more than 13% of revenue.

The graph below is a good visual of just how much of a difference there is between Microsoft and Apple's R&D expenses over the past few years. 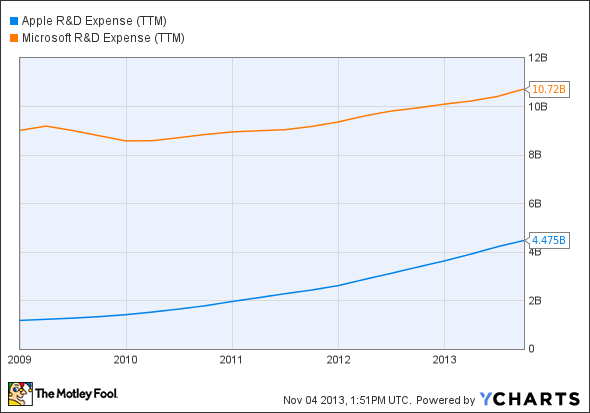 Apple isn't just spending less money, though -- it's also using that money very efficiently. Compared to competitors like Microsoft, Apple focuses its R&D money on a small amount of products and services. Investors should want to see a low amount of R&D spending and a high revenue output from that spending. Judging by the graph below, Apple has that ratio down pretty well compared to Microsoft. 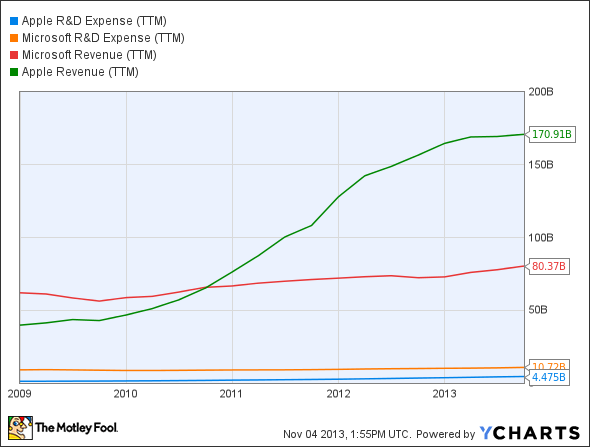 Investors looking for some clue as to what Apple has planned for its increase in spending should consider a possible iTV, an iWatch, or even an iPad hybrid. That's all speculation at this point, but as a fellow Fool pointed out, Apple historically enters a new market segment every two to four years, and the last time it did so was in 2010 with the iPad. So it would seem like a prime time for Apple to enter a new segment.

But whether or not Apple is on the cusp of releasing a new revolutionary product, Apple investors should be pleased the company can utilize a small percentage of its revenue for R&D and still be one of the market's top technology companies. Apple's been able to do this by focusing on a sparse lineup of products that help keep the company's spending in focus -- and so far it's paying off.