It's too early to know the real size of the market for wearable technology, but early reports and surveys suggest this is a huge industry in the making. Credit Suisse forecasts the market to ramp from $3 billion-$5 billion today to over $50 billion within the next three to five years.

As technology improves cost and performance, software developers join the game by actively producing apps for wearable devices and companies experiment with new business models. Wearable technology could go as far as replacing smartphones in the long run. Google (NASDAQ:GOOGL) and Samsung (NASDAQOTH: SSNLF) are already in the game, promoting smart glasses and watches. Cisco Systems (NASDAQ:CSCO), which designs networking and communications technology, could also benefit enormously, as wearable tech devices will need to be connected to the Internet. How can the retail investor benefit from this tech shift? 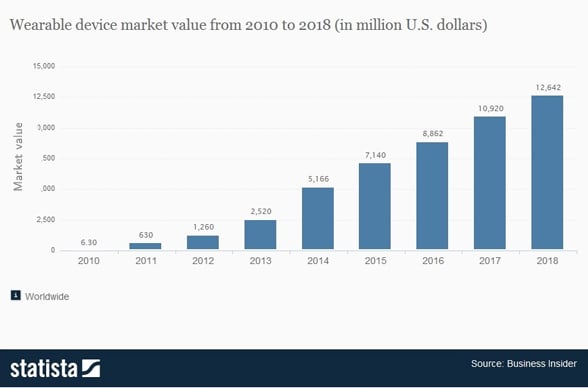 Google Glass is a huge market in the making
Google has direct exposure to the wearable market with its Glass device. To generate more revenue, Google may be targeting big corporations, rather than families or geeks. According to Quartz, members of Google Glass operations team have been showing the product off to medical companies, manufacturers, and hospitals.

It's not only about fashion. Google Glass has many potential uses in the industry. For example, it can be synchronized with inventory programs to save manufacturers thousands of dollars in compliance costs. It can be used in hospitals, where experienced surgeons could transmit to colleagues online what they see during a procedure. Fidelity Investments has already developed a financial app to help users monitor multiple markets at the same time.

The company used a clever marketing strategy to create scarcity in advance, preparing the road for a big release. Google only allowed 10,000 people to purchase Glass for $1,500 per device. This created scarcity and desire among consumers, with some eBay auctions receiving thousands of dollars in bids for the same device. Now, Google has allowed each first-generation customer to invite up to three friends, as it begins to prepare for a massive release.

Samsung's smart watch was released too early
Samsung is betting on smart watches to conquer the wearable tech world. It released its Galaxy Gear smartwatch in September. However, almost one-third of smart watches are being returned, according to a leaked document.

The Korean giant may have released its product too early. According to several reviews, Galaxy Gear is only compatible with some Samsung smartphones, and has several limitations. This has lead management to admit its smart watch lacks "something special." However, the fact that Galaxy Gear received massive media coverage shows that the concept of a smart watch is indeed intriguing. Samsung just needs to improve its product. The Galaxy Gear must work with several other smartphones to expand its potential market.

Cisco will benefit from increasing demand for connectivity
It's not only manufacturers of wearable technology that will benefit from this tech shift. Companies like Cisco, which provides integrated networking solutions to corporations, could benefit from an increasing demand for connectivity. The company's cash cow is its carrier routers and switching business, but wearable gadgets could become an important new source of revenue in the long term.

Wearable gadgets, from glasses to watches, need to be connected to the Internet. In the long run, these devices will also need to be connected with each other through sensors. These sensors will have to increasingly detect more data, provide more information to both people and machines, and become more context-aware. This is exactly what Cisco is good at -- connecting people, data, things, and processes.

Final Foolish takeaway
Wearable gadgets could become the next big thing. The market is said to be worth around $3 billion-$5 billion already, and there's plenty of room left for growth. Early this year, Juniper Research estimated that by 2017 there could be as many as 70 million devices. However, this figure might be conservative, as companies show plenty of intriguing possibilities and applications for their gadgets.