If I told you that a biotech company with a market cap of $350 million wanted to challenge two of the world's largest and most respected companies with a combined valuation 1,000 times higher, well, the conversation would likely be over. It sounds absolutely crazy at first, but biomanufacturing supplier Repligen (NASDAQ:RGEN) has biotech pioneer Amgen (NASDAQ:AMGN) and industrial conglomerate General Electric (NYSE:GE) in its sights with its latest product. It's only the company's first as far as manufacturing equipment goes, but it surely won't be its last.

Don't be a hater
I'll be the first to call out a tiny biotech that promises to tap into a multibillion-dollar industry just to woo investors. There are plenty of non-investment grade mulligans out there with that rhetoric, but Repligen is not one of them. For one, the company doesn't develop therapeutic medicines in clinical trials, instead focusing its efforts on commercial products in high demand throughout the biomanufacturing industry. That has no doubt paid off for investors, with management guiding for an operating profit margin between 30%-33% this year. 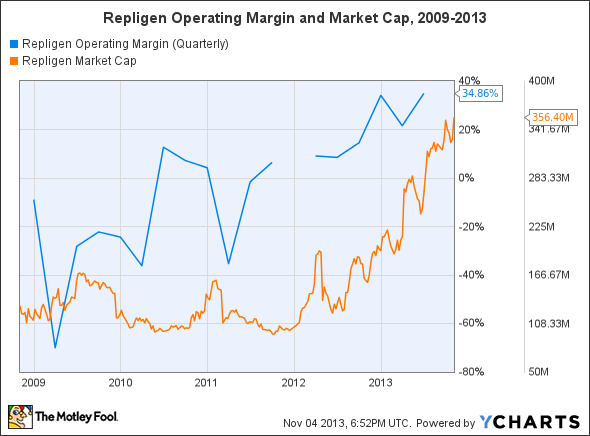 Nor will Repligen be competing with the primary businesses at Amgen (clinical biopharmaceuticals) and General Electric (um, everything?). The competition arises with each company's plans for providing industry-leading flexible and single-use manufacturing solutions for the biopharmaceutical industry.

The importance of innovative solutions
What the heck are flexible and single-use manufacturing solutions, and why are they important? First, let's note the difference between biologic drugs and synthetic small molecules. The former are produced in live cells, while the latter are manufactured in chemical reactions. Biomanufacturing is more expensive than its counterpart because the molecules involved (proteins, vaccines, etc.) are larger, more complex, and more difficult to replicate in an exact manner than simpler molecules derived from a chemical reaction.

Additionally, since biomanufacturing involves live cells companies must take extraordinary precautions to reduce the threat of contamination. Human or mammalian cells used to produce therapeutic compounds can be easily contaminated from human employees. Even facilities utilizing plant cells, such as tobacco cells, have the potential to be contaminated by viruses from human employees that smoke cigarettes!

The engineers in this cleanroom aren't wearing protective suits for the office Halloween party. Source: Xcellerex.

Companies take such amazing precautions because once present viral contamination can be extremely difficult to exterminate. However, cleaning every nanometer of equipment, piping, pumps, and transfer vessels after each production run can be very cumbersome and expensive. Although critical, cleaning equipment can take days and requires large amounts of water and energy -- adding considerable cost to the manufacturing process and the price of biologic medicines.

Building dedicated biomanufacturing facilities requires a sizable amount of capital, too. Companies need a lot of space and specialized equipment to meet regulatory standards, but may only produce several kilograms of product per year. Further putting that in perspective, consider that Genzyme's Framingham, Mass., facility only sported 8,000 liters of capacity when it was built, but cost $175 million. While $22,000 per liter of capacity sounds expensive (it is above average), that's the cost of doing business these days.

This is how flexible and single-use systems are adding value to biomanufacturing. Luckily for you, the trend is still in the early stages of taking the industry by storm.

Flex your muscles
Biotechnology pioneer Amgen has always been at the forefront of innovative new technologies. The company is continuously increasing its investment in biomanufacturing systems as its importance and breadth grows. By introducing single-use filters, tank liners, and even bioreactors, Amgen aims to reduce manufacturing costs, environmental waste, and the risk of contamination.

GE Healthcare Life Sciences is taking the idea one step further with Xcellerex. The disruptive acquisition is implementing single-use systems to revolutionize entire biomanufacturing facilities. Companies implementing flexible manufacturing practices can retool facilities on the fly to produce any number of products, introduce process improvements and automation, alter capacity to keep up with market demand, and reduce costs and contamination risks.

Repligen entered the flexible manufacturing conversation with the introduction of its OPUS Series chromatography columns, which offer a solution for the most important and costly manufacturing step. After running a fermentation, engineers must remove remnants of the manufacturing process such as dead cells, growth media, growth factors, and byproducts, while keeping as much of the desired biologic drug as possible. To do this, the liquid from a bioreactor is passed through a series of two or three chromatography columns lined with resin specifically designed to bind to the biologic drug (Repligen is the world's top producer of one such resin, Protein A). Impurities are washed out after each pass, while biologics are recovered from the resin and passed through the next column to ensure strict purity. The high cost of resin and specially designed columns have made chromatography the most difficult process step to innovate around. Repligen is changing that. OPUS columns are optimized to a customer's needs, shipped to the customer's facility, snapped into the process, and disposed of after one or several uses. The company introduced the product in 2012, but is already building prototype columns with up to 400% more capacity after customers demanded "more, more, more!" The larger columns could be launched in early 2014.

The OPUS Series represents just a single product line, but Repligen is committed to becoming the world's top bioprocess and biomanufacturing supply company. Continuing to add capacity at its own manufacturing sites, develop new flexible and single-use products, and enhancing current products after receiving customer feedback will go a long way to securing that goal. Investors have a beautiful opportunity to get in on the ground level of an amazing growth trend.

Foolish bottom line
There's still quite a long way to go before Repligen can become a serious competitor to Amgen and General Electric, but I believe the company is a much better investment for those looking to capitalize on the growing biotech industry and the manufacturing solutions desperately needed. There's no risk of clinical trial failures or generic competition as there is with Amgen, and no worries about dealing with a giant conglomerate as there is with General Electric. Check back after Repligen reports third-quarter earnings this Thursday when I'll dig through the financials of this biomanufacturing underdog.