Metals, coal, mining -- these industries are known for being cyclical. If you invest in these industries, you are probably well aware that companies within this space have boom and bust cycles. This week, Goldman Sachs upgraded its ratings on both AK Steel Holdings (NYSE:AKS) and U.S. Steel (NYSE:X) because a rebound in steel may very well be on its way. So should you heed the advice of Goldman and jump into these steel companies? Let's take a deeper look at both AK Steel and U.S. Steel and see whether they're worth your investment dollars or whether there may be better investments elsewhere.

Something has to give
America's steel industry -- just like the rest of the world -- waxes and wanes on the whims of the Chinese economy. In 2011, the country represented 46% of the world's steel supply and 44% of the world's demand. According to IHS Global Insight, Chinese steel demand will grow at a rate of 3%-4% between now and 2020. That's a major drop-off from the 11% growth between 2006 and 2020, but a growth of 4% over that time period would be equivalent to increasing U.S. demand over that same time frame by 255%.

The biggest question mark that hovers over much of the steel market for non-Chinese steel manufacturers is whether Chinese production of steel will slow down. According to Nucor (NYSE:NUE) CEO John Ferrolia, China has about 300 million tons of excess capacity that it has been unloading on foreign markets at prices well below market value. So as U.S., Chinese, and other major steel demand hubs pick up, there is still loads of excess capacity that will get in the way of domestic steel manufacturers.

Prices and demand in the U.S. are showing signs of life. Hot rolled steel coil prices -- a major market indicator -- are at their highest in more than a year, and demand from the automotive and energy industries here are taking off. That being said, another thing to consider for American steel manufacturers is that there is still a lot of excess capacity in the domestic market as well. The utilization rate for steel mills here at home is still well under 80%, which is leading manufacturers like U.S. Steel to shutter plants.

So there is promise that demand both in the U.S. and globally will pick up, but it will probably still be a pretty bumpy ride as companies such as Nucor, U.S. Steel, and AK Steel fight for market share.

Making an investment decision
The thing to remember when investing, though, is that you aren't just buying the macro trends. There's also the company itself you're buying. Over the past three years, U.S. Steel and AK Steel Holdings haven't exactly been shareholder-friendly, but then again its hard to be when you don't make a dollar over that period. 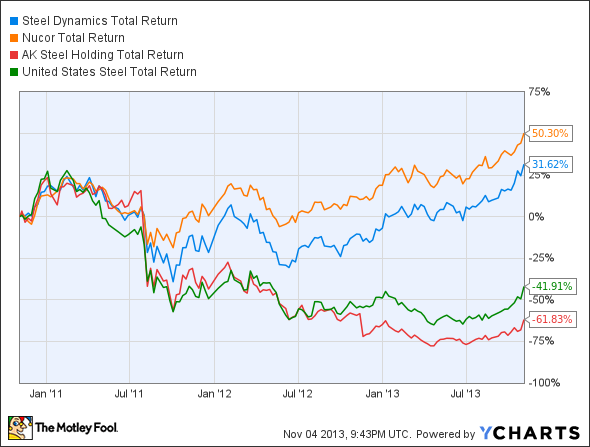 It isn't just coincidence that both Steel Dynamics and Nucor were able to generate a profit over these past three years while U.S. Steel and AK Steel didn't. These two groups of companies sit on two different sides of the steel industry. Both AK Steel and U.S. Steel's facilities use blast furnaces to create a majority of their steel from raw iron ore. In contrast, both Steel Dynamics and Nucor use electric arc furnaces to reproduce steel from scrap iron. Not only do these facilities have lower raw material costs, but electric arc furnaces can also run on natural gas like Nucor's new direct reduced iron plant in Louisiana. While AK and U.S. Steel do have some electric arc facilities, they aren't the primary manufacturing methods for these two companies.

Sure, the steel market looks like it will pick up, and every player will see some benefit. When you consider that both Nucor and Steel Dynamics have a distinct competitive advantage and much stronger financial positions to capture growth, though, it's much harder to see U.S. Steel and AK Steel capturing as much from an upswing in the steel market than their competitors.

What a Fool believes
Investing in commodities has a lot to do with the price and demand outlook for that commodity, but it isn't the only thing to consider. Be sure to look at the company that you plan to invest in as well, because its ability to turn a profit will have just as much of a say in your making a return as the price of the commodity itself. In the case of AK Steel and U.S. Steel, sure, they may see some gains from a turnaround in steel, and Goldman Sachs has some very valid points about the steel turnaround. As companies, though, they have much more ground to make up to become more profitable than Nucor or Steel Dynamics. I would much rather put my money in a market leader during a down market than one that's struggling.