Southern Company (NYSE:SO) reported Q3 earnings this week, disappointing investors with top and bottom line misses. While weather sucked sales down, the company's got a bigger problem on its hands -- a $5,240,000,000 problem, to be exact. Here's what you need to know.

Number crunching
Southern Company's sales clocked in at $5.0 billion for Q3, 0.6% below last year's Q3 and a full 6.8% below analyst estimates. On the bottom line, Southern's earnings also tapered off. Its $1.08-adjusted EPS clocked in $0.03 below analyst expectations, as well as Q3 2012's profit.

Looking back, here's how Southern Company's sales and earnings have fared over the past five years: 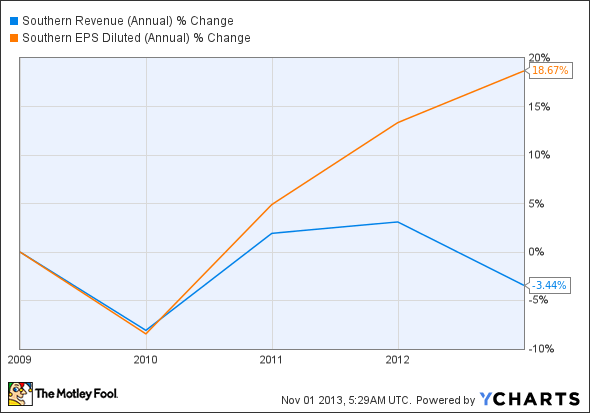 SO Revenue (Annual) data by YCharts

Southern's not the only utility to miss twice this quarter. TECO Energy (NYSE: TE) reported earnings on Halloween, and its doubly disappointing sales and earnings spooked some value out of shares throughout the day. But while TECO Energy's got some treats in store for long-term investors, Southern's position is slightly more tricky.

Beyond the numbers
When it rains, it pours. Chairman, CEO, and President Thomas Fanning blamed "consistently unseasonable weather," and CFO Art Beattie called it "milder than expected." But no matter what you call it, weather knocked an estimated $0.07 off this quarter's earnings.

Unfortunately for the utility, weather isn't the only worry in Kemper County.

Southern announced earlier this month that it no longer expects to fire up its new 582 MW "clean coal" gasification plant by May 2014. It now anticipates powering Kemper up some time in Q4 2014, and a new $243 million in costs puts the plant's total price tag at $5.24 billion. The Wall Street Journal calls it "possibly the most expensive fossil-fuel power plant ever built in the U.S."

And unfortunately for Southern, recently resigned Mississippi Public Service Commissioner Phil Bryant is no longer the decision-maker for any additional cost recovery requests. Long-time Chevron (NYSE:CVX) Executive Stephen Renfroe came out of retirement (and off a sailboat) in September to take the reins, and it's unclear whether Renfroe will be as amicable an ally.

The world of utilities has changed rapidly over the last few years, and Southern's attacked its reliance on dirty coal with a vengeance. Capex as a percentage of invested capital base has averaged a substantial 8% as the company plowed ahead with new natural gas plants, nuclear plants, clean coal plants, and environmental compliance spending.

But while Fanning expects expenditures to ease up in the next few years, overextended projects like Kemper have already caused the company considerable trouble. While Exelon (NYSE:EXC) has chosen to invest heavily in hedges to keep low power prices and cheap natural gas from killing its nuclear-centric portfolio, Southern is physically reshaping its fleet. Exelon's latest earnings report blew away expectations, and Exelon stock's 20% drop this year may finally be ready for a turnaround.

Southern talked a big talk for the next decade, but 2013 will simply not be its best year. Q4 estimates are set at $0.44 EPS, and the company expects its annual results to clock in at the bottom end of its guidance range.

Is Southern headed south?
Southern Company's stock is priced at a premium to competitors – and this latest report makes it look more expensive than ever. Weather put a damper on this quarter's report, but uncertainty at Kemper introduces new risk that ultimately outweighs any return. For long-term Southern Company shareholders, this quarter alone isn't reason enough to sell, but you won't see me stocking up on Southern stock any time soon.