The copper and gold miner needs to hit a home run but is now down on the count for this rich project.

For the second time, Taseko Mines (TGB 3.94%) has swung at and missed the pitch for its proposed New Prosperity mine in British Columbia. Behind on the count, it's looking as though connecting at the Canadian gold and copper project is more unlikely than seeing the Boston Red Sox winning a World Series at Fenway Park.

Of course, the baseball team managed to actually achieve that elusive goal this year for the first time since 1918, but Taseko doesn't appear able to even reach base with the mine, let alone hit the home run it needs. 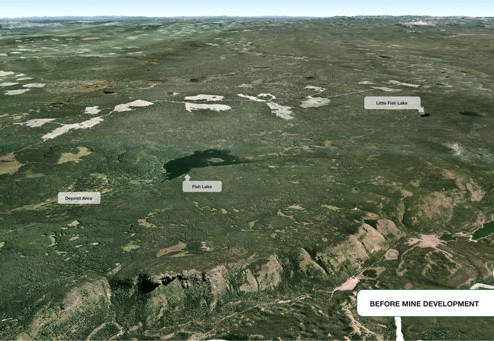 The Canadian Environmental Assessment Agency issued its report last week on the New Prosperity proposal and found it would create "several significant adverse environmental effects," including degrading the water quality at Fish Lake, impede on the cultural and religious usage of the land by aboriginal tribes, and endanger both aquatic life and the grizzly bear population.

Even with the remediation efforts Taseko developed after the government rejected its original proposal in 2010, the assessment agency concluded the miner would fall severely short of its promise. Among the findings was the belief that the miner underestimated the volume of seepage that would occur at the tailings pond it would create (completely obliterating an existing lake and surrounding areas through erection of walls as tall as 377 feet) while disturbing ancient burial and cremation sites of the Tsilhqot'in and Secwepemc aboriginal tribes.

Also irreparably disrupted would be the aquatic life in both lakes as well as surrounding streams. While the panel agreed with Taseko's assessment that its mitigation proposals for the impact the mine would have on the grizzly bear population if successfully implemented would leave them in better shape than they currently are, it thought the chances of actually achieving that result "challenging" at best.

The outcome sounds an awful lot like the recent decision that befell Anglo American (NASDAQOTH: AAUKY) at its massive Pebble copper project in Alaska that it owns with Northern Dynasty Minerals (NAK -0.44%). There the EPA said the project would wreak catastrophic damage on the headwaters of Bristol Bay, a major spawning ground that sees 40 million salmon swim through every year.

Despite estimates that Pebble could produce as much as 55 billion pounds of copper, 67 million ounces of gold, and 3.3 billion pounds of molybdenum during its nearly 80-year life, not to mention the jobs and revenues it would bring to the region, Anglo saw the writing on the wall regarding its chances of success and backed out of the project.

Like Anglo's partner Northern Dynasty, which vows to still moved forward, Taseko seems determined to dig in and challenge the findings. It contends that the review was "unfair."

Even Barrick Gold (GOLD -5.13%) realized it was time to call it quits after writing off billions of dollars related to its Pascua-Lama gold mine in Chile. It ran into a brick wall of opposition of environmental concerns raised by indigenous peoples, and the miner has thrown in the towel by "temporarily" suspending all work at the project.

It's understandable why Taseko doesn't want to give up on New Prosperity. The proposed open-pit mine -- the world's seventh-largest gold-copper deposit, and Canada's largest -- is a 1 billion-tonne measured and indicated resource containing 5.3 billion pounds of copper and 13.3 million ounces of gold that over its 20-year mine life would produce up to 70,000 tonnes of ore per day. It estimates that at gold going for $1,000 per ounce and copper at $3.15 per pound, the project has a pre-tax net present value of $3 billion Canadian and a 40% pre-tax internal rate of return.

But that requires the miner to connect with the pitch, and so far it's been thrown off balance by all the curveballs crossing the plate. It's looking more and more as if Taseko Mines is about to strike out.

Fool contributor Rich Duprey and The Motley Fool have no position in any of the stocks mentioned. We Fools don't all hold the same opinions, but we all believe that considering a diverse range of insights makes us better investors. The Motley Fool has a disclosure policy.