Earlier today, shares of Bridgepoint Education (NASDAQ:ZVO) fell by as much as 10% on news that Deutsche Bank downgraded the company's shares from Hold to Sell with a price target of $13. Based on the company's closing share price last Friday of $19.61, this represents estimated downside of 33.7%. The reason behind the large downgrade can be chalked up to one thing; expected price decreases in a challenging environment.

Hard times for higher education
You see, recently, companies like Strayer Education (NASDAQ:STRA), have had to forecast lower tuition fees in light of a challenging environment for for-profit schools. Strayer, for instance, said that it plans to cut tuition by 20% next year while cutting off 20% of its headcount. On top of these planned cuts, the company plans on shutting down 20 of its locations, which is expected to negatively impact 5% (or 2,300 students) of its student body. As a result of the company's negative outlook, shares declined by around 20% on the day of the announcement last week, despite significantly beating analyst expectations on an earning per share basis and coming roughly in line with expectations on their revenue.

Other companies too, like Apollo Group (NASDAQ:APOL), have had a difficult time lately as well. Even though shares of the company jumped around 24.5% following an earnings report that handily beat expectations, it came as the company forecasted 2013 revenue to come in at $3.7 billion, a decline of 14% from the $4.3 billion it reported last year. On top of this, the company believes that next year will see even more disappointments as revenue is likely to come in at between $2.95 billion and $3.05 billion, a decline of between 17.6% and 20.3%.

It's good to be the black sheep
Given all this information, it isn't too far-fetched to expect that the company see some sort of decline in estimated value. However, is such a significant writedown in the company's estimated value warranted? To assess this, I determined that it would probably be best to look at two important variables; revenue growth and net profit margin. 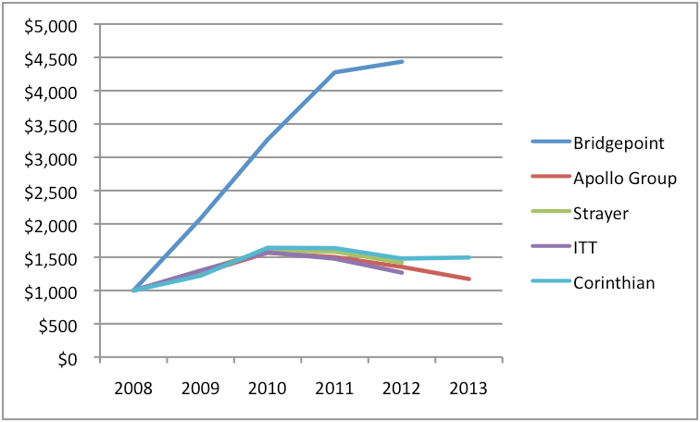 Based on the graph above, which measures the revenue growth of Bridgepoint, Apollo, Strayer, ITT Educational Services (OTC:ESINQ), and Corinthian Colleges (NASDAQ: COCO), we see something very interesting. For starters, by setting the base at $1,000, we can see how much each company has grown its revenue over time. In the case of both Apollo and Corinthian, I included their 2013 fiscal year results for the sake of forecasting their trend and the possible trend of their peers that haven't reported yet.

According to the graph, each company in the industry has seen its revenue decline by some degree over the past few years. This is primarily attributable to lower student enrollments and increased government regulation aimed at curtailing the for-profit sector for fear that it exploits uninformed students by charging high tuition and offering poor job prospects. However, two companies really stand out here. The first is Corinthian, which has seen its revenue decline moderately and, by 2013, even out as it has been able to adapt surprisingly well to changes in society's attitude toward the services for-profit education offers.

The second, and most interesting, outlier here is Bridgepoint. In addition to significantly outperforming its peer group with cumulative revenue growth of 343.5% from 2008 through 2012, whereas the average for its peers was about 38%, it also is the only company that can boast that its revenue has increased every year. Obviously, this is a big positive for shareholders and management alike, as it demonstrates that the company has been able to create some value for its stakeholders, especially when placed next to its peers.

Profitability is key!
Although revenue growth is nice to see, it's far from the most important factor for any company. Sure, revenue may be growing far faster than what its peers have been capable of growing theirs at, but it doesn't mean a thing if it comes at the cost of lower margins. In an effort to determine whether this is the case for Bridgepoint, I decided to compare the net profit margin of it over time to the net profit margins of its four peers.

Foolish takeaway
Based on the data presented above, it's fairly easy to claim that Bridgepoint has been one of the best growth prospects in the industry. Whether this remains to be true is difficult to tell, but my best guess is that, while times may get harder for each of these companies over the next few years, it's likely that Bridgepoint will continue to be outpace the competition if it doesn't make too many mistakes.