Seadrill Partners (OTC:SDLP.F) is a limited liability company and a subsidiary of Seadrill Limited (NYSE:SDRL). The company owns, operates, and acquires offshore drilling rigs. Seadrill Partners has long-term contracts with some of the major oil companies like Chevron, Total, BP, and ExxonMobil.

As of the second quarter of 2013, the company had an interest in five rigs: two semi-submersible rigs, two tender rigs, and a drillship. These rigs have an average remaining contract term of 3.8 years and a contract backlog (the total value of contracts to be executed) of $2.5 billion. Seadrill Partners also has the right to acquire rigs from Seadrill Limited, all of which have a contract term of five years or more.

A very important move by Seadrill Partners is the recent announcement of the acquisition of T-16 from Seadrill. The acquisition is likely to boost the company's revenue, EBITDA, operating cash flow, and net income. The numbers behind the growth coming from T-16 are as follows:T-16 has commenced its operations in September 2013 under a contract term of five years.

Considering Chevron's current $115,500/day rate for using T-16 and 100% efficiency of the tender rig, revenue for Seadrill partners will increase by (115500 x 365) $42,157,500 annually. Even a conservative 95% efficiency will contribute $40,049,625 annually, or approximately more than $10 million quarterly as 100% efficiency for a tender rig is not feasible since annual repairs and maintenance on the rig decreases its efficiency. This will increase the revenue for Seadrill Partners by 6.2% over the second quarter of 2013. 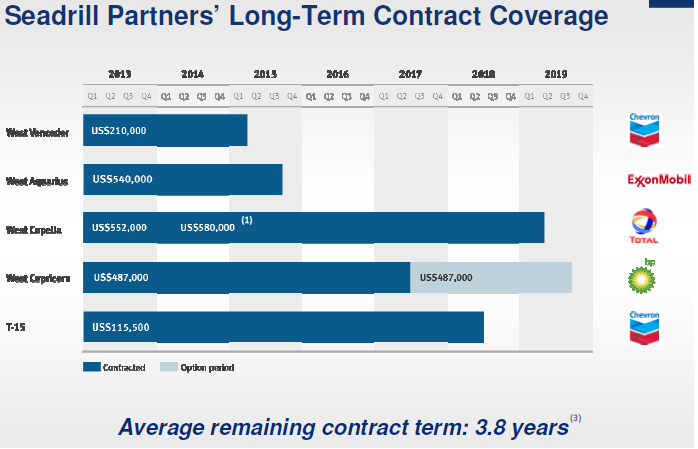 Apart from facts mentioned above, the Seadrill's financial standing also look promising. For fiscal 2012, revenue has increased by 24% from 2011. Net income has also increased by 33% over the last fiscal year. The company has a very strong balance sheet, with a debt of $70 million and a cash position of $50 million as of the second quarter of 2013.

The company's low level of debt gives it the financial flexibility to raise debt for future growth. Valuation looks attractive, with Seadrill Partners trading at an EV/EBITDA of 6.90 compared to Triangle Petroleum Corporation's 30.2 and Memorial Production Partners' 15.0. In addition to this, the company's dividend yield is 5.2% which makes it an attractive investment.

Ocean Rig UDW (NASDAQ:ORIG) is another offshore drilling company to consider for investment. Ocean Rig owns and operates 10 offshore ultra-deepwater drilling units, of which two are semisubmersible and eight are drillships. Out of these 10, three units will be delivered in 2013 and one in 2015.

Order backlog is a key indicator for any drilling company. As of the second quarter of 2013, the company has a high order backlog of $5.9 billion with an average contracted period of 2.9 years. The contracts, with giants like Eni Spa and Total, assure cash flow.

For any drilling company, the returns on the capital expenditure can only be expected over a long term of five to eight years. The data shows the distribution of the company's investments over the years. Significant capital raising and investment in 2013 and beyond are likely to translate into future growth. 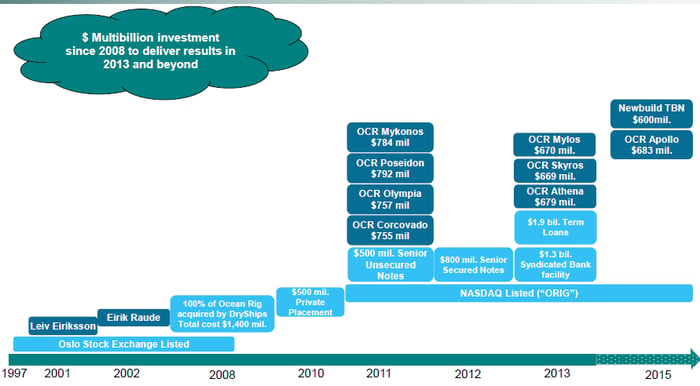 The company suffered huge losses in fiscal 2012, but its second quarter 2013 result swung with profits. Net profit increased from negative $2.8 million in the second quarter of 2012 to a positive of $38.8 million. The company has also been able to control its expenses by bringing its direct rig operating expenses down to $117 million, a drop from $145 million in the prior quarter.

Improvement in 2013's financials paves the path for better growth in the near term. Undervaluation is another factor to consider this stock. A PEG of 0.1, based on the analyst estimates of 262% earnings growth for fiscal 2014 and forward 1 year P/E of 30.6, makes Ocean Rig an attractive investment opportunity.

Knot Offshore Partners (NYSE:KNOP) was listed in April 2013 and is a limited partnership company which owns, operates, and acquires shuttle tankers on long-term contracts of over five years. Though Knot Offshore is new in the market, its parent company Knutsen NYK has been operating for over 100 years.

As of the second quarter of 2013, the company had four operating tankers contracted to leading oil and gas companies like BG Group, Statoil, and Transperto; it also has five potential dropdown tankers. The current four vessels have an average contract life of 7.2 years, allowing them to generate stable cash flows in the future. The minimum future revenue from each contract is $326 million, which would also ensure a healthy dividend of 6%.

An agreement with Knutsen NYK Offshore Tankers AS gives the company the right to purchase shuttle tankers with a contract life of five years or more. It would also give Knot Offshore an opportunity to grow by acquisition. 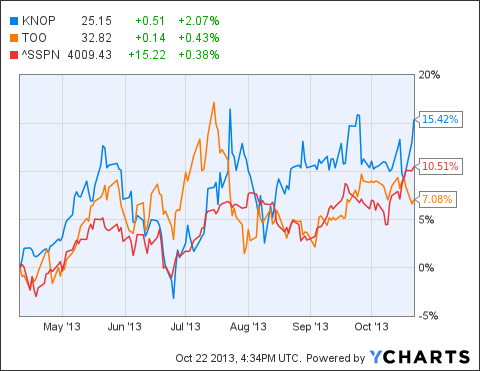 Conclusion
A gradual recovery and growth in the global economy will translate to incremental demand for crude and higher oil prices. This will in turn encourage robust drilling activity, particularly offshore drilling. This is because onshore oil discoveries have been minimal in the recent past, while offshore oil discoveries have been robust. Keeping these factors in mind, the above companies can be considered as medium to long-term investment options.

In the mood for dividends outside of the energy sector?