In the process, net profit for the oil and gas junior shot up a fantastic 185% from last year's third quarter. The market duly rewarded the company by pushing its share price up by almost 15% yesterday. More importantly, Swift Energy seems to be following the footsteps of EOG Resources (NYSE:EOG) by exploiting the oil-rich window in the Eagle Ford shale play.

Third quarter revenue, at $153 million, increased a healthy 19% from last year's third quarter. Without a doubt, increased commodity prices played a part in the topline growth. Swift Energy realized an aggregate average price of $50.72, up from $44.51 in the year-ago quarter, per barrel of oil equivalent or Boe. Average natural gas prices rose a sizable 25%, while crude oil prices went up by about 5%.

However, delving deeper, we notice that it's the clever change in production mix that played the pivotal role in the company's revenue growth.

Market conditions didn't dictate growth
Rather than the generous increase in natural gas prices, it was growing crude oil sales volumes that made the biggest difference. The following waterfall chart breaks down the various components of revenue growth from last year's third quarter:

Crude oil production grew a substantial 15% to 1 million barrels, from 870,000 barrels in the year ago quarter. Similarly, natural gas liquids grew 17% to 600,000 barrels. On the other hand, Swift reduced its natural gas production by 3% over the same period. On an energy equivalent basis, Swift still managed to increase total production by 6% to 3.06 million barrels of oil equivalent, or MMBoe. Additionally, the percentage of liquids production, at 52.5%, overtook that of natural gas. From an investor's perspective, this is exactly the kind of growth that I'm looking for. Management seems to be in full control, rather than letting market conditions take the driver's seat.

Strategically, the move to produce more oil while cutting down on natural gas is nothing short of excellent. Devon Energy (NYSE:DVN) made a similar shift; so has Chesapeake Energy (OTC:CHKA.Q). Devon Energy increased liquids production in the second quarter, which grew from 36.8% to 43% of total production in a period of twelve months. As a result, the Oklahoma-based company's upstream sales grew by 38% in the second quarter from last year.

Chesapeake Energy reduced its natural gas proportion from 80.4% of total production to 75.7% in the first half of 2013. Not surprisingly, total sales grew 21% to $3.8 billion. When Chesapeake and Devon report their third quarter results tomorrow, I'm expecting a further increase in liquids in the production mix, and that should definitely drive their top line growth. Even a slight alteration in the production mix, with increased liquids production, would reap huge dividends.

The Eagle Ford continues to impress
Swift Energy's investment in its Eagle Ford acreage, where it has deployed more than 80% of its capital, is paying off. In the third quarter, Swift completed nine operated wells, with seven of them producing greater than a thousand barrels of oil equivalent per day. Since 2010, proved reserves in the Eagle Ford grew 300% to over 120 million barrels by the end of 2012. 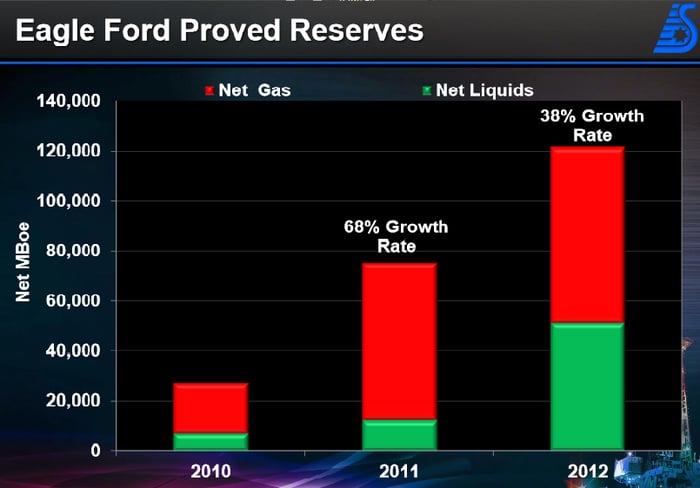 In comparison, investors only need to take a look at EOG Resources to recall the phenomenal growth afforded by the Eagle Ford shale play. Fellow Fool David Smith compares this company to a finely tuned machine, as crude oil production grew by 35% year over year. Likewise, Swift's acreage is in the sweet spot of the Eagle Ford, with initial production rates climbing 15% for newly drilled wells when compared to last year.

Another important reason
Management also credits increased efficiency as a major factor driving its margins. The company is putting more focus on increasing productivity per well. This is a highly appreciated move, as it keeps a check on spending: instead of increasing productivity by drilling more wells, Swift is looking to squeeze out the last possible drop from its existing wells. The company has increased the number of frac-stages, with longer lateral length per well. This should definitely serve the company well in an expensive, unconventional exploration and production market. A look at the following slide from the company's corporate presentation put things in perspective: 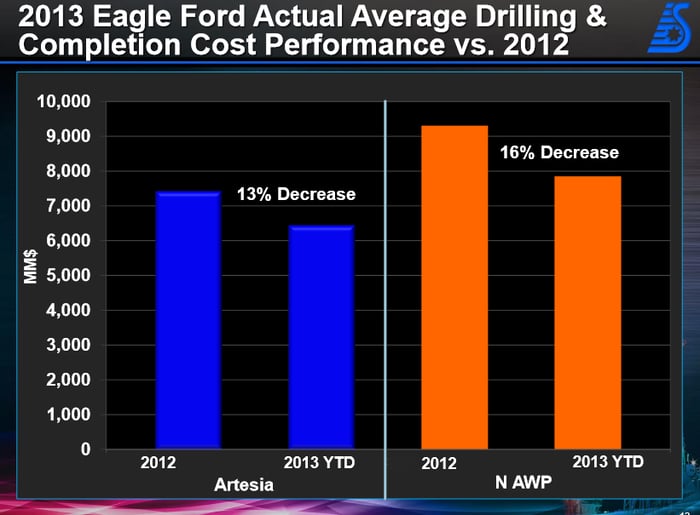 Final thoughts: Swift's growth is no fluke
By attacking the Eagle Ford acreage, Swift Energy should be able to afford more predictable results going forward. And in my view, this company is going to fire on all cylinders from an operational perspective. On the balance sheet, there is a $1.2 billion debt, with debt to equity at 104% -- which isn't really enviable. At the same time, I'm not too worried, since the company is still in its growth stage, with a current market capitalization of only $640 million. Energy investors should be closely watching this stock.