Swift Energy's(NYSE:SBOW) stock has cratered since the start of the year, dropping nearly 23% even as the broader market is roughly flat. A rough first quarter that saw the Houston-based company's oil wells underperform expectations is the main cause of the decline. But the company can reverse its recent decline by accomplishing the following three objectives.

Swift Energy is in the middle of a strategic repositioning. The Gulf Coast-focused company has assets in Texas and Louisiana, as the following slide shows. 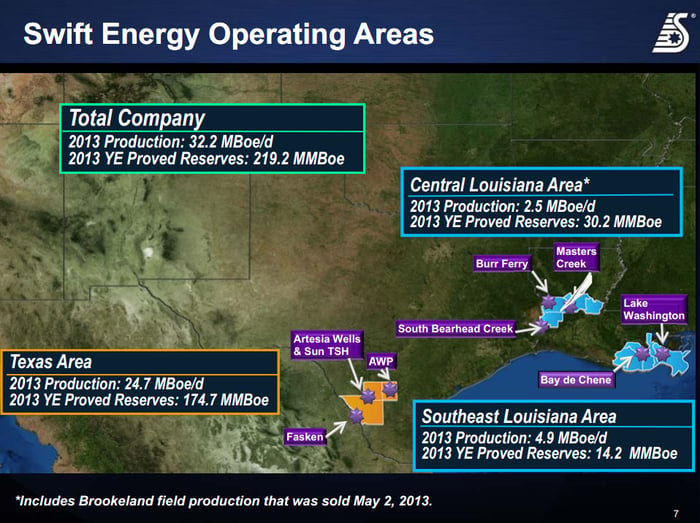 However, Swift Energy is looking to divest its central Louisiana assets, and to find a joint venture partner for its Fasken natural gas assets in the Eagle Ford shale. The company is negotiating with potential partners and anticipates concluding both transactions by the end of the second quarter. Needless to say, the first step in rebuilding investor confidence is to complete both deals; getting highly favorable terms would also help greatly. Until then, investors face too many unknowns to come back, as both deals are critical to reducing the company's leverage so that it can prudently fund growth.

Improve operations
Swift Energy's plan in 2013 was to increase initial production rates and the estimated ultimate recoveries of its wells in south Texas by 10% each. The company also wanted to reduce drilling and completion costs in that area by 10% as part of its 10-10-10 plan.

The good news is that the Fasken gas assets vastly outperformed the plan: initial production was up 62%, while the estimated ultimate recovery from the wells surged 85%. Unfortunately, both the company's AWP oil and Artesia oil and condensate wells underperformed the estimated ultimate recovery. That impacts Swift's the long-term returns as these liquids-rich areas had the potential to be high-margin growth assets.

One reason for the poor performance is imperfect placement of wells at times, according to the company. If it can consistently land its wells in the sweet spot of the shale these numbers should improve, as the following slide shows: 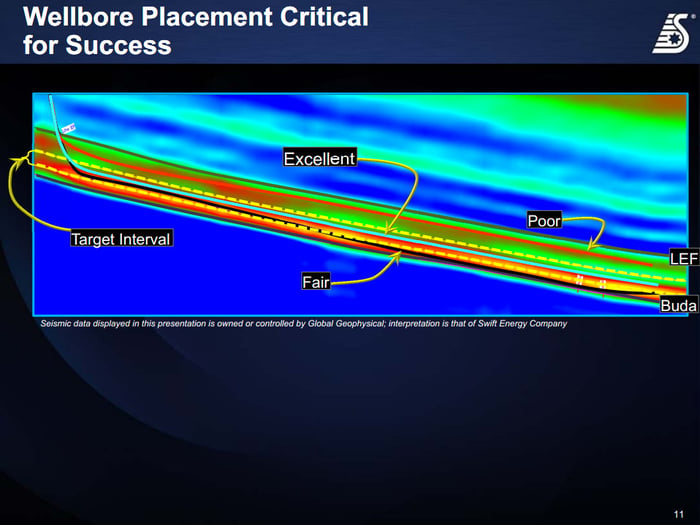 Hitting the sweet spot more consistently should enable Swift Energy to get more oil out of its wells. Improving its oil production would go a long way to winning back investors enticed by the oil potential of the Eagle Ford shale. A sole focus on oil is one reason why the stock of Penn Virginia (NYSE: PVA), for example, is up more than 72% this year. Penn expects to grow its oil production 66%-78% this year, while Swift Energy anticipates overall production to be basically flat. In a world where investors desire high-margin growth, Penn Virginia emerges as the clear favorite.

Begin to manufacture returns
Swift Energy has ratcheted down its capital spending over the past few years. In 2012, the company spent more than $700 million on development and prospecting for new oil and gas projects. This year the company expects capital spending to fall by nearly 50% from that high, as the following slide shows. 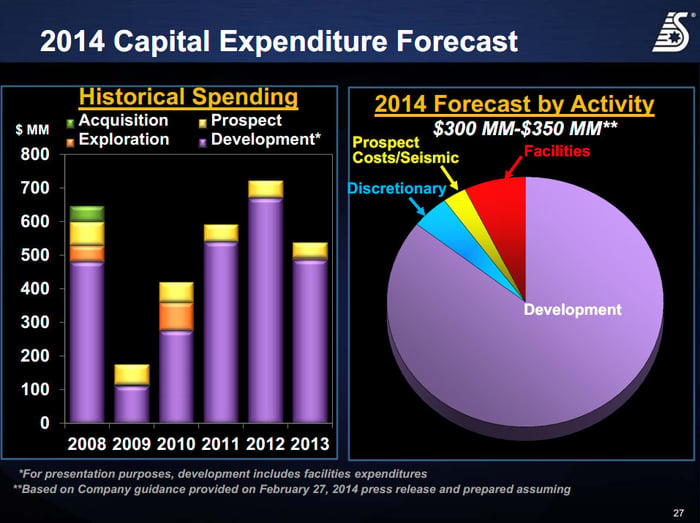 The company needs to reach the point where liquidity isn't an issue so that cash flow can fund the manufacturing of returns in the Eagle Ford. The sale of its central Louisiana properties, as well as the sealing of a joint venture at its Fasken gas properties, would help ease any near-term liquidity concerns. Beyond that, Swift's focus on drilling better wells for less capital will improve capital efficiency, enabling it to stretch its capital dollars. That combination is necessary for the company to manufacture returns for investors instead of spending money exploring its acreage.

Investor takeaway
Swift Energy still needs to grow production in the future to win back investors. The company must find the right balance between capital spending and maintaining liquidity in order to achieve higher-margin production growth that will fuel returns. Until that happens, it is companies such as Penn Virginia that will win favor with investors.

This is a much better growth stock to buy