After losing most of their value in the last two years, J.C. Penney (OTC:JCPN.Q) shares bottomed out at just $6.24 a few weeks ago. Since then, a number of investors and analysts have begun to speculate about whether the troubled department store operator could be a good turnaround candidate. J.C. Penney shares have now rebounded by more than 35% since mid-October. 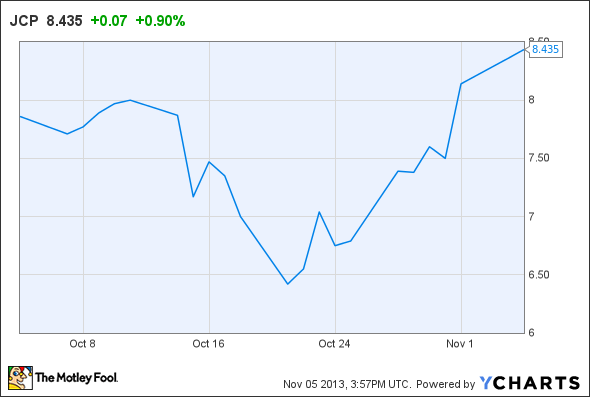 It's certainly possible that J.C. Penney could engineer a turnaround. However, the company is so far from the breakeven line at this point that I think it is likely to wind up in bankruptcy court sooner or later. There are plenty of good investment opportunities available in the retail sector (and elsewhere), so there's no good reason to accept this risk by investing in J.C. Penney.

Sales turning positive?
J.C. Penney CEO Myron Ullman has been eager to convince investors and the world at large that his company is on the mend. Last week, Ullman stated at a conference that J.C. Penney's same-store sales would begin to grow again by the end of the third quarter (which ended last Saturday). That was the third time in a span of five weeks that Ullman had made a forecast along those lines.

Since Ullman affirmed the forecast near the end of the quarter, it seems safe to assume that J.C. Penney has hit that goal. However, sales were down dramatically in the first half of the third quarter, so investors shouldn't expect sales growth for the full quarter. ITG analyst John Tomlinson -- who is relatively bullish about Penney's prospects -- expects same-store sales to be down 4% for the quarter. That's roughly in line with the average analyst estimate for a 4.3% sales decline.

Analysts do expect J.C. Penney to return to sales growth in the fourth quarter. That would be particularly impressive because Q4 had an extra week last year. However, even with this return to growth, all of the analysts tracked by Yahoo! Finance expect the company to lose money in what is traditionally the most profitable part of the year for retailers.

Steep hill to climb
That's the crux of the problem for J.C. Penney: It lost more than $1 billion in the first half of 2013 (even excluding restructuring charges), and it is expected to lose a significant amount of money in the second half of the year as well.

Given the rate at which J.C. Penney has been burning cash, nothing short of rapid improvement will keep the company solvent for the next several years. Even a return to sales growth won't help very much if it's driven by big discounts that eat into gross margin.

CFO Ken Hannah has stated that the company plans to get back to its historical gross margin rate of 37%. However, it is nowhere close to that target; gross margin was just 30% in the first half of 2013. Big sales events might drive traffic and sales, but they will continue to weigh on gross margin, keeping J.C. Penney well short of the breakeven line for the foreseeable future.

A long shot
Even if J.C. Penney returns to sales growth immediately, it will need to grow revenue by 20% to 30% from today's levels while also boosting gross margin to its 37% target just to break even. That may be theoretically achievable in the long run, but it doesn't have that much time on its hands.

For a J.C. Penney turnaround to pay off for long-term investors, the company will need to grow sales quite rapidly (perhaps 10% annually) for the next few years without discounting too deeply. The odds of this scenario playing out don't seem very good at all.

Why I'm Not Betting on a J.C. Penney Turnaround @themotleyfool #stocks $JCPN.Q Next Article
Current