The market has sent shares of Renewable Energy Group (NASDAQ:REGI), the nation's largest biodiesel producer, south in the last two months leading up to third quarter earnings. It is true that the biodiesel industry is largely dependent on blending and tax credits for profitability and its near term prospects are jostled around each year when annual targets are set by the Environmental Protection Agency. However, blending requirements have been reliably raised each year and Renewable Energy Group continues to increase its operating flexibility and efficiency. The company got the last laugh on Tuesday afternoon as it reminded investors that worrying over short term noise should take a backseat to its long term progress. 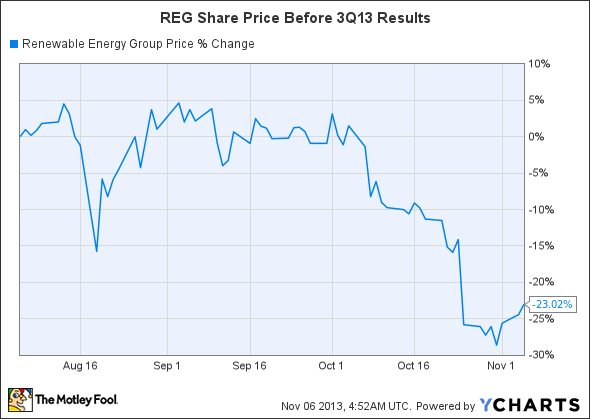 REG absolutely smoked the third quarter of 2013 as new production capacity was added, facility upgrades came online, and logistical efficiencies made their presence known. Just how great was the quarter? And can the company continue to grow in the face of major competition from Darling International (NYSE:DAR) and Valero (NYSE:VLO)? Let's dig in.

Financials
Investors can view the press release for full financial results, but here are the numbers I would focus on:

You can see how the progress compares to the headway made in the second quarter, although I think it's quite evident that REG is in the middle of a growth spurt. The company brought new production capacity online just in time to take advantage of higher average selling prices. In fact, the company drew down a record amount of inventory to keep up with customer demand and fully capitalize on healthy market prices.

To put the company's growth in perspective, consider that quarterly revenue represented 45% of total sales from last year, 56% of total sales in 2011, and more than total sales from 2008-2010 combined. That's scary. It could get scarier, however. The biodiesel leader's growing war chest will allow it to continue to seize future growth opportunities and build-out its storage and distribution capacity without diluting shareholders. Buckle up, folks; we're nowhere near the end of this growth story.

Key developments
Most of the progress came from a growing manufacturing base. REG's 30 million gallon per year (mmgy) biorefinery at Albert Lea enjoyed its first full quarter of operations after receiving an upgrade allowing multiple feedstock use. Meanwhile, New Boston continued ramping toward its nameplate capacity of 15 mmgy, while the company flipped the switch on for the recently acquired Mason City biorefinery -- good for an additional 30 mmgy. In all, the three facilities represent 29% of the company's currently operable capacity.

This industry is big enough for the both of us, Darling
REG hasn't been the only company efficiently producing biodiesel and gobbling up new assets. Darling International has gone on an enormous acquisition spree this year with a $2.2 billion purchase of Vion Foods and $613 million purchase of Maple Leaf Foods. The company doesn't operate solely in biodiesel production, instead focusing on upstream collection and processing of used oils and animal by-products into higher value goods such as protein, hides, fats, tallow, yellow grease, and the like.

Of course, producing the feedstock needed for biodiesel production makes the leap to fuels a no-brainer. And that's exactly what Darling has done with partner Valero in the Diamond Green Diesel joint venture. The pair recently brought online a biorefinery that sports a nameplate capacity of 137 mmgy. Investors may be wondering if a facility that large represents a threat to operations or expansion at REG, especially considering that it represents 53% of REG's total operable capacity.

While Darling and Valero got a shout-out in the competition section of REG's annual report -- the joint venture will consume 11% of the nation's used cooking oils and animal fats -- the biodiesel industry is large enough for both businesses to operate comfortably. Consider that the amount of biodiesel required to be blended into the nation's transportation fuels increased by 280 million gallons from 2012 to 2013. The industry typically witnesses increases of 200 million gallons each year -- and there are no signs of a pullback anytime soon. REG and Diamond aren't the only companies adding new capacity, but I simply don't see a cause for concern.

Outlook
Management provided a similarly rosy outlook for fourth quarter production. The company's biorefineries and inventory are expected to combine for 65 million to 75 million gallons of product sales, resulting in adjusted EBITDA between $25 million to $40 million. That would be a very solid end of the year, but keep in mind that volume obligations for the next marketing year are due to be released before the end of the year. The uncertainty and delay could spook shares of biodiesel producers such as REG, although I'm expecting blending requirements to increase from 1.28 billion gallons now to somewhere around 1.5 billion gallons next year. Stay tuned for an official announcement.

Foolish bottom line
Although the market started to second guess REG's valuation in the last two months leading up to third quarter earnings, I don't see any reason to doubt the management team or growth plans currently in place. If nothing else makes you a believer, consider that the company's net book value increased 32% since the second quarter and 70% since the end of last year. Shares may have rallied quite a bit since then, but net book value at the end of September equates to $16.23 per diluted share. I think that answers any questions related to the worthiness of an investment at current prices.