Please ensure Javascript is enabled for purposes of website accessibility
Log In Help Join The Motley Fool
Free Article Join Over 1 Million Premium Members And Get More In-Depth Stock Guidance and Research
By Dan Newman - Nov 7, 2013 at 11:30AM

What's happened in the bitcoins market as of late?

How about putting your money into a currency that:

It doesn't sound enticing. But that same currency is up over 80% in value over the past month, and up over 2,300% over the past year: 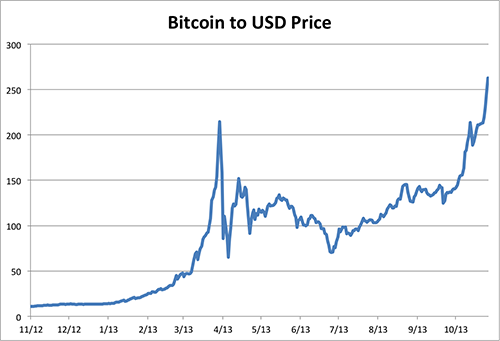 What's happened recently to fuel such a rally? Besides seemingly new interest from Chinese bitcoin exchanges, there are a few other developments.

Senate inquiry
It's impossible to tell how the bitcoin market will react to any news, but it appears that any step that could legitimize it fuels price run-ups. The latest comes from news that the Committee on Homeland Security and Government Affairs as well as the Banking Committee will hold hearings on digital currencies and their effects on illegal trade and taxation. Notice from such high-level institutions shows Bitcoin's growing clout. But the government could decide to demonize digital currencies for their relation to illegal drug marketplaces, and forbid citizens from trading in the trending digital tender.

Silk Road shutdown
In October the FBI, DEA, and IRS took down the Silk Road, one such online marketplace that dealt in drugs, guns, and hitmen for hire. The government seized about 170,000 bitcoins related to the market, which at the time was worth $33 million and now is valued at $43 million. The shutdown of one of the most well-known black markets caused a slight downward blip in price. But the currency quickly regained the lost value. It's possible that such a shutdown of the seedier aspects of the bitcoin market lends it more legitimacy. And as the story became popular, more were exposed to bitcoins' existence.

Corporate interest
Besides many start-ups looking to supply the bitcoin industry, eBay (EBAY 0.82%) CEO John Donahoe recently reiterated past statements that it was "watching" Bitcoin. In the future, eBay's PayPal division plans to allow retailers to store loyalty points in a user's PayPal wallet-and adding digital currencies to the mix isn't beyond reason. Additionally, the number of PayPal accounts, transactions, and payment volume have had double digit growth rates every quarter compared to the prior year going back to at least nine quarters. If eBay made moves to utilize bitcoins, it would open up the market to its 123 million total active registered accounts.

Even if it doesn't incorporate bitcoins, it's smart for eBay to keep an eye on them as it must continue to own the digital payment space, and bitcoins could be an outside disrupter with its zero to low processing fees for transactions.

Digital value
Even with these bits of news, the risks of bitcoin remain the same as they were when it was worth $10. If you don't understand how to secure data files and you don't regularly backup your data, chances are bitcoins aren't for you -- just as if you can't understand how a business makes it money, you probably shouldn't invest.

3 (Related) Reasons Merging HBO Max and Discovery+ Is a Mistake