Shares of resurgent telecom player T-Mobile (NASDAQ:TMUS) have been on a tear lately, having appreciated around 60% over the last six months alone and easily besting telecom rivals like AT&T and Verizon. 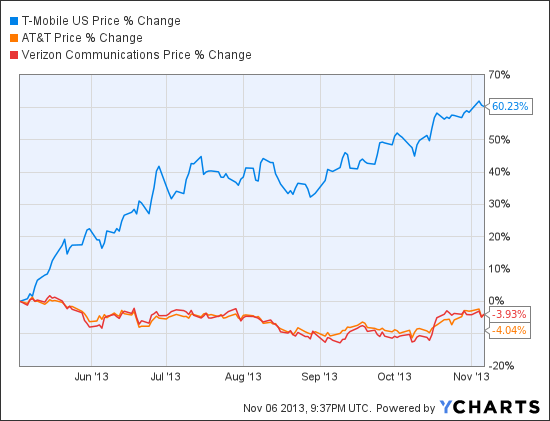 After languishing for some time in the wake of the Justice Department's vetoing of majority-owner Deustche Telekom's sale of T-Mobile to AT&T in 2011, T-Mobile has once again attracted the interest of investors through a number of bold moves aimed at reinvigorating subscriber growth.

In that vein, T-Mobile put its money where its mouth is this week by posting an impressive beat in its third-quarter earnings announcement. For the quarter, it added more than 1 million new subscribers, although a portion of those new subs came from the recently acquired Metro PCS.

T-Mobile likely owes this strong subscriber growth in no small part to Apple's (NASDAQ:AAPL) new iPhones. T-Mobile prices iPhones more aggressively than many of its U.S. competitors, offering the 5s for $99 with a contract and 5c for $0 with a contract, each meaningfully lower than T-Mobile's rivals.

In the video below, tech and telecom analyst Andrew Tonner looks at T-Mobile's recent successes and Apple's contribution to these wins.