The Dow Jones Industrial Average (DJINDICES:^DJI) has fallen a slight 0.17% late in trading today, driven lower by Federal Reserve officials opening the door to "tapering" as soon as next month. The easy money has been viewed as a market driver for months, but eventually it will need to be shut off -- and no one knows what will happen when it is.

What's being lost in all this talk of tapering is that the International Energy Agency has predicted that the U.S. will be the biggest producer of oil by 2016, passing Saudi Arabia. This has broad implications for everything from economic growth to trade relations around the world. In the long term, this should help push U.S. markets higher and may be a bigger buy sign than whatever the Fed is up to.

Not only is the U.S. becoming the biggest producer of oil in the world, but it's using less oil along the way. You can see below that while production is up 39.5% over the past decade, consumption is down about 7%. If these trends continue, as the IEA predicts, we could be oil-independent by 2020. 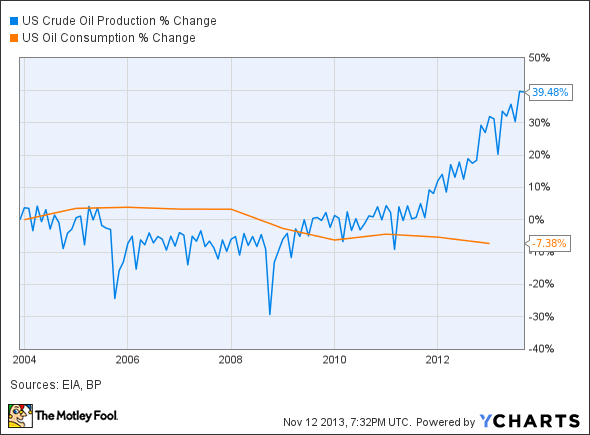 This has a big impact on companies drilling for oil as well as the U.S. economy.

The companies driving the charge
What's interesting is that it's not big oil that's leading the U.S. oil boom; they've become focused on large plays internationally and offshore. However, smaller companies are investing big in the domestic oil boom.

You can see below the revenue growth of three such companies: Continental Resources (NYSE:CLR), Kodiak Oil & Gas (NYSE: KOG), and Pioneer Natural Resources (NYSE:PXD). In the last quarter, they increased production by 38%, 123%, and 15%, respectively. 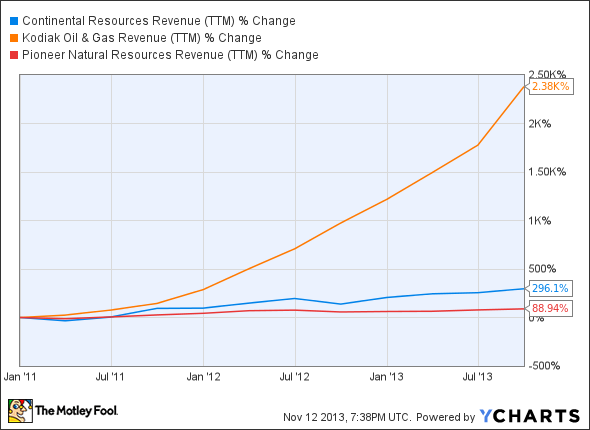 These three companies are just a snapshot of the industry, but they show the incredible growth in shale oil production in the U.S. That's what's driving the country toward the No. 1 spot in oil production.

Foolish bottom line
Energy stocks may be down today, but they'll actually drive a long-term change in the U.S. Fewer dollars will head overseas to buy oil, and more domestic jobs will be created, which should help drive economic growth -- and that growth will help drive the Dow Jones Industrial Average higher over time.

Sometimes the bigger story gets lost in the short-term noise of the market. I think today's biggest story on the market is the fact that the U.S. is moving closer to energy independence, which is good for U.S. stocks as a whole, even if the market doesn't see it today.

Could the U.S. Be the No. 1 Oil Producer? @themotleyfool #stocks $^DJI $CLR $PXD Next Article
Current