Earnings, earnings, earnings! That's all Mr. Market seems to care about during this time of the year -- and for good reason. When a company misses its earnings estimates on the downside, its shares usually fall (unless you are Chipotle Mexican Grill, which rose more than 15% after it failed to meet expectations), while an earnings beat can send a company's shares sky-high. As such, it is logical for the Foolish investor to be mindful of earnings estimates and a company's actual results.

High expectations for Macy's
Of particular interest in my mind is the upcoming earnings release of Macy's (NYSE:M), the $17.7 billion retailer with 2012 sales of nearly $27.7 billion. For the company's third quarter, for which it is reporting before the market opens on Nov.13, Mr. Market is expecting it to post earnings per share of $0.39 on revenue of $6.2 billion. This would mark an 8.3% increase from the company's earnings per share of $0.36 reported in the same quarter a year ago. Additionally, it would imply an increase in revenue of nearly 2.1% from the $6.08 it earned in the same period last year.

Assuming that the company is successful in achieving its expectations for the quarter, and also assuming that neither analysts nor Macy's management itself changes their fourth-quarter forecast, it would signify that Macy's will be on track to earn the $3.78 per share that Mr. Market expects for this fiscal year. Such an achievement would mean that the company has seen its earnings per share for the year increase by 9.2% from the $3.46 it earned last year, while seeing revenue increase, in aggregate, by about 0.9% to $27.95 billion.

Macy's crushes its peers... kinda
In comparison, strong peers Kohl's (NYSE:KSS) and Nordstrom (NYSE:JWN) have chalked up net profit margins of, on average, 5.8% and 5.9%, respectively, over the past four years. Initially, investing in shares of Macy's when its peers have outperformed it may appear to be a big pitfall, but the following graph might make you think about the situation a bit differently: 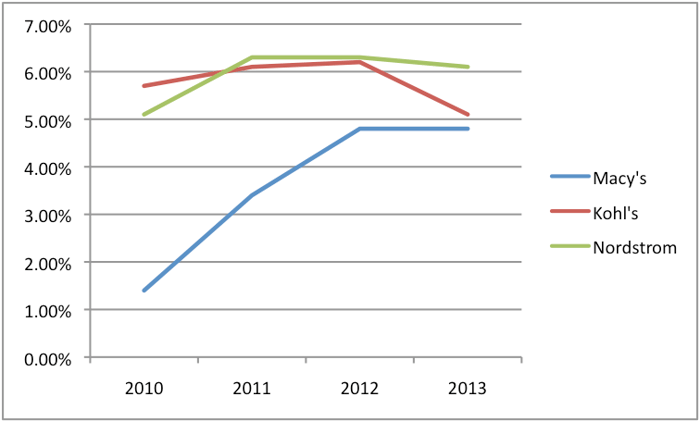 Looking at the graph, we can make out how each of the companies performed in regard to their net profit margins over the past four years. While Kohl's saw a moderate increase through its 2012 fiscal year, its profitability has fallen, primarily as a result of an increase in its cost of goods sold (COGS) as a percentage of sales, which has risen from 61.8% in 2012 to 63.7% in 2013.

Over the same time horizon, the situation for Nordstrom appears remarkably similar, but its decline in 2013 was less dramatic due to its ability to control costs better than Kohl's. Perhaps the most interesting, though, is Macy's, which saw its net profit margin increase from a four-year low of 1.4% in 2010 to a high of 4.82% in 2013. This shows that, while Macy's competitors have had negative performance over the past year when pitted against the prior year, Macy's was able to maintain its margins. This, combined with what the company expects for this quarter and the year as a whole, should be promising for the Foolish investor. However, it also means that management has a lot to live up to if it doesn't want to let its investors down.

Foolish takeaway
As we have seen, Macy's has been doing really well lately in terms of increasing its profitability. However, there is always the possibility that, when things go right, analysts become overly enthusiastic about a company's prospects. While this could signify that the company in question may continue to outperform how it has done in the past, the Foolish investor should remain cautiously optimistic so as not to get too carried away with what the market thinks will happen. Rather, they should consider if the company, at its current price, is still a buy if it fails to meet analyst expectations by a reasonable margin of safety. If so, then you don't need to worry much about earnings.