In a previous article, I discussed Johnson & Johnson's (NYSE:JNJ) upcoming sale of its fading diagnostics division, which could net up to $5 billion. At the time, I pointed out that J&J could invest that money in R&D or marketing.

However, it now seems painfully clear that J&J will be using that cash to pay off two recent expensive settlements, which could cost the company more than $6 billion combined.

The $4 billion hip implant recall
Yesterday, J&J reached a tentative agreement to resolve over 7,500 lawsuits filed against its DePuy Orthopedics unit for up to $4 billion. The lawsuits claimed that the patients were injured by DePuy's flawed all-metal ASR hip systems.

Depuy's ASR devices were launched in the United States in 2005, but were recalled in 2010 after selling approximately 93,000 units worldwide. These new metal-on-metal implants were intended to be more durable than traditional hip implants, which were usually made of plastic sockets with ceramic or metal balls.

J&J initially admitted that the all-metal devices had a 13% failure rate, which could leave behind dangerous fragments of metal. Those pieces of metal could raise levels of metal ions in the blood, causing bone fractures, dislocations, and infections, as well as tissue, nerve, and muscle damage.

However, the British Orthopedic Association and the British Hip Society claimed that the failure rate was actually much higher -- between 21% and 49% after six years. A later projection from DePuy revealed that the device could actually fail in 40% of patients within five years -- eight times higher than the rate of other traditional hip implant systems.

While a $4 billion ASR settlement would end some of the litigation against DePuy, it still faces thousands of unresolved lawsuits in regards to its discontinued Pinnacle metal-on-metal hip replacement system, which allegedly caused pseudotumors in 28% of the patients.

In 2008, Zimmer recalled a component of its hip implant known as the Durom Cup, which caused some patients severe pain as the cup's range of motion was not adequate for more active lifestyles. In the end, Zimmer set aside $69 million to resolve litigation regarding the product.

Smith & Nephew faced more serious problems after 4,000 of its R3 Acetabular metal liners were recalled between 2009 and 2012. The liner was found to cause bone and muscle complications in patients. A class action lawsuit has not been brought against Smith & Nephew yet, although an attempt was tossed out in Illinois after a judge claimed that the plaintiff's allegations were too vague.

Stryker recalled its Rejuvenate and ABG II hip implants last year for similar problems, although the two devices are not considered metal-on-metal devices. However, the metal components in both devices were found to potentially corrode and cause muscle pain and swelling. The company now estimates that litigation regarding the 20,000 devices that have been implanted in the U.S. could climb to $700 million to $1.13 billion.

A companywide problem
For investors following Johnson & Johnson, the hip recall drama is only the latest chapter in some costly oversights.

Earlier this month, J&J agreed to pay $2.2 billion to settle charges that it falsely advertised its antipsychotic Risperdal Consta for off-label uses. The drug, which is approved to treat schizophrenia in adults, had been pitched as an off-label treatment for other indications, such as anxiety and dementia. The drug is manufactured by Alkermes (NASDAQ:ALKS) and marketed by J&J subsidiary Janssen in the United States.

In retrospect, however, $2.2 billion might be a small price to pay for Risperdal's success over the past decade. J&J reported $24.2 billion in Risperdal sales between 2003 and 2010. Since the drug's patent expired in 2008, sales have faded quickly. Risperdal only generated $326 million in the most recent quarter, accounting for less than 2% of J&J's top line.

Risperdal Consta is also part of another serious problem with Johnson & Johnson, which I highlighted in a previous article -- quality control and drug recalls.

In September, J&J recalled 5,000 vials of Risperdal due to mold contamination. The blunder was only the latest misstep in four straight years of recalls, which shook consumer faith in Tylenol, liquid Motrin for infants, K-Y Jelly, contact lenses, blood glucose meters, and vaginal implants, among other products. The Tylenol debacle was the most embarrassing one for J&J, after the FDA had to take over three of its Tylenol plants in 2011 to ensure that its drugs were safe.

J&J has attempted to smooth over these issues with a major new marketing campaign, but that doesn't address the core issue here -- the company's supply chain is getting too big and fragmented to be effectively managed.

The Foolish takeaway
Within two weeks, J&J has signed away more than $6 billion to settle litigation -- which will more than offset the $5 billion it expects to gain from the sale of its diagnostics unit. 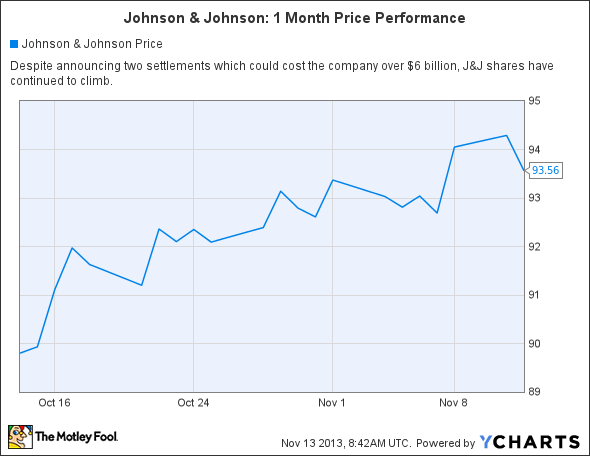 However, J&J stock hasn't been affected too much by these two new developments. The reason is simple -- the company generated a whopping $67.2 billion in sales last year. It also finished the previous quarter with $25.2 billion in cash and equivalents.

Therefore, paying $4 billion and $2.2 billion to resolve mistakes made over the past decade are merely slaps on the wrist for this medical giant.

How Did This Company Lose Over $6 Billion in 2 Weeks? @themotleyfool #stocks $JNJ $SYK $SNN $ALKS Next Article
Current