Read on for three curated reads to satisfy your Foolish curiosity at home, on the train, (or even in the office).

Your mortgage has been declined -- because of fracking
If you were to buy a home in North Carolina, somewhere between 1,500 and 2,000 miles from the booming fracking fields of North Dakota, you probably wouldn't expect your mortgage loan to be declined due to a problem with your properties mineral rights.

And in that regard you'd be wrong. In this article from American Banker Magazine, banks across the country are taking steps to protect the value of their collateral against the possibility of an oil rig being erected next door. Even worse, if you were to sell your mineral rights (read: oil rights) to an energy company and your mortgage happened to be owned by either Fannie Mae or Freddie Mac (OTC:FMCC), in most states these companies have the right to call your mortgage as full due immediately!

Of course, if you're selling the mineral rights for millions, that may or may not be of concern for you.

State Employees' Credit Union [of North Carolina] said this year that it would stop making mortgages on properties that have mineral rights "severed," meaning the landowner sold the oil rights. About 80% of the credit union's $14.5 billion loan portfolio involves residential mortgages.

Oil rigs on a piece of land would affect the values of neighboring properties, says Jim Blaine, the $27 billion-asset credit union's president.

"You could end up where someone puts a drilling platform on that property," Blaine says. "We'd have to tell their neighbors, 'We're sorry, your property value just went down.'"

If a bubble pops in the woods, does it make a sound?
Are we currently witnessing yet another equities bubble? The Dow Jones Industrial Average (DJINDICES:^DJI) and the S&P 500 (SNPINDEX:^GSPC) have been on quite a run (see chart below), but I am no fortune teller. To me, only time will tell. 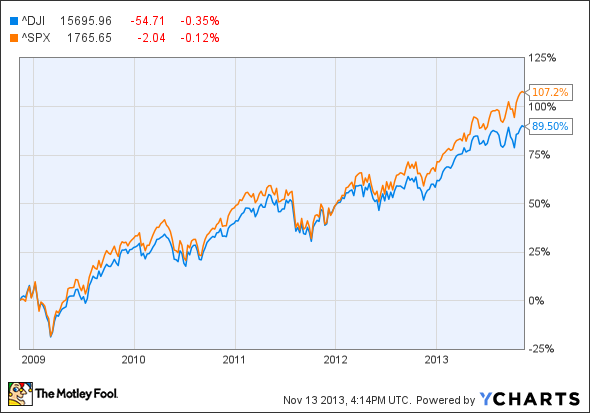 That said, I always find it interesting to read the rules or laws stock market prognosticators use to see into the future of the major indexes and economy at large. This post by David Kass for TheStreet.com was particularly well conceived, "10 Laws of Stock Market Bubbles." Kass' 10 laws for spotting a bubble are when:

While some of the above conditions/laws have been met today, many have not.

Finding diversity in the 1%
Earlier this month, fellow Fool Amanda Alix wrote two articles highlighting the universities and curriculums churning out the highest paid graduates (check them out here and here).

Amanda's articles got me to thinking: We know where the most financially successfully individuals went to school and what they studied, but what do they actually do for a living?

I found this very interesting interactive chart published in 2012 by the New York Times that answers that exact question. An interesting, and unfortunate, excerpt:

School teachers don't earn enough to make the top 1 percent on their own, but many live in 1-percent households, primarily through marriage.