Despite posting an excellent quarter a couple of weeks ago, shares of Under Armour (NYSE:UAA) have retreated by about 6% from their 52-week high. This is fairly common when a stock has risen as far and as fast as Under Armour has (about 60% since the beginning of 2013), as it seems that almost too much good news is priced into the shares. However, I believe that the recent dip in Under Armour is setting up a terrific buying opportunity in a company that could conceivably overtake Nike (NYSE:NKE) within the next decade as the athletic apparel leader.

Recent performance and growth
In its relatively short history, Under Armour's growth has been nothing short of spectacular. It seems like until very recently, Under Armour was simply known as the manufacturer of compression undershirts that had a fantastic reputation for wicking away sweat and keeping the wearer comfortable. However, Under Armour has expanded its offerings to a complete line of athletic clothing and sports uniforms, and sales have soared. 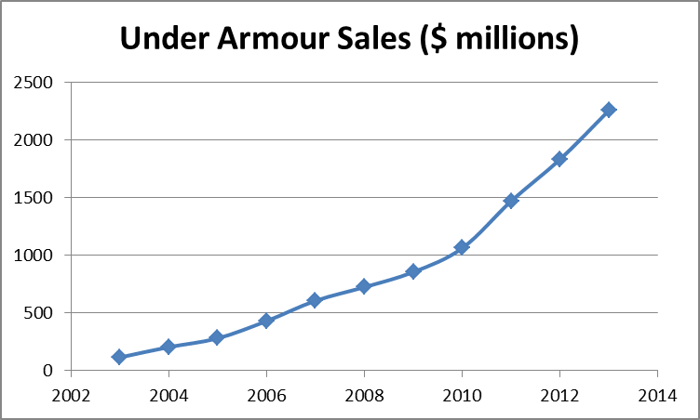 One very impressive fact is that the company's growth actually accelerated during the financial crisis. There are only a handful of companies that didn't see their revenue decrease from 2008 to 2009, and Under Armour's actually increased by 18%.

The quarterly numbers
By virtually any measure, Under Armour posted an excellent quarter. The company reported earnings of $0.68 per share on $723.1 million in revenue, handily beating estimates of $0.66 on $710 million. The company also reported excellent growth in international sales which made up $44 million of its revenue, an increase of 38% from last year but still just 6% of the company's total sales. In contrast, more than half (53%) of Nike's sales come from international markets.

The company's guidance was a positive surprise as well. Under Armour has traditionally issued conservative guidance, but has now upped its 2013 estimate for revenue to $2.26 billion from the previous range of $2.23 billion to $2.25 billion. The company's strongest growth was seen in footwear, with sales rising by 28%, followed by apparel and accessories, where sales rose by 26% and 18%, respectively.

Future potential
When examining the company's future potential, it's almost hard to imagine Under Armour not becoming the market leader eventually. Currently, Nike's sales are higher than Under Armour's sales by more than a factor of 10, with Nike projected to reach $27.5 billion in sales for the current fiscal year. However, Under Armour has a great deal of untapped revenue sources that it has yet to capitalize on.

First, there's the company's international sales growth, which I've already mentioned. While it is true that most of Under Armour's sales come from the U.S., the company is making a strong effort to change that and to increase its brand awareness all over the world. By achieving a global sales mix similar to Nike's over the next several years, Under Armour's sales could double through this alone.

One area Under Armour has not ventured into yet is the $58 billion "active wear" market, which includes athletic-branded apparel that isn't necessarily intended for use while exercising or playing sports (like casual T-shirts). Also, these numbers refer to the U.S. market only. Once Under Armour succeeds in expanding internationally, it could compete in the $135 billion global sports apparel market.

This doesn't even include athletic footwear, which is estimated to be around a $70 billion market worldwide and happens to be Under Armour's fastest-growing product area.

It's expensive, so why not buy Nike?
With the stock at almost 45 times next year's expected earnings, it appears that the market is relatively confident in Under Armour's long-term potential. Nike trades for 25.3 times next year's earnings and it is expected to grow those earnings by 14% annually for the next three years according to S&P. Under Armour is projected to grow its earnings by 21% annually during that time period, but the key difference is in the long-term sustainability of its growth potential.

With an enormous market share and excellent international penetration, Nike can only be expected to sustain high growth rates for a few years. On the other hand, Under Armour's 21% projected growth rate can be sustained almost indefinitely at this point. To put the potential in perspective, at this growth rate Under Armour would hit about $12 billion in annual sales in 10 years, which is about half of where Nike is now. This is certainly an achievable, if not conservative target. However, if Nike were to sustain its lower 14% earnings growth rate for a decade, this would put its annual sales at just under $100 billion, which is higher than the entire footwear market.

Of the two, Under Armour is the clear choice for sustainable, high rates of growth, which should translate into higher profits as the company gets larger and runs more efficiently. The recent post-earnings dip has created a very nice buying opportunity to get in before the next leg up.