Pharmacyclics and Johnson & Johnson recently received Food and Drug Administration approval for their eagerly anticipated blood disorder treatment, Imbruvica. What does this mean for industry peers Celgene and Gilead Sciences, which are also developing treatments for similar indications?

However, the market response was more tepid than expected, with shares of Pharmacyclics closing just 3.5% higher on November 13 after the eagerly anticipated announcement.

In my opinion, that reaction was due to three key factors --

Therefore, even though the approval of Imbruvica is good news for investors, we should dig deeper into Pharmacyclics' story to see if the stock has gotten ahead of itself.

Could Pharmacyclics be the next Celgene (CELG)?
The bullish argument behind Pharmacyclics is simple -- once Imbruvica is approved for both MCL and CLL, annual peak sales could soar as high as $6 billion to $9 billion, according to analyst projections. Since Pharmacyclics will split marketing costs and revenue in half with Johnson & Johnson, that translates to $3 billion to $4.5 billion in annual revenue -- not bad for a company that only generated $79.1 million in revenue last quarter.

Besides Imbruvica, Pharmacyclics doesn't have any other marketed products -- its revenue is completely generated by license and milestone revenues, primarily from Johnson & Johnson.

Pharmacyclics bulls believe that the company could be another Celgene in the making. After all, shares of Celgene have soared nearly 400% since 2005 when it first received marketing approval for Revlimid, its blockbuster blood disorder treatment which now accounts for 65% of its revenue.

If we compare Celgene's price history to its P/E ratio over the years, we see the growth that Pharmacyclics investors are probably hoping for -- a big jump in market value stabilized by a steadily declining P/E ratio. 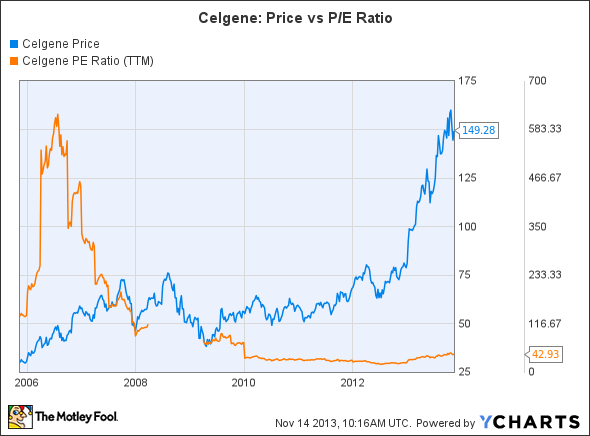 What direct competition will Pharmacyclics face?
Pharmacyclics' Imbruvica is the third drug to be approved to treat MCL, which affects approximately 15,000 people in the United States. The two other treatments are Celgene's Revlimid and Velcade, from Takeda Pharmaceuticals and Johnson & Johnson. Sales for Revlimid and Velcade were both very robust last quarter.

However, that doesn't guarantee success for Imbruvica. Sales of Revlimid and Velcade were not generated by MCL alone -- they were also boosted by other indications, such as multiple myeloma.

Revlimid should not be considered a direct competitor to Imbruvica, since it is only approved for patients with relapsed MCL who have received at least two prior treatments. Velcade, on the other hand, is considered a direct competitor, since it is also approved for relapsed patients who have received at least one prior treatment.

However, Imbruvica's reported overall response rate of 65.8% was much higher than the 31% rate reported for Velcade upon its approval in 2006. In addition, Imbruvica's side effects, which include diarrhea, infections, bleeding, bruising, and reductions in platelets and white blood cells, are considered milder than those of Velcade, which can cause a much wider variety of problems.

Could a delayed CLL approval be a problem?
Despite that good news, Pharmacyclics investors are still concerned about the lack of approval for CLL, which accounts for more than 15,000 patients in the United States alone. Pharmacyclics and J&J both stated that the FDA is continuing to evaluate its application for CLL.

For now, investors shouldn't fret too much about the delay. Pharmacyclics' only real competitor in second-line CLL treatments is Gilead Sciences, which recently halted a phase 3 study of its CLL drug, idelalisib, due to overwhelmingly positive results. If approved for both CLL and its other indication, indolent non-Hodgkin's lymphoma (iNHL), analysts believe that idelalisib could generate peak annual sales of $500 million -- not a blockbuster drug, but still a good way for Gilead to diversify away from its core antiviral portfolio.

There will likely be enough room in the market for both new treatments, which will inevitably be considered better alternatives to current second-line CLL treatments, which include fludarabine, alemtuzumab, and purine analog drugs -- which are all less effective, with comparatively unfavorable side effect profiles.

The Foolish takeaway
For now, investors shouldn't worry about Imbruvica's lack of immediate CLL approval. With the MCL approval alone, Imbruvica can launch immediately and start generating revenue for Pharmacyclics and Johnson & Johnson.

Now that Pharmacyclics finally has a marketed product, we can finally see if analysts' lofty sales estimates were accurate and if the company can justify its premium valuation, gradually cooling its P/E ratio down and making the stock a safer long-term investment.