Now that gaming has spread across the country and around the world, there are lots of locations for investors to choose from. There are options everywhere from Atlantic City and Biloxi to Singapore and Macau.

Despite all of these options, if you're looking to make the jump into gaming stocks, there's really only one place for you to invest: Macau.

Head and shoulders above the rest
The U.S. regional gaming market offers the most options for investors, but it's also the most crowded. Places like Pennsylvania, New York, Massachusetts, Kansas City, and others either have expanded or will expand gaming in the future. This is part of a revenue grab by local governments, which have looked for any ways to increase revenue in recent years.

The expansion of gaming has been good for industry revenue as a whole, but little of that money has flowed to the bottom line because there are more casinos fighting for gaming dollars. The industry has essentially cannibalized itself, resulting in flat to declining EBITDA for some of the industry's biggest regional players. 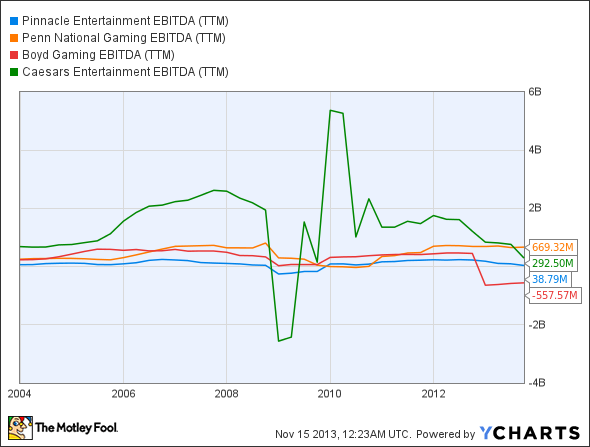 Asia is an entirely different story. Macau is the only place in China where gambling is legal and Singapore is the only other major market with casinos -- and there are only two casinos there. The result has been incredible growth for gaming companies. You can see below that EBITDA has risen consistently for Las Vegas Sands (NYSE:LVS), Wynn Resorts (NASDAQ:WYNN), and Melco Crown (NASDAQ:MLCO) over the past decade. Along with MGM Resorts (NYSE:MGM), these are the four U.S.-traded companies with operations in Macau. 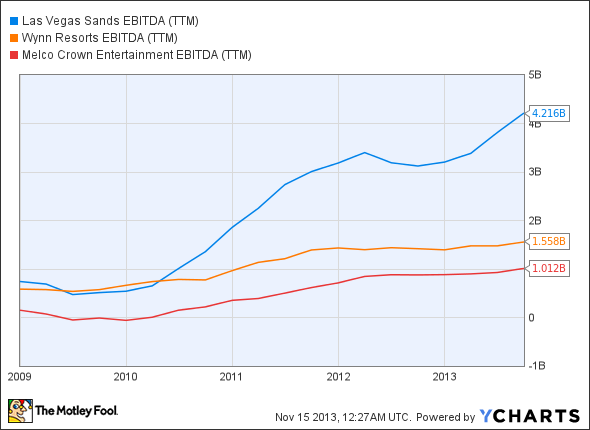 The advantage for these companies is that the amount of money being gambled is growing and competition is limited.

Reasons to believe in Macau's future
Macau is now more than six times the size of the Las Vegas Strip, and it's grown 18.4% in the first 10 months of the year. It also has very limited supply and billions of customers within a short plane ride. For casino operators, it's a dream situation.

The government has limited concessionaires to the four I mentioned above, Stanley Ho's SJM, and Galaxy. These companies are also limited on what and when they can expand capacity as well. MGM and Wynn both have a single resort on the Macau Peninsula, where Las Vegas Sands built its first Macau resort. But the real upside is in Cotai.

You can think of Cotai as the Las Vegas Strip of Macau. It is reclaimed land between the islands of Taipa and Coloane, a blank canvas built especially for the gaming industry. As infrastructure improves and more resorts are built, it will continue to attract more people. You can see below a few of the infrastructure improvements coming to the area and the resorts being built, and there's also a light rail being installed to connect different parts of Macau.

All of these improvements in infrastructure and attractions will bring more gamblers, something China doesn't have a shortage of. As the Chinese economy improves and the middle class grows, there's more disposable income to spend in Macau.

I think Melco Crown has already been priced for perfection, and MGM Resorts has more exposure to Las Vegas than Macau, taking it out of the equation.

If Macau continues to grow, Las Vegas Sands will benefit the most, simply because of its major exposure there. However, I think Wynn Resorts has the biggest upside because it is building a new resort on Cotai that could double its revenue and EBITDA. But, really, you can't go wrong with either stock.