All of the turmoil surrounding Jamie Dimon and JPMorgan Chase has begun to show its effects through how employees perceive this once highly esteemed company and CEO.

Jamie Dimon and JPMorgan Chase (JPM -0.35%) were once considered to be the creme de la creme when it came to banks and prestige. Yet the recent litigation and settlements have begun to take their toll on the once-proud banker, and we have the data to prove it.

The Motley Fool recently received the CEO Approval and Company Rating for Jamie Dimon and JPMorgan Chase from popular employment feedback site Glassdoor, and those numbers have begun to tell a different story:

As you can see in the chart above, employees, often Dimon's most staunch defenders, have begun to cast him in a less and less favorable light, with his rating falling in each passing quarter in 2013. Consider that the London Whale saw only slight ill effects on his rating, as the fourth quarter of 2012 was actually better than the second.

While Dimon still holds a higher approval rating than peers Brian Moynihan (68% in the third quarter) at Bank of America (BAC 0.85%) and John Stumpf at Wells Fargo (WFC 0.20%), the gap between Dimon and Stumpf has narrowed considerably over the last six quarters: 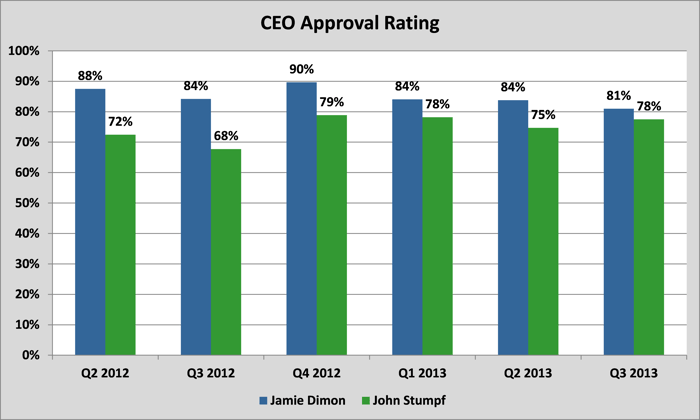 You can also see that when you compare Dimon to the best CEO in the industry, Richard Davis of U.S. Bancorp (USB -0.24%), Dimon narrowed the gap between their approval ratings to just 2% in the fourth quarter of last year, but the two have been on rather divergent paths in 2013, and that gap now stands at 16%: 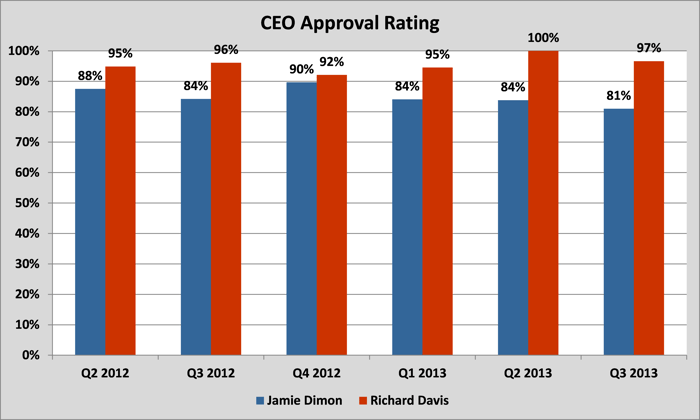 Jamie Dimon and JPMorgan Chase were once held as the most highly regarded company and CEO tandem in the banking industry, but recent data suggests that luster is beginning to fade, and things may indeed begin unraveling for this proud CEO, and perhaps even his company.

Consider that in the 18 quarters from the third quarter of 2008 to the fourth quarter of 2012, Dimon had an approval rating below 84% only four times. It has now happened three times in a row.

The praise
Despite being with JPMorgan Chase throughout the financial crisis,  the subsequent $25 billion government bailout, Occupy Wall-Street demonstrations and countless other events, Jamie Dimon was largely immune to the ire directed toward the biggest banks.

There was the 2010 The New York Times story, "Jamie Dimon: America's Least-Hated Banker," the BloombergBusinessweek story that explained "Why JPMorgan's Jamie Dimon Is Wall Street's Indispensable Man," and the Vanity Fair articlethat noted, "Tom Brady told [Dimon] to "hang in there" as the London Whale crisis unfolded."

He was friends with Barack Obama, and Warren Buffett voiced his support of Jamie Dimon when the rumors abounded that Dimon may be the next Treasury secretary. Buffett said on the Charlie Rose show last Novemberof the prospect of Dimon becoming the heir apparent to Timothy Geithner:

"I think he'd be terrific. If we did run into problems in markets, I think he'd actually be the best person you could have in the job."

The questions
Yet things have begun to slowly unravel over the last year and a half for Jamie Dimon and the bank he runs. First, there was the $6.25 billion London Whale fiasco in the spring of 2012, then a call from shareholders in May of 2013 for Dimon to step down as chairman and retain only his position as CEO. Then, the proposed $13 billion settlement with the government in October of this year related to issues surrounding its mortgage practices.

All of that even excludes reports of regulators looking into the possibility of JPMorgan bribing officials in China by hiring their children, the revelation that regulators have begun to investigate its foreign exchange trading practices, the reports that the government may take undertake a criminal investigation of JPMorgan Chase for the bank's role in the Bernie Madoff Ponzi scheme, and many questioning the bank's role in the LIBOR scandal.

A lot of people have noted that Jamie Dimon and JPMorgan Chase have remained largely immune to the undercurrent of questions that continually swirl about the bank and its esteemed CEO, with The New York Times going so far as recently dubbing Dimon "the Teflon CEO." Yet employee feedback suggests that his coat of armor may be waning.

We don't really know how Dimon's legacy and JPMorgan Chase will be affected by these recent events, but if the employee feedback is any indication, the once-proud CEO could be edging toward the end of his reign as America's favorite banker.