I recently sat down for lunch with a good friend, Mike, to chat about savings and investing. I asked him what he hoped to take away from our conversation, and he said with a smile, "I want to make the most amount of money with the least amount of effort." Our conversation spanned far and wide, but there were three things that I think will help anyone who has the same mindset as he does.

Save, save, save
Mike is a 25-year-old in a marketing profession and has met with success thus far in his work thanks to his diligent efforts. He has started to see his job not simply an occupation but as a career, and his company not as a provider of paychecks but as an employer. As he considered what the next 40 years of his life might look like, he began to think about preparing for retirement, and that's where I came in.

My first piece of advice for him was to make a budget and begin saving. He's a salaried employee, so he knows what his monthly income will be. I advised him to start by thinking of what percentage of his income he'd like to save, taking that amount off the top, and then setting out budgeting parameters for housing, insurance, food, a car, and other expenses. Devoting one hour a month to keep track of that budget can go a long way over the course of a lifetime.

Yet if he saved just 2% more each month ($75 per month in year one) with a savings rate of 7% over the course of his career, his savings would grow to $475,000. Those small incremental savings can make a huge difference over a number of years. The following graph shows the dramatic difference one or two percent can make in our employee's scenario: 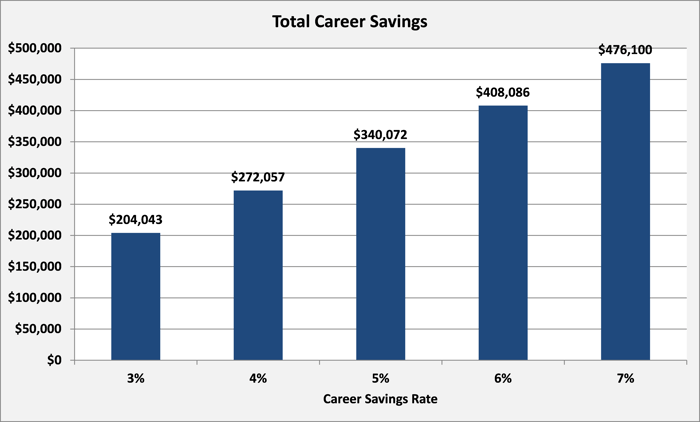 To make this saving effortless, you can set up monthly transfers so your bank can move the money you set aside automatically from your checking to your savings account. Some companies will also allow their employees to have a certain percentage of their checks direct-deposited into separate accounts. The bottom line is that diligently saving is the most important step to begin making money with the least amount of effort.

Invest carefully and diligently
While $475,000 is a lot of money, over the course of a career, any advice on savings has to be coupled with advice on investing. I learned that Mike had a company 401(k) plan that offered to match half of what he contributed. Many companies offer these benefits, and workers should absolutely take advantage of them. Learning what options are available, whether through a 401(k) plan, Roth IRA, or some other savings vehicle, is an absolutely essential part of investing carefully. So is taking advantage of tax benefits, or free money your employer is willing to give you.

Another key aspect of saving is to not be swayed by one-time fads or trends. One can easily be sucked into a belief that there's a new hot trend that will, for example, let you double your money in six months. Just remember the adage that "if it sounds too good to be true, it probably is," and stick to safe means for investing. It won't be exciting, but it'll yield results down the road.

On the subject of diligence, I also told Mike to not be swayed by the commonly held belief that investing is in a sense like gambling and is dictated primarily by luck. With a good amount of research and effort, one can find individual stocks that are likely to beat the market. However, since Mike wanted to again "make the most amount of money with the least amount of effort," I told him that he should take his savings and put it into mutual funds.

Mutual funds do all of the hard work and effort to create investments that match what someone is looking for, whether it be retiring in a specific year or just one that matches a specific sector or the market as a whole. I encouraged him to consider a fund that simply tracked the S&P 500, which has historically returned about 7% per year. By selecting one with a low cost, one can mimic that return pretty easily.

Invest patiently
I know that 7% doesn't sound like a lot. Yet thanks to the beauty of compound interest, an investment that gains 7% per year will double roughly every 10 years. By never touching your money and simply patiently waiting until the day you retire, you can rack up an incredible return at the end of the road.

Going back to our previous example of a 25-year-old with a $45,000 salary, let's say that person decides to save 6% per year in a 401(k). Let's also say his company will match half of that amount, or 3%, and that he had every dollar of savings placed into an S&P 500 index fund over the course of his career. Let's then say he did that every week until age 68 and never touched his retirement account until he retired. Do you know how much he would have at the end of that time with a 7% return? 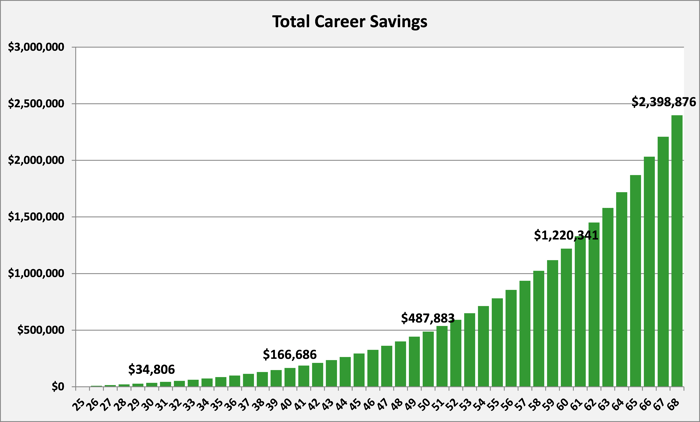 The bottom line
Though it looks small at first, through diligent, patient saving over the course of a career, one can make an incredible amount of money without a whole lot of effort.