Please ensure Javascript is enabled for purposes of website accessibility
Log In Help Join The Motley Fool
Free Article Join Over 1 Million Premium Members And Get More In-Depth Stock Guidance and Research
By Todd Campbell – Nov 16, 2013 at 8:17AM

The appeal of analyzing big data for better outcomes isn't limited to doctors and patients. It's also disrupting how pharmaceutical and biotechnology companies develop drugs.

As cost-conscious drugmakers look to shave millions in expenses, they're increasingly embracing analytics solutions from companies like Medidata (MDSO).

A straightforward concept
Drug development bottlenecks and inefficiencies mean drug developers are forking over big money to amend trials. But, it's not just the cost of changing trials on the fly weighing down drug maker profits. Those changes mean delays, and delays mean lost sales to competitors.

Their solutions are helping drug developers ensure the right patients and endpoints are selected ahead of time. And they are providing real time feedback on patients that can be parsed to improve mid- and late-stage trials, too.

A ripe market for new solutions
IMS Health estimates 60% of the $110 billion spent annually on drug research and development is spent on clinical trials, and a single company with 100 ongoing clinical trials wastes $26 million a year on preventable trial design flaws and patient recruitment challenges.

Consider that in relation to the $800 billion that drugmakers spent on research and development over the past decade to launch 252 new molecules in the United States and you begin to see why Medidata and Oracle are so interested. Or, said another way, multiplying the $26 million in savings across the industry suggests that drugmakers could save a combined $1 billion annually on just these preventable issues, according to IMS.

But that may understate the opportunity. Why? Because the complexity and scope of trials is growing, not shrinking. Across recently approved molecules, the average trial had nearly 4,700 participants in 2011, up from 2,200 in 2008.

That's creating a whole new set of challenges tied to recruiting patients for trials, particularly given that the pressure to keep pipelines flush in the face of high-profile patent expirations is increasing.

Translating opportunity into profit
From 2005 to 2008, Medidata grew its share of the electronic data capture market, or EDC, from 9% to 30%. Since then, the company has taken its solution to the cloud, creating a unified clinical platform that expands its addressable market from the $1.5 billion EDC market to the $6 billion clinical cloud market.

The shift to a software-as-a-service model gives Medidata more flexibility to deploy changes and sell its solution. It seems to be working. Medidata's 379 customers include big drug companies Amgen, Pfizer and Roche; major contract research organizations, such as Covance and Paraxel; and medical device companies like Boston Scientific.

Medidata added 100 new customers in the past year, and its exposure to its five biggest accounts has dropped to 29% of total revenue, down from 43% in 2010.  More importantly, 47% of Medidata's customers have bought more than one product, up from 36% last year.

As its client base is getting bigger and penetration into accounts is growing, Medidata's sales are climbing. Revenue grew 27% to $70.9 million in the third quarter from a year ago. And higher-margin applications and services sales were up 32% to $57.9 million, which helped gross margins climb to 76% from 72% last year. 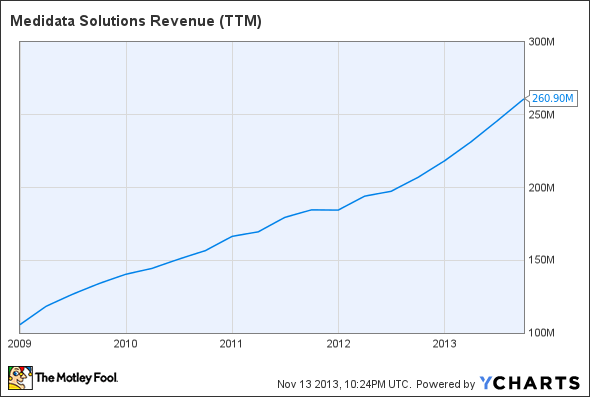 Heading into next year
In Medidata's third-quarter earnings conference call, the company reported that its pipeline was the biggest it has been in its history. That's pretty impressive given that the company's market share among the top 50 biopharma plays has already grown to 76% in 2012, up from 64% in 2008.

But the company will still face tough competition from Oracle. Oracle acquired the largest EDC player, Phase Forward, for $685 million in 2010.  And Oracle claims 20 of the 20 largest pharmaceutical companies and 10 of the top 10 contract research organizations still run Oracle applications.

As these companies battle for dominance, each still needs to spend on acquisitions, personnel and innovation. That will weigh on earnings. However, some of those costs will be offset as more customers sign up for high margin software.

The Foolish final thought
Big drugmakers will be wrestling with patent expiration through 2015, which means they'll remain interested in solutions that may lower costs and improve the chance therapies eventually win FDA approval. That means there's a good opportunity for Medidata to win customers and grow earnings over the next few years.  If so, it might be a good time to consider Medidata as a pure play in the clinical IT market.

Todd Campbell has no position in any stocks mentioned.  Todd owns E.B. Capital Markets, LLC, an institutional research firm. E.B. Capital's clients may or may not have positions in the companies mentioned. Todd also owns Gundalow Advisors, LLC, a high net worth advisory. Gundalow's clients do not own shares in the companies mentioned. The Motley Fool owns shares of Oracle. Try any of our Foolish newsletter services free for 30 days. We Fools may not all hold the same opinions, but we all believe that considering a diverse range of insights makes us better investors. The Motley Fool has a disclosure policy.

Why Earnings Are Causing Medidata Solutions Shares to Drop 10% Today