Stephan Dube
(steph4507)
Author Bio
Stephan is a Canadian private investor specializing in energy stocks. Monitoring a few of them and digging out some great gems along the way provides a personal insight for American and Canadian investors.

The recent discoveries in offshore Cyprus, more precisely in the Levant Basin, a stretch of sea that extends from the coasts of Israel, Lebanon, and Syria, is estimated to hold about 122 Tcf (trillion cubic feet), a huge deposit of gas. 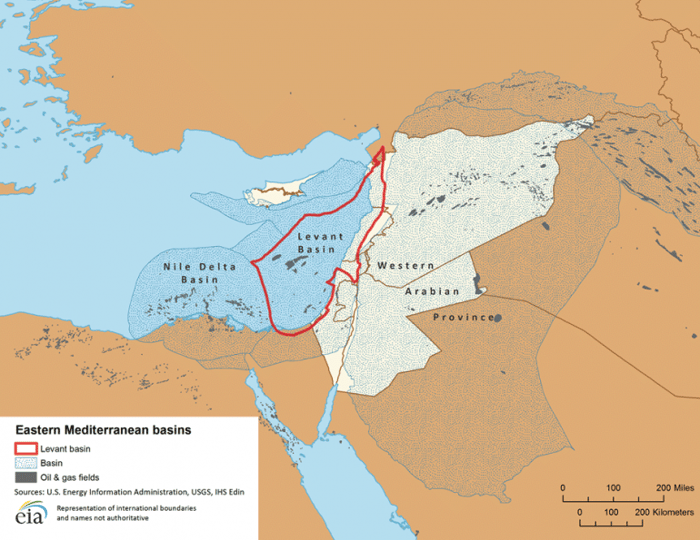 Notably, Noble Energy (NASDAQ:NBL), headquartered in Houston, found a large gas field named Aphrodite in deep water off southern Cyprus in December 2011, a deposit estimated to hold about 3.6 Tcf. However, by itself, it wouldn't be enough to make an LNG plant economically viable since about 6 Tcf of gas is usually necessary. Nonetheless, with the recent findings, other major players are getting attracted in the area, in an effort to further explore the Levant Basin and assess its commercial potential.

According to Noble, its A-1 field discovery offshore Cyprus would have the capacity to deliver as much as 250 Mmcf/d of gas and its recent drilling activity indicated that Aphrodite's estimates would contain gross field resources of about 3.6 Tcf to 6 Tcf.

Furthermore, Noble found a very large field called Leviathan in Israeli waters, not far from the Cyprus boundary, which adds to its overall interests in the area. As a matter of fact, Leviathan, discovered in December 2012, represented the largest exploration find in Noble's history. Leviathan has been assessed to hold over 17 Tcf of gross gas resources, the largest deep water natural gas discovery in the world over the last ten years, according to the company.

Notably, Noble is also exploring the Block 12, a 40-square mile area in southeastern offshore Cyprus, an area owned by a joint-venture including Noble, Delek Drilling, and Avner Oil Exploration. Noble is the operator as well for this area.

With the abundant resources recently uncovered by exploring companies, the Cypriot government has contemplated the idea of establishing an LNG export facility in order to seize the opportunity of making profit by shipping its potential natural gas reserves to lucrative markets in Europe and Asia, thereby competing with other countries such as Australia, Angola, and soon the U.S. Can Cyprus become the European energy hub and turn its fortune around from the collapse of its banking industry? Only time will tell for now.

Nonetheless, the Cypriot government started the framework for a potential LNG facility that would be located near Vasilikos in the industrial zone, on the south coast of the island, and would include the involvement of French oil giant Total SA (NYSE:TOT). The facility would comprise three LNG trains initially, with the possibility to add five more.

As a matter of fact, the latter would even be interested in being in charge of such a large project, and a partnership with other producers like Noble Energy remains a high possibility. Total would be a perfect fit since the company announced in last February that it has signed two production sharing contracts for Blocks 10 and 11 with the Cypriot government for the proper licenses. The areas that were granted are covering about 1,600 square miles and 1,840 square miles respectively, southwest of Cyprus, in water depths ranging from 3,280-8,200 feet.

Total's presence in the eastern Mediterranean region is not new. The company also owns 18.75% in working interest in the Halfaya joint-venture located in Iraq, from which it achieved first oil in June 2012. Production capacity is expected to ramp-up to 535,000 Bbls/d by the end of 2016 when Phase 3 is achieved.

Another producer is exploring the Levant Basin as well for commercial purposes. This major energy producer is present in more than 90 countries and is one of the largest integrated companies worldwide. Eni (NYSE:E) has produced 1,701 Kboe/d in 2012 from which 55% was produced in Africa, 22% in Europe, and 14% in Asia.

Last January, Eni announced a production sharing contract for Blocks 2, 3, and 9, an area covering over 7,785 square miles with the Cypriot government, in which the company has 80% in working interest. Furthermore, Eni could be interested as well in a partnership with the Cyprus LNG terminal project if its explorations prove successful. The company's exploratory drilling is scheduled for the second half of 2014.

My Foolish take
The recent discoveries in the Levant Basin are arriving in a timely manner for Cyprus, and this huge opportunity to recover and ship the commodity to lucrative markets would boost a failing economy that still struggles to recover from its banking industry crisis. Inevitably, the Cypriot government will develop its natural gas industry in partnership with well established energy producers.

Noble, Total and Eni are very well positioned to profit from that opportunity since these producers are currently operating successfully in that somewhat unstable geopolitical region of the globe. Finally, the Cyprus play represents plenty of potential, and if the government can manage to build its LNG export terminal without too much political trouble, its location could turn into a genuine European energy hub, generating tons of cash flow for investors who were gutsy enough to get into that venture.