AK Steel (NYSE:AKS) has been bleeding red ink since the end of the 2007 to 2009 recession, including losses in nine out of the past ten quarters. The company's heavy exposure to the auto sector has turned into a bright spot lately, but it also exposes some major risks you need to consider.

A good market
The steel maker generates about half of its revenues from the auto sector. That's a big diversification issue, but one that's been working in AK Steel's favor as the auto makers have been recovering from the deep recession. "Indeed, the trends for automotive production and consumption have been very good ones for AK Steel," according to the company. Backing that up, competitor Nucor (NYSE:NUE) noted that automotive is one "...of the strong markets out there today."

And AK Steel benefits from long-term contracts, some of which are "decades old, if not more than a century old." That puts the company in a good position, but the recovering auto trends haven't pushed the bottom line into the black. The company's costs are one issue to look at, but so, too, is the fact that around half of the business is tied to just one sector.

Setting records?
In the just ended quarter, AK Steel highlighted that results from its auto segment were among the best since... 2008. In other words since the recession dragged two U.S. automakers into bankruptcy court. It begs the question, "Does AK Steel need auto sales to be at record levels for it to make money?" Nucor, which is increasingly looking to sell into the same market, has made money in ten of the last ten quarters. That's some comparison and doesn't put AK Steel in a good light.

While Nucor has been a standout performer in the steel industry, making the above comparison somewhat weighted, it isn't the only steel maker looking at the space. U.S. Steel (NYSE:X), for example, describes the auto industry as "a strategic priority."

Like AK Steel, U.S. Steel has been turning in losses, though not to the same degree—losing money in "just" six of the last ten quarters. But it shows that everyone wants into the same sector because it's doing so well. So, even if the auto sector is expanding again, AK Steel is looking at competition that will be heating up, not cooling down.

New rules
One of the reasons why the steel makers are so excited about the auto sector is more stringent corporate average fuel economy (CAFE) mileage standards. Nucor, U.S. Steel, and AK Steel are all working on light weight, but very strong, steel to help the automakers meet rising CAFE standards. That's good news, but also bad news.

For example, while lighter weight steel is a great opportunity, removing relatively heavy steel products from cars is also a way to reduce gas mileage. Aluminum and high-tech fibers could, because of their light weights, easily displace steel in some areas of a car. That's particularly true as you watch companies like Boeing (NYSE:BA) embrace such products in its airplanes, proving these products' strength and quality with every mile flown. Boeing has also extended its aluminum recycling agreement with Alcoa (NYSE:AA). The two expect around 8 million pounds to be recycled annually.

An eye on both
If you are considering buying AK Steel, then you need to also examine the auto sector. While the trends are moving in the company's favor today, the auto industry's performance during the recession took a huge toll on AK Steel's stock price. A repeat performance would clearly be unwelcome. 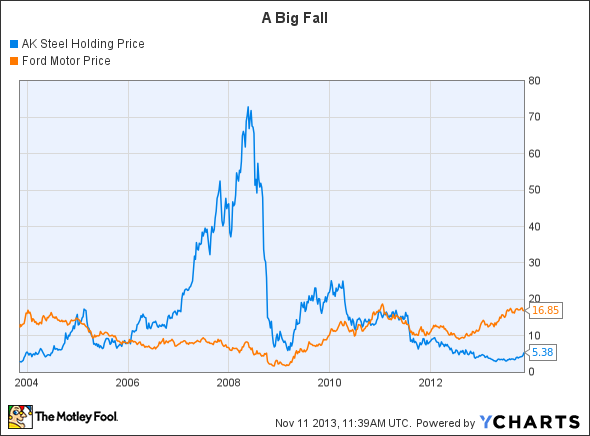 And with Nucor "setting [itself] up to participate more in the automotive industry going forward," and U.S. Steel considering the space a strategic priority, AK Steel may find that the road gets increasingly crowded. Add in competing materials and having 50% of its business tied to cars, this reliance could start to look like a long-term liability.

Which 1 of these stocks do we believe could help you retire rich?