Investors love stocks that consistently beat the Street without getting ahead of their fundamentals and risking a meltdown. The best stocks offer sustainable market-beating gains, with robust and improving financial metrics that support strong price growth. Does PotashCorp (NYSE:POT) fit the bill? Let's look at what its recent results tell us about its potential for future gains.

What we're looking for
The graphs you're about to see tell PotashCorp's story, and we'll be grading the quality of that story in several ways:

What the numbers tell you
Now, let's look at PotashCorp's key statistics: 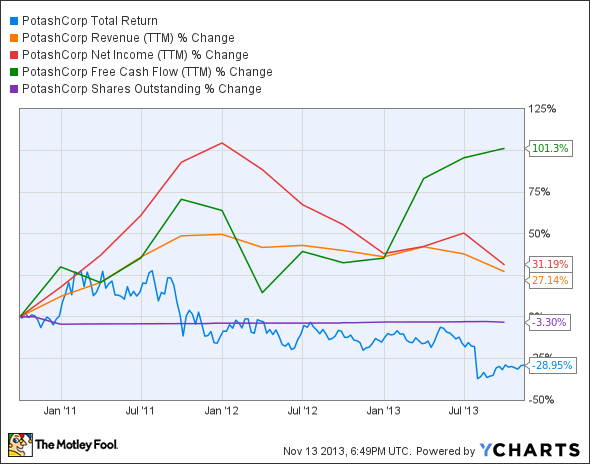 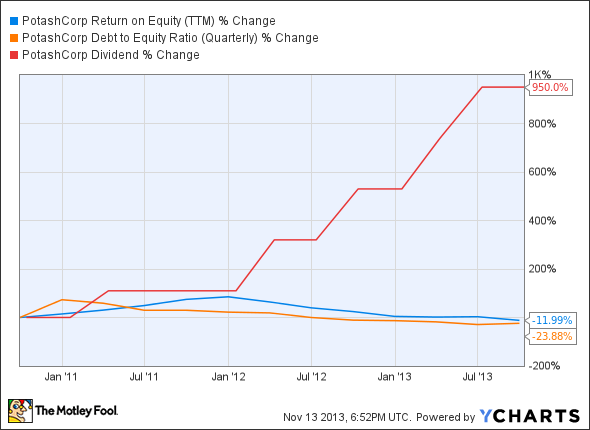 How we got here and where we're going
We looked at PotashCorp last year, and it has come through with flying colors in its second assessment, finishing up once again with six out of nine possible passing grades -- the same grade it earned in 2012. The company barely missed the mark on revenue metric because of excessive supply in the U.S. fertilizer market, and its free cash flow payout ratio has soared along with its dividend. However, on balance, this is still a solid performance. Can PotashCorp push its revenue growth even higher over the next few quarters? Let's dig a little a deeper to see what might lie in store.

PotashCorp and its peers have been struggling lately because of a combination of oversupply in the market and by the end of a critical Russian potash cartel. Uralkali's decision to terminate its cartel relationship with Belaruskali, which controlled around 40% of global exports, has jeopardized the industry's profitability as lower-cost potash flooded the market. In an effort to counteract the resultant price plunge, PotashCorp recently decided to cut back production levels at its Lanigan and Rocanville mines. Fool contributor Chris Martin notes that the delays and setbacks at PotashCorp's production sites might result in a reduction of global potash capacity.

Fool contributor GC Mays notes that nitrogen-focused fertilizer producer CF Industries (NYSE:CF) followed PotashCorp and Mosaic's (NYSE:MOS) lead by posting lower revenues and earnings on declining prices and volume, which stemmed from a huge decline in corn prices. However, CF Industries has agreed to a deal with Mosaic under which it will supply 600,000 to 800,000 tons of ammonia annually for up to 15 years, which could undermine PotashCorp's already weakened position. In an effort to diversify from its hard-hit potash business with more profitable, Mosaic also recently purchased CF Industries' phosphate business for $1.4 billion. These consolidative moves by two major competitors could bode ill for PotashCorp, which may need to find a partner as well.

PotashCorp's difficulty sustaining its pricing power is underscored by recent reports from sulfate of potash (SOP) producer Compass Minerals (NYSE:CMP), which charged a hefty premium of almost $300 per ton against Potash Corp's prices for muriate of potash. Efforts to move away from SOP sales seem to be the right choice -- PotashCorp peer Intrepid Potash's SOP sales fell by 37%, while the average price received has slumped nearly 14% in the last quarter. Even ore miner BHP Billiton has recently jumped into the fertilizer industry with a $2.6 billion build-out of a potash mine in Canada, which is all but certain to produce further downward pressure on potash prices.

Putting the pieces together
Today, PotashCorp has some of the qualities that make up a great stock, but no stock is truly perfect. Digging deeper can help you uncover the answers you need to make a great buy -- or to stay away from a stock that's going nowhere.