One of the most important merger and acquisition deals in the history of the pharmaceutical industry occurred on Dec. 15, 2000, when Abbott Labs (NYSE:ABT) purchased Knoll Pharmaceuticals from BASF (OTC:BASFY) for $6.9 billion. Abbott has since spun off its pharmaceutical division into AbbVie (NYSE:ABBV) to focus on medical devices, diagnostics, and generic pharmaceuticals; but investors in both companies are still witnessing value creation from the deal made 13 years ago. That's largely thanks to the developmental monoclonal antibody included in the deal. D2E7 is known today as Humira, which is expected to bring in $10 billion in sales in 2013.

If you had listened to the short-term fears of Wall Street analysts at the time, you would have missed out on some spectacular gains. Many shouted  "Dilution!" and "Lack of execution!" when the deal was announced. Many also questioned management's ability to pull off such a deal, and Abbott shares actually sank 7.1% when it was officially announced. Turns out that was a phenomenal buying, not selling, opportunity. 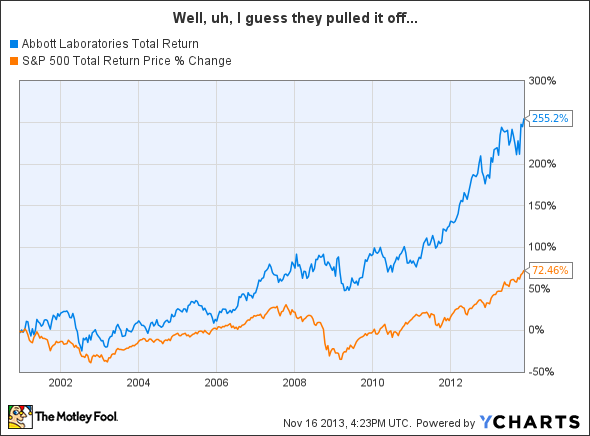 Nonetheless, many analysts raised questions about the deal or what value it would actually add to Abbott. An analyst from Salomon Smith Barney questioned, "Will it solve Abbott's problems in a real way? Will it be worth the dilution?" The acquisition actually only affected Abbott's earnings by $0.12 per share in 2001, or about 5% of prior-year earnings. Things changed quickly as Knoll was fully integrated into the business, and 2002 earnings per share soared 80%. Good thing everyone worried about execution and dilution.

It's easy to see how wrong analysts were in hindsight, but there are some important lessons to be learned about the importance and necessity of buy-and-hold investing. Let's set the clock back to 2000 to revisit the situation at the time and see why Wall Street was so wrong.

History of the deal
Abbott Labs had long been criticized for having weak research and development capabilities, offering a lowly budget of just $600 million in 2000 compared to the $2 billion-plus bankrolls seen across the pharmaceutical industry. A lack of potential blockbuster drugs on the market or in the pipeline also drew Wall Street's ire. The company reached sales of $13.7 billion in 2000, although its pharmaceutical division only contributed about $2.6 billion to that total despite being the driving force for income. To make it worse, pharmaceutical sales slipped 4% in 1999 compared to the prior year and it's top drug, Depakote for bipolar disorder, only brought in $700 million a year.

Meanwhile, BASF Knoll generated $2.1 billion in sales in 2000, largely from aging assets such as obesity drug Meridia ($400 million) and thyroid treatment Synthroid ($150 million). And while the company's research and development budget was just $300 million, it had churned out some of the most highly coveted developmental monoclonal antibodies in the industry.

It was no secret, then, that any company eyeing BASF Knoll was focused on its pipeline and sales force. In fact, D2E7 was so highly coveted by pharmaceutical giants that Abbott nicknamed the compound "Color" during acquisition talks in case word leaked out to the media or analysts.

Still, Wall Street analysts had only pegged eventual sales of D2E7 at $1 billion per year. To be fair, the importance of monoclonal antibodies was still emerging at the time; few could have predicted that three drugs targeting the same biochemical target, TNF-alpha, could reach annual sales in excess of $7 billion each by targeting multiple autoimmune diseases.

D2E7 became Humira when it hit the market in 2002 for rheumatoid arthritis and forever changed the trajectory of Abbott and AbbVie. It isn't quite done creating value, however.

Knoll is still paying dividends
Investors have to consider the bigger picture of Humira sales. The piles of cash and income generated from the drug over the years were either paid out in dividends to shareholders or poured back into Abbott's business. Dozens of new products introduced in the last 13 years, and many more in development today, can trace their lineage back to Humira and the BASF Knoll acquisition.

The combination of international sales for all business segments in Abbott's 2000 financial reports, the spinoff of AbbVie, and a restructuring or two really complicates comparisons between then and now. However, it's obvious that Humira was a rare catalyst. Consider how continuing operations at Abbott (everything except novel pharmaceuticals) and pharmaceutical operations at AbbVie (now total sales at the company) have grown compared to their 2000 benchmark.

There may have been short-term concerns at the time about dilution or management's ability to execute, but those are rarely justifiable reasons to ditch a company. Ironically, Wall Street criticized Abbott for a lack of research muscle and potential blockbuster drugs in 2000. As soon as management moved to fill those holes, Wall Street screamed about dilution and wondered if the acquisition was enough. That doesn't make any more sense today than it did in 2000.

Foolish takeaway
While difficult, adding up all of the growth catalyzed by the BASF Knoll deal is an amazing experiment that proves the significance of buy-and-hold investing. Investors who sold into the deep wave of short-term fear following the acquisition would have missed out on all of the value creation highlighted above. Meanwhile, buy-and-hold investors who kicked emotion to the curb and held steady (or increased or started positions) have witnessed total share returns of 255% since 2000, not to mention an additional 40% gain from AbbVie shares distributed during the spinoff. That won't blow anyone away, but it includes two recessions and some pretty low-margin products.

Wondering where Abbott can go from here? The company's earnings from continuing operations have grown 63% in the first nine months of 2013 compared to the same period in 2012. Management also decided to raise the dividend by 57% for 2014. That's what makes it so difficult, yet fruitful, to take a long-term approach. You may not reap the benefits of growing businesses for years or decades down the road, but when you do it can go a long way toward stabilizing your financial future. It really is the best way to capture a multibagger.