Before we compute any debt-related calculations, or make any judgments about an MLP's fiscal fitness, we have to know exactly what we're dealing with. The chart below tells Enterprise's debt story for the next 10 years, including interest. 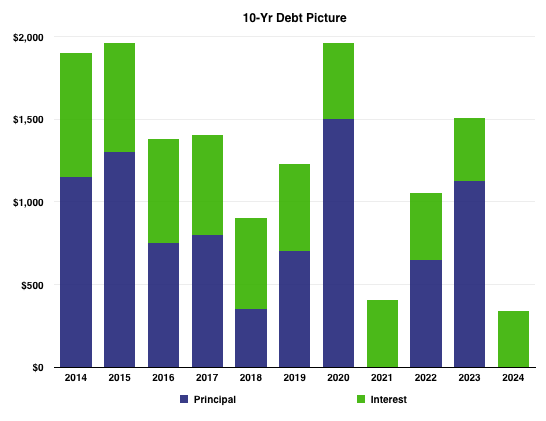 The blue bars reflect the amount of principal due each year, while the green indicates how much Enterprise will pay in interest on its fixed-rate debt. The one thing this doesn't capture is the partnership's revolving credit facility, or any floating-rate bonds it has issued, because those rates may change.

Again, this chart merely familiarizes us with Enterprise's debt picture, so that we know what we're dealing with before beginning our analysis.

2. Debt maturity
Taking a look at when a company's debt matures can tip you off to a couple of things. First, the further out the debt matures, the better, especially right now when many energy companies are spending beaucoup bucks bringing major infrastructure online. Those new projects will be up and running -- and generating cash -- before its bill comes due. The one caveat to this is the impact that duration has on interest rates: The longer the maturity, the higher the rate.

Here's how Enterprise's debt breaks down over time: 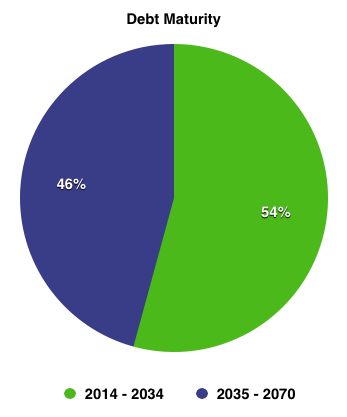 When we look at the same statistics for Kinder Morgan Energy Partners and Energy Transfer Partners, we can see how strong Enterprise's debt portfolio really is. Kinder Morgan has 33% of its debt due in the years between 2035 and 2070, while Energy Transfer has 32% due during the same period. The average interest rate on KMP's bonds due by 2044 is 6.03%, and for ETP, it's 6.37%. Again, Enterprise looks stronger on this front.

3. Debt to Adjusted EBITDA
As we begin to get a better handle on Enterprise's debt, we've got to take a look at the obvious question: Is the partnership generating enough cash to pay it off? For that we consider the debt-to-adjusted EBITDA ratio. 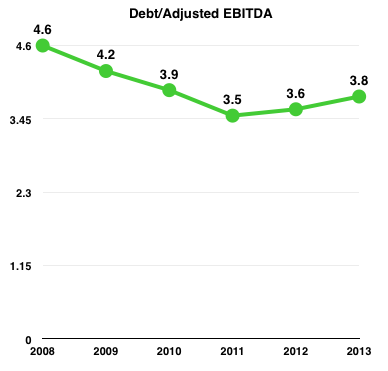 Using actual data from the first three months of this year, and the last month of 2012, we can see that Enterprise is sporting a ratio of 3.8 times debt to EBITDA. This is a relatively strong figure for an MLP. In fact Kinder Morgan's ratio is about 3.8 times, as well, while Energy Transfer Partners' is higher, at 4.2 times.

This metric is important, not just because it indicates a partnership's ability to pay its debts, but because credit agencies rely on it when they issue ratings. Typically, Standard & Poor's likes to see the ratio no higher than 4.0 to 4.5 times debt-to-adjusted EBITDA for investment-grade master limited partnerships. That rating will tie in directly to the interest rates on a partnership's debt, increasing the importance of a healthy ratio.

Bottom line
By examining an MLP's 10-year debt outlook, debt maturities, and debt-to-adjusted EBITDA ratio, you really begin to see how important a good debt story is to its future success. Too much debt can ruin a credit rating if your MLP isn't generating enough cash, making capital more expensive, and hurting competitiveness down the road. Successful investing in this space is all about finding an MLP that strikes the right balance between issuing enough debt to spur growth, and developing projects that will generate enough cash to pay it off.