Las Vegas Sands, Wynn Resorts, Melco Crown, and MGM Resorts battle for the top spot in gaming stocks. The winner might surprise you.

Since the market bottomed in March 2009, gaming stocks have had a better run than most of the market. Not only were gaming stocks trading at incredible lows after operators nearly went bankrupt, the expansion in gambling in Asia has resulted in a sharp rise in revenue and profits. The result was a perfect storm for investors. 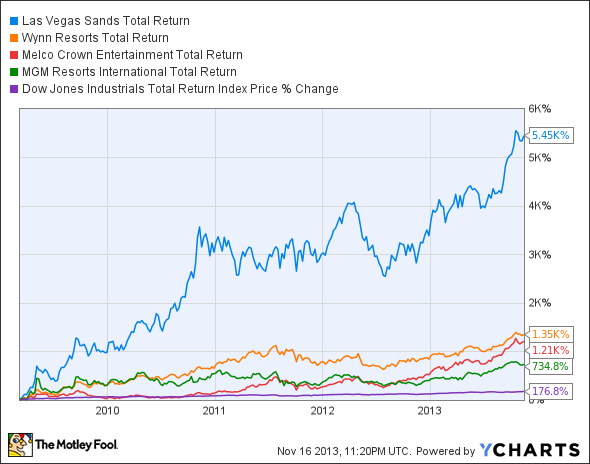 But those gains are in the past, and investors should be evaluating gaming companies on where they stand today. Below, I'll cover which company I think is best positioned for the future and which stock you should be looking at now.

The value map in gaming
Right now, the only place investors should be looking at gaming stocks is in Macau and other parts of Asia. With that in mind, I'll narrow the list of potential best stocks in gaming to Las Vegas Sands (LVS 1.19%), Wynn Resorts (WYNN), Melco Crown (MLCO 0.07%), and MGM Resorts (MGM 0.77%). The first three generate most of their revenue from Macau, while MGM owns 51% of MGM China.

Melco Crown is clearly most expensive based on past EBITDA and MGM Resorts is the cheapest, but that doesn't tell the whole story.

Growth is key in gaming
The table above only tells part of the story. What it doesn't tell us is where these companies will get growth in the future. Here are the key developments in the works for these companies.

The locations of these resorts are laid out on the map below. Each company is expecting around 500 table games at each resort, but that'll be up to the Macau government and presents some risk to potential profitability.

Which should you buy now?
Considering the risk at Studio City and the unknown potential in the Philippines, I don't think Melco Crown is worth the steep EV/EBITDA multiple right now. I think investors would be better off buying Las Vegas Sands than Melco Crown.

I think the real opportunity for investors lies in companies that have yet to build operations on Cotai. Wynn Diamond could double the company's revenue and EBITDA when it opens in 2016, making this a company I'll stick with long-term. But this quarter, I think the best bet in gaming is MGM Resorts.

MGM trades at the lowest EV/EBITDA multiple and it has tremendous upside in Las Vegas and Macau. In Las Vegas, the gaming and non-gaming market is just starting to pick up steam and CityCenter has yet to contribute significantly to results. I think EBITDA growth of 10% is achievable for the next few years in Las Vegas.

In Macau, MGM China generated $576 million in EBITDA in the first three quarters of this year and a new Cotai result will more than double that. It's possible that MGM China will generate $2 billion in annual EBITDA by the end of 2016, nearly as much as the entire company right now.

To top it off, MGM has some of the best assets to capitalize on online gaming. Moving gaming online has huge potential and brands like MGM Grand and Bellagio would gain a lot of gamblers. Online gaming is pure upside for MGM.

Foolish bottom line
None of these gaming stocks are cheap, so I wouldn't be putting too much of my portfolio in gaming stocks right now. With that said, I also don't think investors should be selling any of these stocks except for Melco Crown.

Las Vegas Sands has yet to see a full year of operations from Sands Cotai Central, and its valuation metric above is inflated as a result. It doesn't have the same growth potential from new resorts considering its large base, but it's a rock on Cotai. The same goes for Wynn Resorts, which is a solid operator with upside when it enters Cotai.

Fool contributor Travis Hoium manages an account that owns shares of Wynn Resorts. The Motley Fool has no position in any of the stocks mentioned. We Fools may not all hold the same opinions, but we all believe that considering a diverse range of insights makes us better investors. The Motley Fool has a disclosure policy.