Berkshire Hathaway (NYSE:BRK-A) (NYSE:BRK-B) recently disclosed its most up-to-date stock holdings, and the company run by Warren Buffett has recently bought even more stock in one big bank.

While many people know of Berkshire Hathaway's $19.1 billion position in Wells Fargo (NYSE:WFC), some may be surprised to see that Buffett has been steadily adding to his holding of US Bancorp (NYSE:USB) over the past year: 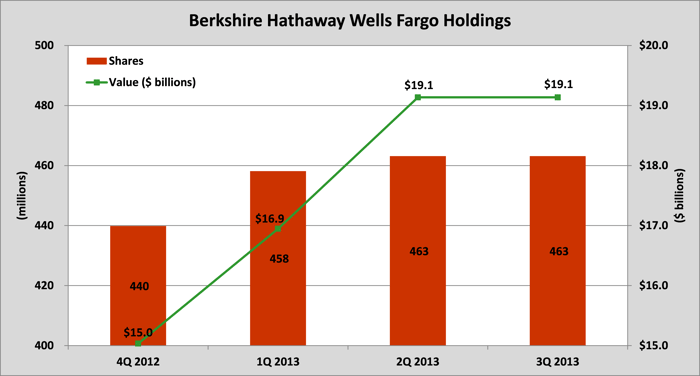 Since Buffett and Berkshire Hathaway have clearly shown greater affinity for Wells Fargo, where the value of the shares held is roughly six times higher, it is certainly interesting to see the continual purchases of US Bancorp shares:

While it would be easy to say the roughly $70 million in share purchases is inconsequential, when you consider that Buffett only added to his position in only four of the 42 companies that Berkshire Hathaway held in the second quarter (and one almost immaterially so), I believe this is something that shouldn't be ignored.

So why does Buffett keep buying stock in US Bancorp? Although he comes from the Benjamin Graham school of value investing, it certainly isn't because the bank is "cheap" relative to its peers. US Bancorp's 3.1 price-to-tangible book value (which measures the premium investors are willing to pay relative to the actual equity on the bank's balance sheet) is among the highest in the industry. It is also well above that of other Berkshire Hathaway positions: Wells Fargo with its 2.1 P/TBV and Bank of America (NYSE:BAC), which checks in at 1.2. And while it has a solid dividend yield (which Buffett is also known to prefer) at 2.4%, US Bancorp isn't at the top of the industry in that respect, either.

While I can't speak with Buffett directly -- but I'd love to have the $1.1 million needed to give to charity so I could have a lunch with him -- I suspect the answer lies not because US Bancorp is cheap but simply because it's a great business. It is unparalleled in its ability to generate returns on assets (1.65%) and equity (15.8%) while also operating as one of the most efficient banks with an efficiency ratio of 52.4%. In almost all major metrics, US Bancorp is often at the top of the industry.

So often in investing we attempt to find the next great bargain or the next off the radar stock -- but in the steady stream of additional US Bancorp stock purchases, Buffett shows that he continues to invest by his old adage that "It's far better to buy a wonderful company at a fair price than a fair company at a wonderful price," which is something we should all keep in mind.