Ankush Shaw
(AnkushShaw)
Author Bio
As an analyst and financial writer, assisting the readers in taking more educated investment decisions based on first hand analysis is my primary objective.

In an earlier post, I made the case that stock prices would continue to surge in light of the increasing correlation between stock prices and the Federal Reserve's quantitative easing program -- and that's exactly what is happening. In fact, it's pretty clear that QE is one of the main catalysts driving stock prices higher across the board. And there's no reason to believe (as of now) that this trend cannot continue going forward.

However, one interesting trend is that the correlation between QE and equity prices is greater for small-cap stocks than for large caps, as is evident in the following chart. The chart depicts the relationship between the size of the Federal Reserve's balance sheet and the performance of three broad-market ETFs, two of which belong to the small-cap category. These are the iShares Russell 2000 Index (NYSEMKT:IWM) and the Vanguard Small-Cap (NYSEMKT:VB) ETF. Large caps are represented by the SPDR S&P 500 (NYSEMKT:SPY), which tracks the performance of the blue-chip S&P 500 index. 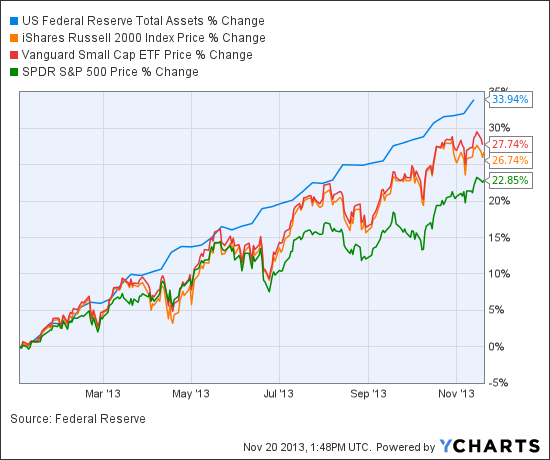 Small caps continue to outperform
Small-cap stocks have had a dream run thus far in 2013. Not only have they outperformed their large-cap counterparts, but they've also strengthened the overall uptrend in broader equities thanks to their huge coverage of stocks.

In fact, over the past year, the iShares Russell 2000 ETF and the Vanguard Small-Cap ETF have both returned close to 40%, while the SPDR S&P 500 has fetched about 30%.

Investors' risk appetite is clearly on the rise, as they are now willing to accept the additional risk premiums of small caps in exchange for potentially higher returns. This is fairly evident in the fact that most of the small caps have witnessed a strong surge in the recent past.

There are no concrete signs of QE tapering in the near future, especially with Janet Yellen, a staunch proponent of the Fed's stimulative monetary policies, set to succeed Ben Bernanke as chair of the Federal Reserve. This could be vital for the small-cap space, as this is most likely to trigger the continuation of the risk-on environment among investors seeking the "small-cap premium," thereby making a forward-looking bullish statement for the small caps.

In addition to this short-term bullish outlook, let's have a closer look at small-caps' attributes in order to show why small caps could continue to outperform their large cap counterparts.

A look at the individual attributes
Although the ETFs track a similar slice of the broad equity market, there are vital differences that investors should note. While the Vanguard ETF might be a cost-effective choice, it does lag the iShares offering in one aspect: coverage.

Still, the silver lining for both the ETFs is that they are largely allocated toward the financial sector (around 24% for both), which has been, and could continue to be, one of the best-performing sectors.

Further, as both products are functions of the small-cap universe, they will be more sensitive to U.S economic conditions, as small caps derive most of their revenue from the domestic economy. And with the U.S economy slowly but surely making strides toward continuous improvement, these small-cap ETFs could surely turn out to be winners in years to come.

Meanwhile, ETF shareholders have invested about $8.1 billion in the Vanguard Small-Cap ETF. However, one of the best features of this ETF is its expense ratio of just 0.1%, which makes it an extremely low-cost choice.

The bottom line
With all that being said, it is prudent for investors to consider these funds' risk-return trade-off, as they both demand a slightly above-par risk tolerance. Further, their valuations stand at elevated levels, especially considering the sharp uptrend these products have experienced. Nevertheless, their prospects of continuing to outperform the market look bright.