Please ensure Javascript is enabled for purposes of website accessibility
Log In Help Join The Motley Fool
Free Article Join Over 1 Million Premium Members And Get More In-Depth Stock Guidance and Research
By Sean Williams - Updated Oct 9, 2018 at 11:17AM

The Patient Protection and Affordable Care Act outlines eight ways you can be exempt from the individual mandate and its penalties. Do any apply to you?

The official start of enrollment under Obamacare kicked off roughly seven weeks ago under less than ideal circumstances, and early enrollment figures, especially from the federally run website, Healthcare.gov, have been nothing short of dismal.

Despite the opposition's cries for repeal and a relatively poor start -- largely blamed on a mixture of poorly constructed IT architecture and the government not allotting enough time to test the system -- the keystone of the Patient Protection and Affordable Care Act, known as the individual mandate, has not been delayed and is still expected to go into effect on Jan. 1.

As a refresher, the individual mandate is the actionable part of the PPACA that requires individuals to purchase health insurance of face a penalty in 2014 of the greater of $95 or 1% of their annual income. This penalty increases in size through 2016, when it equates to the greater of $695 or 2.5% of annual income should an individual choose to go without insurance. Each year after 2016, it will increase by the inflation rate. 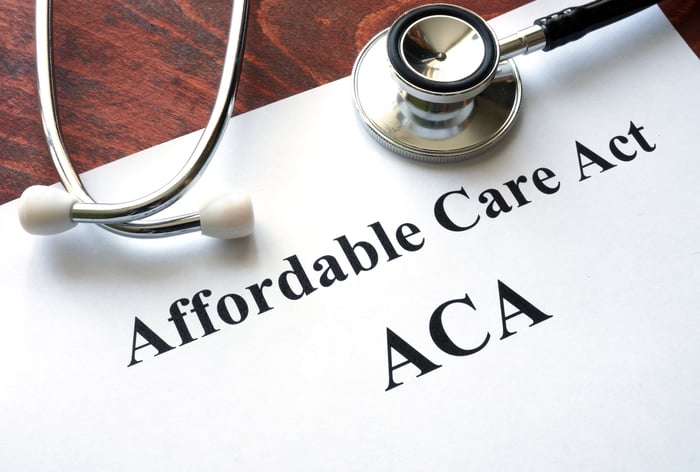 As you might imagine, a good chunk of people need to purchase health insurance, renew their existing plan, or choose to go without. There are, however, a select number of groups -- eight to be exact -- that are exempt from the individual mandate, and therefore its penalties. Let's take a closer look at which groups are currently exempt under the PPACA's laws.

1. Select religious groups
The first exemption relates to those religious sects whose beliefs forbid them from obtaining health insurance, such as the Amish. For those of you thinking of starting your own religious sect to remain exempt from the individual mandate, you may want to have a back-up plan; there are pretty cut-and-dried rules as to what qualifies. According to the IRS, an individual would need to prove membership in a qualified exempt religious sect and have waived all Social Security benefits and rights. Chances are better than not that you aren't exempt from Social Security. Furthermore, according to the IRS, the sect or division must have "been in existence at all times since December 31, 1950."

2. American Indians
One group more likely to see exemptions from the PPACA are members of federally recognized Indian tribes. The U.S. Department of Indian Affairs maintains a federal registry of all qualifying tribes, which equates to more than five full pages of exemptions. You can check to see if your tribe qualifies by going here (link opens PDF file). Keep in mind that this doesn't mean American Indians are all uninsured, because that isn't the case. It just means that Indian Health Service and tribal-run health facilities take care of their health needs on tribal land. Should American Indians choose to live away from their tribal land, they are free to obtain health insurance on their state- or federally run health exchange under Obamacare.

3. Citizens who do not need to file a tax return
In addition to qualifying religious sects and American Indians, those who fall below the federal household income threshold and don't need to file federal income taxes are exempt from the individual mandate. Simply put, the PPACA is all about bringing affordable health insurance to Americans. If someone's annual income is below the poverty level, they wouldn't be able to afford health insurance. Therefore, they aren't going to be penalized if for some reason they choose not to maintain health insurance.

4. Those who are incarcerated
No, this is not a calling card for you to go commit a crime to get out of Obamacare! But the truth is that people who are incarcerated in jail, prison, or other penal institutions are exempt from the individual mandate. Once you're free, though, you'll be expected to purchase health insurance unless you meet one of these other seven exemptions.

5. Citizens who would be required to spend more than 8% of their income on health insurance premiums
If you do make more than the income threshold that requires you to file income taxes, you're not out of luck just yet. If you as an individual plan holder or member of a company-sponsored plan pay more than 8% of your annual salary out of pocket in premium costs based on the lowest-cost plan available (i.e. bronze), then you are exempt from the individual mandate under the PPACA's laws. Keep in mind this is a fluid figure that could change on a year-to-year basis. Also, the employer mandate should crack down on incidences of this happening when it goes into full effect on Jan. 1, 2015. When fully enforced, it will penalize businesses with 50 or more full-time employees that aren't offering health insurance to employees and that aren't subsidizing health insurance premiums in cases where premiums hit a certain threshold of an employees' annual salary.

6. Those who can claim a hardship
It seems that every law has to have its gray area, and if there's an exemption that can sometimes be difficult to pinpoint, it's those persons claiming a hardship. The concern here is that a hardship doesn't meet one definition, but has roughly one dozen noted exemptions according to the Centers for Medicare and Medicaid Services guidelines. Hardships listed include being evicted within the past six months, being homeless, recently experiencing the death of a close family member, filing bankruptcy within the past six months, or being found ineligible for Medicaid because your state didn't expand its Medicaid program. These are just a handful of the hardships which may grant you an exemption. You can read the full list at the CMS' marketplace exemption website (link opens PDF file).

7. Those who are not lawfully present in the U.S.
Put plainly, those persons who are not U.S. citizens or U.S. nationals (i.e. without lawful presence) are exempted from the individual mandate. That might seem like a double-standard to let non-citizens off the hook, but there's no way to enforce a penalty on someone that most likely isn't even paying taxes or filing them in the U.S. in the first place!

8. Those citizens who go uninsured for a period of less than three months per calendar year
Go ahead and throw an asterisk next to this one, because it does assume that you'll be purchasing health insurance for nine of the 12 months out of the calendar year. However, the PPACA allows you to go without coverage for a period of up to three months per year without being penalized. This is to account for things like changing jobs or perhaps a temporary hardship like moving.