CONSOL Energy (NYSE:CNX) made big news when it agreed to sell 5 of its domestically focused thermal coal mines. However, that doesn't mean that coal is dead in this country. In fact, the company's CEO expressed a particularly positive outlook for U.S. coal when speaking to college students in West Virginia.

The pendulum still swings
"You can only push back on your base fuels so far until the economics change so radically that it starts to hurt your society," CONSOL CEO Brett Harvey said. "Then you'll push back toward it." Right now coal is on the outs. However, at some point in the future, he's suggesting that this will change.

One of coal's big problems is the relatively low price of natural gas. According to the U.S. Energy Information Administration, or EIA, the Northeast has been particularly aggressive in shifting away from coal. Over the last year or two, peak demand periods have seen natural gas rise to over 50% of the region's energy mix. 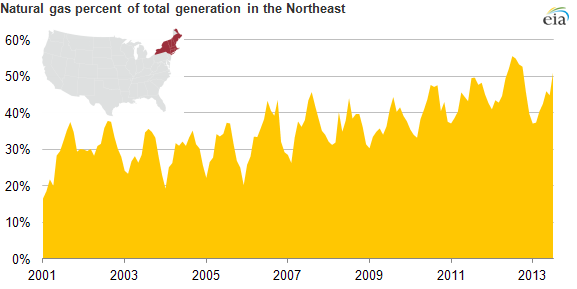 That's been a big issue for coal miners like Alpha Natural Resources (NYSE: ANR), which generates about 45% of sales from its Eastern coal assets. In fact, the EIA notes that "there are plans to retire the two largest coal-fired power plants in the region, as well as one of the region's nuclear units." So the shift away from coal in the Northeast is only going to accelerate.

This, along with the over 200 other coal plant closures Alpha is expecting across the country, helps explain why CONSOL decided to focus instead on its natural gas assets and export coal operations. Both appear to have better growth prospects right now. The broadly negative view of coal, however, could change quickly if natural gas prices move higher.

The flip side of the coin
The Northeast is the perfect example of the problem that could pose. The EIA points out that regional transmission organizations have emergency plans to procure fuel oil. Why? Because a lack of pipeline capacity in the winter of 2012-13 caused a spike in wholesale electricity prices in New England and New York as demand for natural gas outstripped supply.

High electricity prices could become the norm if gas prices go up and stay up because of increased demand from utilities, gas exports, and transportation uses. Higher prices would cause utilities to rethink their fuel choices as angry customers complain about their electric bills and utility profits slump.

As it stands, Powder River Basin, or PRB, and Illinois Basin, ILB, coal are price competitive with natural gas today. That's been a support for miners like PRB-focused Cloud Peak Energy (NYSE:CLD) and ILB centered Alliance Resource Partners (NASDAQ:ARLP). While competitors, including CONSOL and Alpha, have fallen into the red, this pair has remained handily in the black through the coal industry's darkest days. This shows that there remains demand for the fuel even as it has fallen out of favor.

In fact, Alliance has actually been posting record results as utilities switch from Central Appalachian coal to cheaper ILB coal. And while demand for the relatively cheap coal Alliance and Cloud Peak sell has been stable or growing, it could quickly pick up if natural gas prices stay at recent levels or head higher.

Not so crazy
It's unlikely that gas prices will move so high that gas plants are shut and coal plants are built instead. Still, CONSOL's Harvey points to history as a guide: "If you go back to just at the turn of this century, coal was on the outs with an administration. Then it shifted back..." That could easily happen again, leading to a coal industry resurgence.

Although it would take a sustained natural gas price increase for Alpha to really benefit, it wouldn't require much to bolster results at Alliance or Cloud Peak. And the problems the Northeast power system has faced in acquiring natural gas in recent years shows that a coal rebound isn't such a far fetched idea.