Resurgent Finnish tech giant Nokia (NYSE:NOK) is a company on the move, just not with Alcatel-Lucent (NYSE: ALU) according to recent reports. 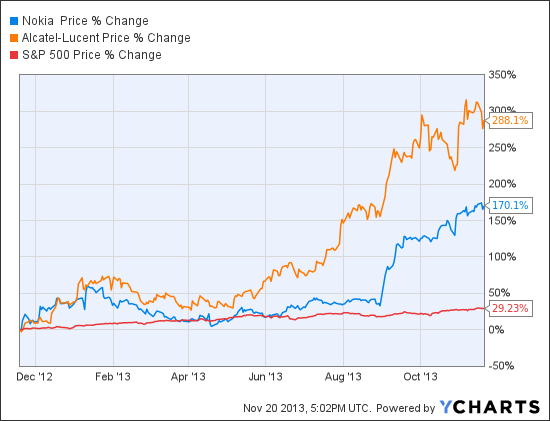 Both companies have been on fire over the last year, outperforming the S&P 500 by well over 100% in the last twelve months. The parallels don't stop there either.

Both Nokia and Alcatel-Lucent are doubling down in their attempts to carve out meaningful, and more importantly profitable, presences in the ferociously competitive communication equipment space.

For Nokia, this increased emphasis in the wake of the conclusion of its communication equipment joint venture with Siemens and the agreement to sell Nokia's iconic handset business to Microsoft at the start of next year. In Alcatel-Lucent's case, it never really abandoned the communication equipment space. Rather it’s attempting to successfully navigate beyond the multi-year mess it's been dealing with since French Alcatel merged with American Lucent Technologies in 2006.

Nokia's and Alcatel-Lucent's names have been discussed as possible partners or even merger candidates over the last several months, especially as scale often serves as a key advantage in the communication equipment space.

However, all that came to a screeching halt when Nokia's networking head recently relayed a bid for Alcatel-Lucent, or some part of its business, is no longer in the cards.

No dice
Reports that Nokia was weighing a possible offer to acquire at least one of Alcatel-Lucent's business units originally surfaced in September. According to one source quoted by Reuters, Nokia engaged in "on-again, off-again" internal discussions about potentially making an offer for Alcatel-Lucent's wireless networks unit.

The conventional wisdom was the combined scale of the two companies would likely create significant cost savings and synergies that would allow Nokia to more price competitive in the notoriously low-margin business of building wireless networks for telecom companies. This would then enable Nokia to more effectively challenge Ericsson's and Huawei's dominance in the business of building out wireless networks for telecom carriers.

However, according to multiple sources, no formal meetings between Nokia and Alcatel-Lucent actually occurred.

This too might be for good reason as well.

Emerging competitors
After the sale of its handset business closes early next year, which was recently almost unanimously approved by shareholders, roughly 90% of Nokia's sales will come from its networking business.

The company is busy looking for new CEO to lead the soon-to-be cash rich company into its post-handset years. However, Nokia's business might be taking off even before a new leader arrives. According to a recent interview with NSN head Rajeev Suri, he characterized Nokia's networking business as rapidly improving.

In the interview, Suri highlighted several recent high profile wins that demonstrate Nokia's networking resurgence, especially in the critical U.S. telecom market. Last month, Nokia landed its first contract with a first-tier U.S. telecom company when it was included in contract to help build Sprint's new Spark LTE network (Alcatel-Lucent was also part of the deal for what it's worth). As relationships and deals take years in this space, Nokia's relatively quick and surprising success with a major U.S. telecom name has given it a strong base from which to pursue new contracts with other high profile carriers.

The U.S. market is key for Nokia for another key reason. Nokia also faces less competition in this space as Chinese competitors like Huawei have been stymied as a result of concerns over security and the firm's proximity of the Chinese government.

Sorry I'm not sorry
These recent wins paint Nokia as succeeding without the need for a deal with a name like Alcatel-Lucent. In another recent interview, NSN head Suri also stated that he favored a "just wait" strategy to let market forces decide the winners and losers in this space.

With a deal between Nokia and Alcatel-Lucent now reportedly off the table and Nokia's recent wins, favoring a wait and see approach seems understandable for Nokia.

What it means for Alcatel-Lucent is far less clear.