Despite continued weakness with its KFC franchise in China, Yum! Brands stock is trading near 52-week-highs. Here's why it's not too late for investors to get in.

In particular, its famous KFC chain has had to struggle through a bevy of persistent headwinds revolving around quality issues, bad publicity, and avian flu worries in China, where Yum! had placed an inordinate amount of energy to expand, given its growth potential. Last year, for example, Yum! added 889 new restaurants in China alone, as operating profit from the region surpassed $1 billion for the first time.

In the first three quarters of 2013, however, Yum!'s operating profit in China totaled "just" $557 million, or 31.4% behind its total at the same time in 2012. Then, just when it looked like Yum! Brands' China division was about to turn the corner, the company pulled the rug out from under investors last month.

Specifically, though Yum! had repeatedly asserted confidence over the previous few months that same-store sales in China would turn positive sometime during the fourth quarter, shares plunged when management finally admitted that that wasn't going to happen in the very near future. To be sure, Yum!'s September China same-store sales declined around 11%, including a 6% gain at Pizza Hut, and a sequentially worse 13% fall at KFC.

Worse yet, Yum's primary competition in McDonald's (MCD -1.56%) seems to be crushing KFC here in the U.S., as stateside, KFC same-store sales last quarter swung from a 3% gain to a 4% decline. Meanwhile, McDonald's overall domestic comps actually squeaked out a 0.7% gain last quarter.

Here's the kicker
I suppose it might come as a surprise, then, that Yum! Brands stock has risen more than 10% over the past three weeks alone, and currently sits within just 3% of its 52-week-high.

First, make no mistake that Yum!'s China operations are recovering: Last week, the company stated that October same-store sales declined an estimated 5% in the country, including a 7% fall at KFC, and 10% growth at Pizza Hut. So while KFC's rebound hasn't happened as quickly as Yum! had hoped, it's definitely occurring. In the meantime, Pizza Hut is performing exceptionally well.

For consistency's sake, let's go ahead and update last month's chart to get a better visual: 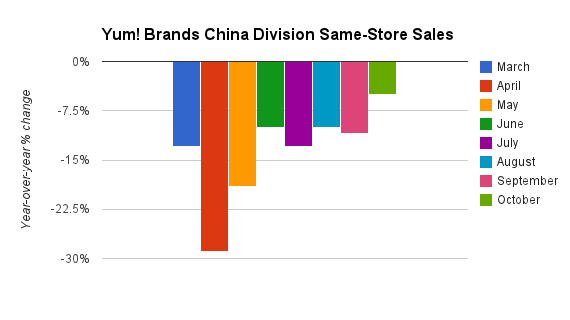 Here in the U.S., for example, Yum! has already outlined perfectly reasonable plans to double Taco Bell sales to $14 billion by 2021. But how, exactly, is that feasible in this seemingly saturated market in which Yum! already operates more than 5,700 Taco Bell locations?

Remember, at the end of 2012, McDonald's already operated around 14,000 locations in the U.S. alone, and Taco Bell has yet to really start expanding into smaller rural locations as its larger competitor already has.

But Yum! also stated that it only needs to add around 2,300 domestic locations over the next eight years to reach its goal -- so where will the balance of its planned sales increase come from? Look no further than additional dayparts, including a nationwide breakfast rollout by the end of 2014, as well as a concerted effort to increase its relatively tiny share of the "afternoon snack" market.

What's more, Yum! has relentlessly continued its expansion in the Middle Kingdom, adding 458 new KFC and Pizza Hut units in China year to date. With regard to its long-term goals, consider Yum! CEO David Novak's comments earlier this year:

In the United States, McDonald's has 14,000 traditional units in a population of over 310 million. We expect to have at least that many units in China with the consuming class growing from 300 million to 600 million over time and disposable income growing along with it. We will be everywhere that matters in China and have the best locations in every town.

Finally, remember that the fast-food world consists of much more than just China and the U.S. A few weeks ago, Yum! announced the opening of its 40,000th restaurant, which it purposefully placed in India to "spotlight emerging market leadership and growth." By 2015, Yum expects to have 1,000 total restaurants in India, and is planning to invest $10 billion in emerging markets by 2020.

Call me crazy, but that doesn't exactly scream of a company in trouble.

In the end, we're still talking about a solidly profitable, fast-growing business with incredible expansion prospects going forward. For investors who aren't swayed by today's negative headlines, the long-term rewards should be great.