The U.S. is far and away the largest consumer of both oil and natural gas. So when the U.S. changes its production and consumption habits even slightly, it has major implications around the world. With LNG exports on the horizon, we are on the brink of becoming a major energy exporter. Our emergence on the world stage is causing Statoil (NYSE:EQNR), Europe's second-largest natural gas provider, to change the way it prices natural gas. Let's look at what is happening and what it means for Europe, America, and Statoil.

The American way
Before LNG, the only way to move natural gas in bulk was by pipeline. This meant that natural gas was priced regionally instead of on a global market like oil or coal. In both Europe and Asia, most natural gas came from Russia and was sold on long term contracts at a price that was fixed to the price of oil based on a energy-equivalency basis. In contrast, the U.S. has an established market where the price of natural gas is completely independent of the price of oil. For the most part, there wasn't a major difference in the two prices. But once the natural gas boom took off in the U.S., the difference in price became striking. 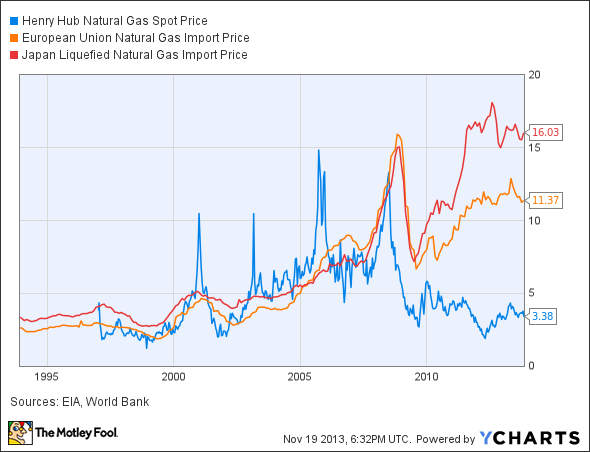 This chart right here tells you exactly why the U.S. is making a big push into the LNG export space. Despite the costs to liquefy and transport natural gas are actually greater than the price of the gas itself, the difference in price still makes it very financially lucrative to do so. A large discrepancy in gas prices not only makes for an immense opportunity for American LNG but it has also been killing Europe's global competitiveness. LNG first mover Cheniere Energy (NYSEMKT:LNG) estimates it will start making its first LNG shipments in 2015, and once that gas hits foreign markets, it will put pressure on local gas prices and potentially the way gas is priced there.

Today, we are starting to see the first cracks in Europe's long-standing gas pricing mechanism. Statoil recently announced that it will be taking a large portion of its natural gas pipeline contracts off the oil-indexed price and will they will be priced based on futures at local gas hubs. The move to market-based gas prices should help bring down prices and in turn increase Europe's competitiveness, which is why many Europeans are celebrating this. This is significant because Statoil is such a large player in the European gas market. Both Statoil and Russia's Gazprom supply about 40% of Europe's total gas demand, and selling gas-indexed oil has been a very lucrative market. The move away from indexed pricing may put a dent in Statoil's earnings, but the costs to liquefy and ship natural gas to Europe will mean that the price will not come down too significantly.

A change to America's LNG plans?
So what does this mean for America's LNG plans? In all likelihood, not much. These moves are happening because U.S.-based gas will be one of the -- if not the -- low-cost gas supplier. So it is likely that companies with plans to export LNG will continue on that tract. Also, U.S. exporters have already started to line up export contracts. Cheniere Energy and Cheniere Energy Partners (NYSEMKT:CQP) have already contracted out all of the export capacity for its first five liquefaction trains on 20-year sales agreements, so it is very unlikely that these contracts will change for quite a while.

The other aspect to consider is that not all of the U.S.' LNG is destined for the European market. Two LNG facilities in Oregon are awaiting approval to export natural gas to countries with which we do not have free trade agreements, and it is very unlikely that these LNG facilities will get demand contracts from Europe over Asia.

What a Fool believes
By the end of the decade, estimates show that the U.S. will be a net natural gas exporter. This, coupled with increasing oil production, is having a deep impact on the United States and the world. Some things, such as Statoil moving away from gas indexing and many countries starting to explore their own shale resources, are just two examples of the things we have seen happen thanks to this fundamental change. There are probably still lots of changes yet to happen, and the way things are trending, it will probably fall in favor of the U.S.